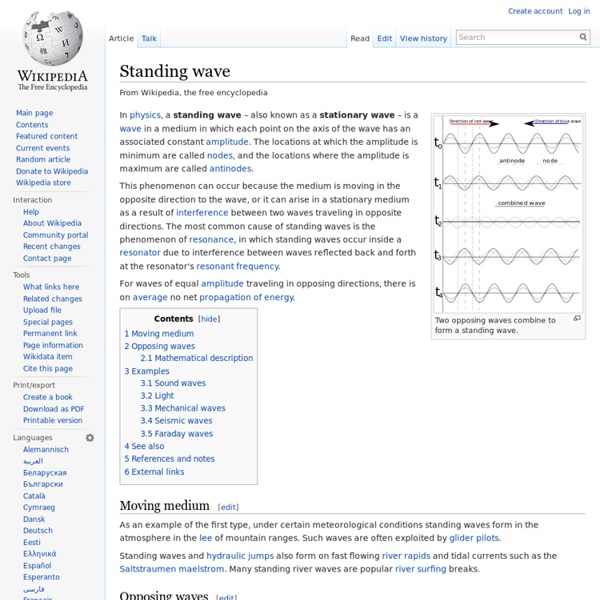 Two opposing waves combine to form a standing wave. For waves of equal amplitude traveling in opposing directions, there is on average no net propagation of energy. Moving medium[edit] As an example of the first type, under certain meteorological conditions standing waves form in the atmosphere in the lee of mountain ranges. Such waves are often exploited by glider pilots. Standing waves and hydraulic jumps also form on fast flowing river rapids and tidal currents such as the Saltstraumen maelstrom. Opposing waves[edit] In practice, losses in the transmission line and other components mean that a perfect reflection and a pure standing wave are never achieved. Another example is standing waves in the open ocean formed by waves with the same wave period moving in opposite directions. Mathematical description[edit] In one dimension, two waves with the same frequency, wavelength and amplitude traveling in opposite directions will interfere and produce a standing wave or stationary wave. and

Optics on the Web Links to optics-related applets, tutorials and web sites of interest. NOTE: Some applets no longer work with the most recent Java. If possible, try running on an earlier version. In some cases, I've found alternate applets that are similar and that will run on most browsers (I use Chrome, Safari and Firefox). If you find a link that doesn't work, please email me. Applications of Optics in Communications (Fiber Optics), Manufacturing, Medicine (including the eye) and More Societies, Organizations and Online Magazines This site contains a huge collection of tutorials and applets covering most of an introductory optics course. This is an optics tutorial for chemistry students. optics tutorial with an ophthalmic slant, including how corrective lenses work

Optical fiber cable A TOSLINK optical fiber cable with a clear jacket. These cables are used mainly for digital audio connections between devices. An optical fiber cable is a cable containing one or more optical fibers. The optical fiber elements are typically individually coated with plastic layers and contained in a protective tube suitable for the environment where the cable will be deployed. Design[edit] A multi-fiber cable Left: LC/PC connectors Right: SC/PC connectors All four connectors have white caps covering the ferrules. For indoor applications, the jacketed fiber is generally enclosed, with a bundle of flexible fibrous polymer strength members like aramid (e.g. Fibre-optic cable in a Telstra pit An optical fiber breakout cable For use in more strenuous environments, a much more robust cable construction is required. A critical concern in outdoor cabling is to protect the fiber from contamination by water. Capacity and market[edit] Reliability and quality[edit] Cable types[edit] Jacket material[edit]

John C. Lilly John Cunningham Lilly (January 6, 1915 – September 30, 2001) was a American physician, neuroscientist, psychoanalyst, psychonaut, philosopher, writer and inventor. He was a researcher of the nature of consciousness using mainly isolation tanks,[1] dolphin communication, and psychedelic drugs, sometimes in combination. Early life and education[edit] John Lilly was born to a wealthy family on January 6, 1915, in Saint Paul, Minnesota. His father was Richard Coyle Lilly, president of the First National Bank of St. Lilly showed an interest in science at an early age. While at St. Despite his father's wishes for him to go to an eastern Ivy-league college to become a banker, Lilly accepted a scholarship at the California Institute of Technology to study science. In 1934, Lilly read Aldous Huxley's Brave New World. Lilly became engaged to his first wife, Mary Crouch, at the beginning of his junior year at Caltech. At the University of Pennsylvania, Lilly met a professor named H. Research[edit]

Diffraction Diffraction pattern of red laser beam made on a plate after passing a small circular hole in another plate Diffraction refers to various phenomena which occur when a wave encounters an obstacle or a slit. In classical physics, the diffraction phenomenon is described as the apparent bending of waves around small obstacles and the spreading out of waves past small openings. These characteristic behaviors are exhibited when a wave encounters an obstacle or a slit that is comparable in size to its wavelength. Similar effects occur when a light wave travels through a medium with a varying refractive index, or when a sound wave travels through a medium with varying acoustic impedance. Diffraction occurs with all waves, including sound waves, water waves, and electromagnetic waves such as visible light, X-rays and radio waves. Richard Feynman[3] wrote: The formalism of diffraction can also describe the way in which waves of finite extent propagate in free space. Examples[edit] History[edit] where