Types of Solar and Lunar Eclipses 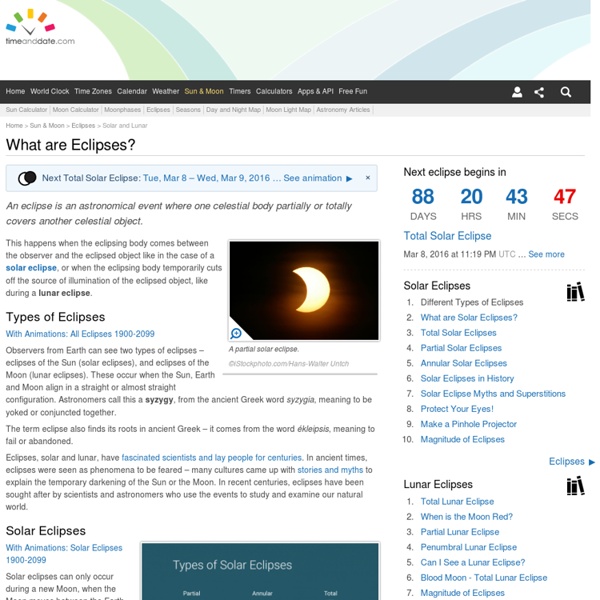 Supermoon – Super Moon A Supermoon is a full Moon or a new Moon at its closest point to Earth; also called perigee. A Supermoon looks around 12 to 14% bigger than its counterpart, the Micromoon. Perigee and Apogee The Moon's orbit around the Earth is not a perfect circle, but elliptical, with one side closer to the Earth than the other. The point on the Moon's orbit closest to the Earth, is called the perigee and the point farthest away is the apogee. 238,000 Miles on Average This means that the distance between the Moon and Earth varies throughout the month and the year. Moon Phases worldwide When a full Moon or new Moon coincides with being closest to Earth, it is called a Supermoon, Super Full Moon, or Super New Moon. A Micromoon, on the other hand, is when a full or a new Moon is farthest from the Earth (apogee). Not an Official Name Supermoon is not an official astronomical term. There are currently no official rules as to how close or far the Moon must be to qualify as a Supermoon or a Micro Moon.

2014 Lyrids meteor shower In 2016, the Lyrids are expected peak on April 22 and 23. A Full Moon on April 21, 2016 will make it difficult for observers to view the meteor shower. When Can I See the Lyrids? The Lyrid Meteor Shower is usually active between April 16 and April 25 every year. The best time to see shooting stars from the Lyrids is after nightfall and before dawn, weather permitting, of course. Sunrise and Sunset in my City Dust From Comet Thatcher The Lyrids are created by debris from comet Thatcher, which takes about 415 years to orbit around the Sun. Where Can I See the Lyrids? Considered to be the oldest known meteor shower, the Lyrids are named after constellation Lyra. While people in the Northern Hemisphere are best located to view the Lyrids, those in mid Southern Hemisphere latitudes can also see the shower between midnight and dawn. Astronomers suggest looking up towards the East to see shooting stars from the Lyrids, the table below shows the exact direction of the Lyrids from your location.

Earth & Space Science Essential Science for Teachers Exploring topics that range from soil to the solar system, Essential Science for Teachers: Earth and Space Science provides participants the opportunity to increase their science content knowledge and develop new understandings of how this content connects to K - 6 classrooms. The Geologic Timeline "Which came first, the chicken or the egg?" For Further Information When you see the following icon in the video, click at left for "A Closer Look" This course is composed of eight sessions, each with a one-hour video program addressing a topic area in Earth and Space science that emphasizes the science content that is likely to be part of any elementary school science curriculum. Posing the question "What is Earth’s structure and its place in the universe?"

Monthly Notices of the Royal Astronomical Society Top 10 Best Astrophotographers in the World | TopTen 2015 The sky that we usually see and is considered to be an ordinary thing is in fact full of many wonders and secrets that need to be revealed but how to do this? Discovering more about the secrets that are hidden in the sky is costly and requires spending a long time trying to see the invisible objects and observe the changes that take place in front of your eyes using special equipment. The question is how to record all what you see and the amazing beauty of the invisible objects that can be found in the sky to enjoy watching them whenever you want? It is the role of the astrophotographers who come to dazzle us with the photos that they capture and are considered by many people to be unbelievable because of the stunning beauty that can be found in them. 10 Arild Heitmann – Norway Arild Heitmann is a landscape photographer whose favorite time to capture his photographs is winter. 9 Luc Perrot – France 8 Troy Casswell – Australia 7 Colin Legg – Australia 6 Julie Fletcher – Australia

Astronomers spy most distant Solar System object ever NASA/ESA/G. Bacon/STScI The Kuiper belt lies beyond Neptune. Astronomers have spotted the most distant object ever seen in the Solar System: a frigid world that currently lies 103 times farther from the Sun than Earth does. Scott Sheppard, an astronomer at the Carnegie Institution for Science in Washington DC, reported the object on 10 November at the American Astronomical Society’s Division for Planetary Sciences meeting in National Harbor, Maryland. The object sits beyond the edge of the Kuiper belt (home to Eris and Pluto), and into the inner fringes of the next part of the Solar System, the Oort cloud. But astronomers have not tracked the newfound object for long enough to know its full path, and there is a chance that it will travel much closer to the Sun than its current distance of 103 astronomical units (au; 1 au is approximately 150 million kilometres). Still, the discovery gives a rare glimpse into the fringes of the Solar System.

[Link]: KIC 8462852, aka WTF star, "the most mysterious star in our galaxy", ETI candidate, etc. - Less Wrong Discussion KIC 8462852, or the WTF (Where's the Flux?) star, is an F-type main sequence star about 1,480 ly away. It's a little larger and more massive than the sun, and a few times brighter. Age is uncertain, but probably older rather than younger. Kepler observations over the last few years reveal very strange large and aperiodic flux variations (up to 20%) - of the general form predicted by some ETI megastructure models. The star's fluctuations were discovered by the PlanetHunters team. Abstract of the WTF paper: Over the duration of the Kepler mission, KIC 8462852 was observed to undergo irregularly shaped, aperiodic dips in flux down to below the 20% level. From "Comets or Aliens?" In a another recent paper Jason Wright et al discusses the WTF star in more detail and critiques the comet theory. The Search for Extraterrestial Civilizations with Large Energy Supplies. Jason Wright discusses WTF here on his blog. Big reddit discussion on r/askscience here.

Physics and Astronomy Online Portal Cosmos is a fantastic show about ideological conversion more than it’s about science Like Carl Sagan before him, Neil deGrasse Tyson is constructing a cult of personality. Also like Sagan, that personality is not his own. In both its versions, Cosmos has had to serve a number of masters — they’ve both had to educate, to entertain, and to bring in advertising. By far their most defining goal, however, the one that most differentiates them from both the Planet Earths and Bill Nyes of the world, is ideological. Cosmos was, and very thankfully still is, an unabashed attempt to exalt the scientist and to advance the scientific worldview in its entirety, with as few tactful omissions as possible. In many scientifically inclined circles, that’s a borderline offensive accusation, and the nervousness has only become more acute since Sagan’s day. Who couldn’t love that face? Both Sagan’s Cosmos and Tyson’s are explicit and unmoving on the issue of faith: belief without evidence is the antithesis of reason, and irreconcilable with a scientific understanding of the universe.