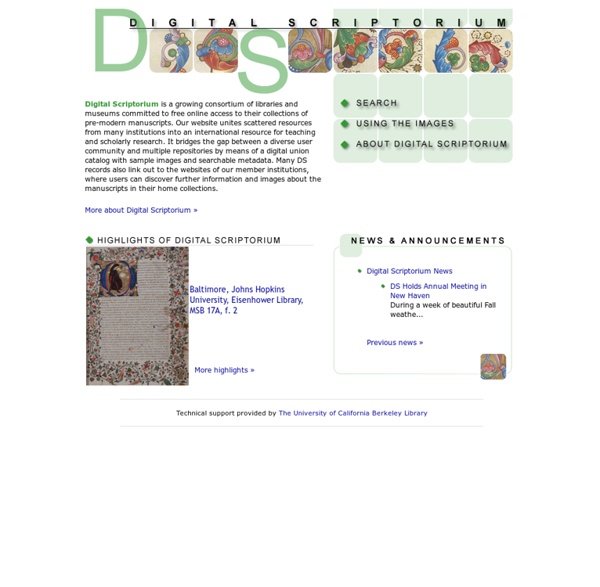 Manuscriptorium Hypertext Book of Hours - Introduction The calendar used in Europe during the Middle Ages followed a system developed originally by the ancient Romans. In the Roman system, the year was divided into twelve months, as it is in the modern calendar, but the days of the months were not numbered consecutively as they are today. Instead, three key days were identified by name: Kalends (the 1st), Ides (the 13th or 15th, depending on the month), and None (the ninth day before Ides). All other days were related to these two, by saying, for example, "today is the second day before the Ides of March." One important difference between the Roman system and the one employed during the Middle Ages was that medieval Europeans superimposed on the Roman calendar a list of the Christian feast days. The twenty-fifth day in the month of December, for example, was equated with the Feast of Christ's Nativity ("Christmas"), the fourteenth of February was called "St.

Medieval Manuscripts on the Web (digitized manuscripts) National Library of Australia Digital Collections : most items in this ongoing effort are related to Australian history, but there are images from two Books of Hours (MSS 1097/9 and 1097/6). ALO: Austrian Literature Online: Die digitale Bibliothek : complete digitizations of Austrian documents from the 11th C to the present. The easiest way to find the medieval and Renaissance manuscripts is via the Year Index. In German and English. Vienna Österreichische Nationalbibliothek The Digital Reading Room is a portal to various digitised holdings, including Manuscripts . Brussels Belgica : the digital library of the Bibliothèque royale de Belgique/ Koninklijke Bibliotheek van België. Liège Université de Liège The ULg Library has digitized 49 medieval and Renaissance manuscripts, accessed through Gallery page. The Medieval Bestiary: Animals in the Middle Ages : includes images from many manuscripts. Calgary University of Calgary The Cotton Nero A.x. Toronto University of Toronto Fisher Library Vancouver

Book of hours Book of hours, Paris c. 1410. Miniature of the Annunciation, with the start of Matins in the Little Office, the beginning of the texts after the calendar in the usual arrangement. Books of hours were usually written in Latin (the Latin name for them is horae), although there are many entirely or partially written in vernacular European languages, especially Dutch. The English term primer is usually now reserved for those books written in English. The typical book of hours is an abbreviated form of the breviary which contained the Divine Office recited in monasteries. History[edit] Even this level of decoration was more rich than that of most books, though less than the lavish amounts of illumination in luxury books, which are those most often seen reproduced. The book of hours has its ultimate origin in the Psalter, which monks and nuns were required to recite. Many books of hours were made for women. Decorations[edit] The luxury book of hours[edit] Gallery[edit] Selected examples[edit]

Catalogue of Digitized Medieval Manuscripts: About Us Education BA in English, University of California, BerkeleyM.Phil and D.Phil, English Language and Literature, 1100-1500 University of Oxford, 2005 Interests I work on Old English, Middle English, Latin, and Anglo-Norman Literature, particularly lesser-known texts sitting at the blurry intersections of historiography, hagiography, and romance. My research focuses on the material and ideological processes of textual composition, transmission, and circulation in medieval England. Paleography, codicology, and philology ground my investigations of translation, redaction, revision, and list-making. Selected Works “The Auchinleck Manuscript,” in the Wiley-Blackwell Encyclopedia of Medieval British Literature, ed. “Encountering the Dartmouth Brut in the Midst of History,” in Digital Philology: A Journal of Medieval Cultures 3:2 (2014), 323- 330. “The Archive,” in Medievalism: Key Critical Terms, ed. Scribal Authorship and the Writing of History in Medieval England.

Image database of medieval and renaissance manuscripts that unites scattered resources from many institutions. by nda_librarian Apr 28