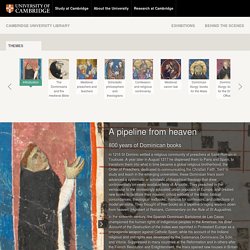 A year later in August 1217 he dispersed them to Paris and Spain, to transform them into what in time became a global religious brotherhood, the Order of Preachers, dedicated to communicating the Christian Faith. Sent to study and teach in the emerging universities, these Dominican friars soon advanced a systematic or scholastic philosophical theology that drew controversially on newly available texts of Aristotle. They preached in the vernacular to the increasingly educated urban populace of Europe, and created new books to facilitate their mission: critical editions of the Bible; biblical concordances; theological textbooks; manuals for confessors; and collections of model sermons. 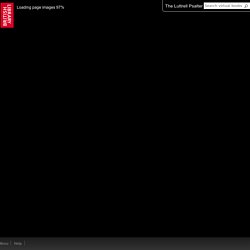 To view this version with this browser please click here to install the free Google Chrome Frame plug-in. You could also update to the latest version of Internet Explorer or install Google Chrome. Alternately you can view the accessible version of this website. Sorry your browser does not display at a high enough resolution to view this version of Turning the Pages™. Please view our technical page for more details about browser and device support. If you just happen to have shrunk your browser to a tiny size, enlarge it and refresh the page to view. The British Library MS Viewer. 1,000-Year-Old Illustrated Guide to the Medicinal Use of Plants Now Digitized & Put Online. If you don't much care for modern medicine, entire industries have arisen to provide you with more "alternative" or "natural" varieties of remedies, mostly involving the consumption of plants. 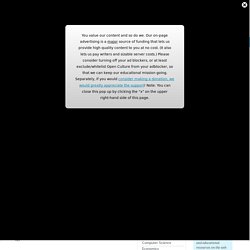 Publishers have put out guides to their use by the dozens. In a way, those books have a place in a long tradition, stretching back to a time well before modern medicine existed as something to be an alternative to. Just recently, the British Library digitized the oldest such volume, a thousand-year-old illuminated manuscript known as the Cotton MS Vitellius C III. The book, writes the British Library's Alison Hudson, "is the only surviving illustrated Old English herbal, or book describing plants and their uses. " (The sole condition note: "leaves damaged by fire in 1731. ") (Somehow one doesn't imagine those latter sections playing quite as well with today's alternative-medicine market.) Via Hyperallergic. Object moved. 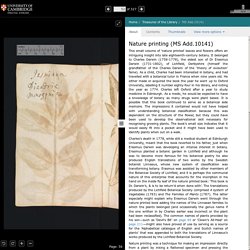 It belonged to Charles Darwin (1758-1778), the eldest son of Dr Erasmus Darwin (1731-1802), of Lichfield, Derbyshire (himself the grandfather of the Charles Darwin of the ‘theory of evolution’ fame). As a child, Charles had been interested in botany, and had travelled with a botanical tutor in France when nine years old. He either made or acquired the book the year he went up to Oxford University, labelling it number eighty-four in his library, and noting the year as 1774. Charles left Oxford after a year to study medicine in Edinburgh. As a medic, he would be expected to have a knowledge of botany as many drugs were plant based. Charles’s death in 1778, while still a medical student at Edinburgh University, meant that the book reverted to his father, just when Erasmus Darwin was developing an intense interest in botany. 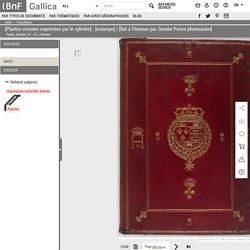 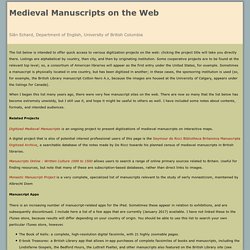 ALO: Austrian Literature Online: Die digitale Bibliothek : complete digitizations of Austrian documents from the 11th C to the present. The easiest way to find the medieval and Renaissance manuscripts is via the Year Index. In German and English. Vienna Österreichische Nationalbibliothek The Digital Reading Room is a portal to various digitised holdings, including Manuscripts . Brussels. Middle Ages and Renaissance. 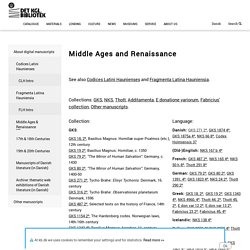 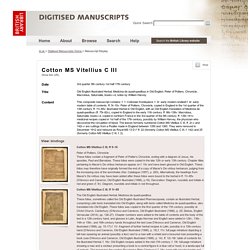 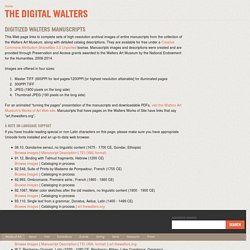 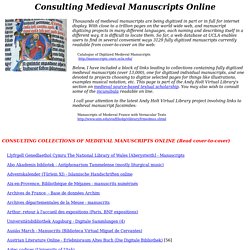 The first two phases of the Greek Manuscripts Digitisation Project were generously funded by the Stavros Niarchos Foundation and the third phase was funded by the Stavros Niarchos Foundation, the A. G. Bodleian Library: Department of Special Collections and Western Manuscripts: Western manuscripts. The Online Catalogues of Archives and Manuscripts represent only a part of the manuscript holdings in the Bodleian Library. Here you will find descriptions of archives and manuscripts which have been catalogued after 2001; some retrospective digital conversions of earlier unpublished catalogues; and collection-level descriptions of most of the collections catalogued in our published hardcopy catalogues. Visit the Special Collections LibGuides for further information, including details of other relevant finding aids. Digital Special Collections - Leiden University Library. On display this week: Leabhar Mór Leacain / The Book of Lecan C14-C15 Irish #manuscript written at Lecan (Castleforbes), Co. Sligo.