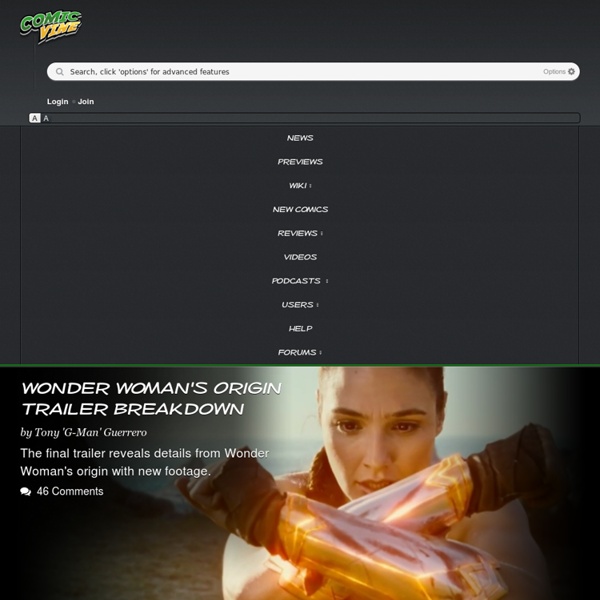 Roof finished… « littleyellowdoor Little Yellow is roofed! What a thought :) My dad has been trying to work out a way of getting to the ridge without my having to clamber up there, but in the end I convinced him on the practicality of being able to access both sides, and to the roof I went. Comicgate - Comicmagazin mit Rezensionen, Interviews, Webcomics und vielem mehr von Frauke Pfeiffer Mittwoch, 27. August 2008 Even though Comicgate is a Germany-based online magazine, every now and then we are publishing English content in addition to its German equivalent; e.g. some interviews have to be held in English anyway and are translated into German afterwards. Batman: The Animated mini-series 3: Into Colour! - Hero Collector In the last feature, we looked at the development of the new six-piece set of Batman: The Animated Series Figurines, finding reference and refining the sculpt of each model. This week, we're sharing the final touches: painting the set, packaging and the magazine. After going back and forth with the sculpting team and getting final approvals from DC, we finally ended up with some sculpts we all really liked. With sculpts done, the next step was the paint.

Cursed Pirate Girl: "Our Generation's Alice in Wonderland" Jeremy Bastian comic book by Thomas Negovan The response has been TRULY heartwarming! We hit our "low" goal in only two days! Our "secret goal" was 500 supporters, dared we hope? We had sixty supporters in the first two days- if we can keep getting about 20 a day, we WILL hit 500! So... (1) Please email around the link, let people know about the book- and make sure they follow up with a pledge!

The Super Dictionary One of the parts of his hand? Not even, “one of the long parts of his hand”? I mean, for all I know, you could be talking about Green Lantern’s knuckles! Or his fingernails. Lucky for you, Super Dictionary, that we know what you meant. And yeah, I guess Hal wears one ring. Before & After: "Audree" Gets a Makeover The Fancy Farmgirl Audree was always pretty. She definitely has good bones, but over time Audree's looks had, well, faded a bit. It happens. Life on the road takes a toll on a girl.

Michał Dziekan Illustrator and character designer Michal Dziekan was born and raised in small town in south-western Poland. He moved to city Wroclaw where he attended Architecture on University of Technology. After three years he left school and moved to Warsaw to work in post production studio Platige Image as a concept artist and matte painter. He stayed in Platige Image from 2007 to 2011, where working on animated commercials and films he got opportunity to gain experience in such fields as vfx compositing, motion graphics animation, animation direction and directing. Interview: Swifty Lang on Comic Books, Archaia, Immigration and Werewolves Jonathan “Swifty” Lang was born in Liege, Belgium. (For my American readers, Belgium is a country in Europe.) Lang was raised in South Florida; specifically in the areas of Hollywood and Kendall.

Comic Books for Grown-Ups: 10 Masterpieces of Graphic Nonfiction by Kirstin Butler Seeing the world in six-panel strips, or what Allen Ginsberg has to do with the wonders of zygotes. Who doesn’t love comic books? While infographics may be trendy today (and photography perennially sexy), there’s just something special about the work of the human hand. Good old-fashioned manual labor, literally, brings a unique richness to storytelling where words alone sometimes fall flat. We’ve put together a list of some of our favorite graphic non-fiction, excluding Maus-style memoirs — perhaps another time — since narrowing down to ten picks was tough enough.

Homemade "Vicks Vapor shower disks" Have you seen the commercials for the Vicks Vapor shower disk thingies? You put one of these disks in your shower, and voila thanks to the vapors in it, you're magically healed, your cold is gone, and your face is shockingly free of snot. I always used to watch the "Noxema girl" splashing water on her face and wondered how she was able to wash her face without being completely overrun with boogers. I'm the only one? Yes? Ok, moving along then...