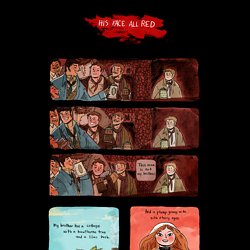 Crossed (comics) Crossed is a comic book written by Garth Ennis and drawn by Jacen Burrows for the first ten issues, and published by Avatar Press. 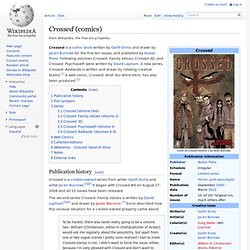 Following volumes Crossed: Family Values, Crossed 3D, and Crossed: Psychopath were written by David Lapham. A new series, Crossed: Badlands is written and drawn by rotating creative teams.[1] A web comic, Crossed: Wish You Were Here, has also been produced.[2] Crossed is a creator-owned series from writer Garth Ennis and artist Jacen Burrows.[3][4] It began with Crossed #0 on August 27, 2008 and all 10 issues have been released. The second series Crossed: Family Values is written by David Lapham[5][6] and drawn by Javier Barreno.[7] Ennis described how this unusual situation for a creator-owned property came about: All Crossed stories agree that the infection was stunningly rapid, so fast that the news media and most world governments had little if any time to respond, but the exact specifics of the outbreak differs from writer to writer. 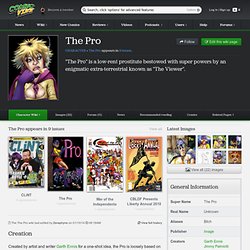 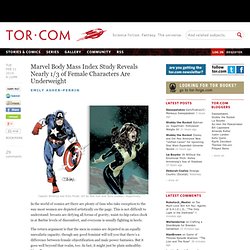 Art by Bob Hall and Terry Dodson, respectively. In the world of comics art there are plenty of fans who take exception to the way most women are depicted artistically on the page. This is not difficult to understand: breasts are defying all forms of gravity, waist-to-hip ratios clock in at Barbie levels of discomfort, and everyone is usually fighting in heels. The return argument is that the men in comics are depicted in an equally unrealistic capacity, though any good feminist will tell you that there’s a difference between female objectification and male power fantasies. A study done by two university students took a set of random selected Marvel comics characters, equal numbers male and female, and put them to a BMI test. All female characters in the sampling were either under a healthy BMI or incredibly low on the healthy spectrum. Rat Queens #1. Has DC Comics Done Something Stupid Today? Ka-Pow! Marvel Opens Massive Comic Book Images Archive And API To Fans, Developers. 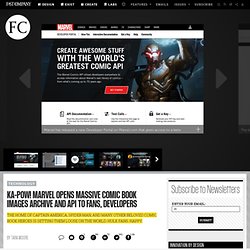 We're about to find out. Marvel Comics is unveiling its programming interface (API) and developer platform in a beta version tomorrow morning, swinging wide the gates to the Marvel universe of comic heroes to fans and developers around the world. The API--which will include comic book artwork, character histories, creator insights, and expanded stories--will grant members access to an expansive database of Marvel's library of 75 years of comics, including over 30,000 comics, 7,000 series, and 5,000 creators. This move gives developers the tools to create their own Marvel-based apps and digital offerings. The brainchild of Marvel’s VP of web and application development, Peter Olson, the new API and Developer program provides a robust portal for developers.

"We expose a lot of different types of data with the API," Olson told Fast Company. Meet the Blue Ear. By Tim Stevens Like so many of us, Anthony Smith just wants to be like his favorite super heroes. 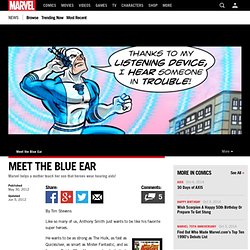 He wants to be as strong as The Hulk, as fast as Quicksilver, as smart as Mister Fantastic, and as funny as Spider-Man. However, when he looked up to his favorites, he saw that none of them seemed to be like him in one key way: none of them wore a hearing aid. So, despite the device—which he and his family call the “blue ear”—giving him the ability to hear the world around him, he rejected it. His mother, Christina D'Allesandro, frustrated by the development and at a loss of how to convince her son that heroes could wear hearing aids, reached out to Marvel in the hopes that some character or image could show her son he need not sacrifice his hearing to be one of the good guys. “Christina sent her heartfelt letter in to the general catch-all ‘fan mail’ account which is shared by the Heroes group in editorial,” Editor Bill Rosemann recalls. 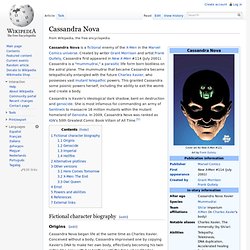 Conceived without a body, Cassandra improvised one by copying Xavier's DNA to make her own body, effectively becoming his twin sister. She grew with her brother until the time when Charles sensed her monstrous thoughts. Charles attempted to kill the creature, resulting in its physical body being stillborn.