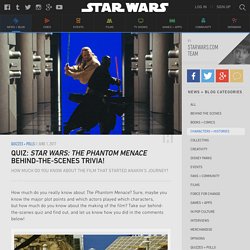 Sure, maybe you know the major plot points and which actors played which characters, but how much do you know about the making of the film? Take our behind-the-scenes quiz and find out, and let us know how you did in the comments below! He could get any actors he wanted CG technology was more advanced He could remember several lightsaber moves He could make the crew laugh He could remember other actors’ lines He could stay cool in Tunisia Pernilla August - Shmi Skywalker Oliver Ford Davies - Sio Bibble Terence Stamp - Chancellor Valorum Brian Blessed - Boss Nass A Warriors basketball game You got {%result value%} out of 10 correct! The ability to get a question right does not make you intelligent. Ready to try a different quiz? Share on Facebook Share on Twitter Remember, your focus determines your reality. Are you an angel? Chancellor Palpatine will watch your trivia career with great interest. 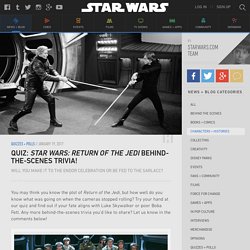 Try your hand at our quiz and find out if your fate aligns with Luke Skywalker or poor Boba Fett. Any more behind-the-scenes trivia you’d like to share? Let us know in the comments below! Michael Carter (Bib Fortuna) You got {%result value%} out of 10 correct! To put it simply, Jabba thinks your skills are bantha fodder. Ready to try a different quiz? Share on Facebook Share on Twitter Your feeble skills are no match for this behind-the-scenes trivia quiz. You cannot escape your destiny. No more training do you require. Now that you’ve mastered this quiz, test your luck with behind-the-scenes trivia from The Empire Strikes Back! StarWars.com. TAGS: BTS Trivia, quiz, Star Wars Episode VI: Return of the Jedi (1983) Brain Candy. Brain Candy. Wonder Woman's a Feminist Icon Now—Despite the Comic Books. Twenty-three years. 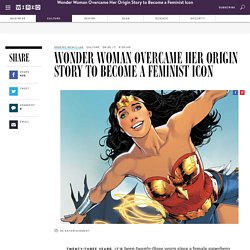 It’s been twenty-three years since a female superhero has anchored her own movie—1994’s Supergirl being the most recent example. (Catwoman and Elektra? Both antiheroes. Don’t @ me.) And as comic books’ first female hero, Wonder Woman was long overdue for her full-length feature adaptation, which dominated theaters this weekend. Wonder Woman’s first appearance, 1941’s All-Star Comics #8, recounts why she came to America in the first place. And win she does, which leads to Diana’s adoption of her heroic moniker. It gets weirder, though. The bedrock of Wonder Woman’s character didn’t change, in fact, until George Perez rebooted her mythos in 1986. Still, even this rewritten version of events doesn’t let Diana stand on her own two boots. That’s when the “Year One” storyline began in the current Wonder Woman comic book. Does she win the contest? Go Back to Top. Wired. Culture - The ultimate in Italian cool. As the aging Casanova in La Nuit de Varennes (1982), Marcello Mastroianni politely turns down a young woman’s offer to be his 1000th sexual conquest. 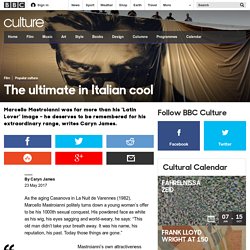 His powdered face as white as his wig, his eyes sagging and world-weary, he says: “This old man didn’t take your breath away. It was his name, his reputation, his past. Today those things are gone.” I don’t think people realise what an intense actor he was – Florence Almozini Mastroianni’s own attractiveness persisted to the end of his life. Rescuing him from that stereotype is one of the aims of a large Mastroianni retrospective in New York, a collaboration between the Film Society of Lincoln Center and Istituto Luce Cinecittà, which provided many film prints.

The series is called Il Bello Marcello, or Handsome Marcello. His macho characters are often outwitted by the women he is trying to use. The series’ 28 films feature an astonishing range of master directors, including Luchino Visconti and Michelangelo Antonioni. Every DC Comics Movie, Ranked From Worst to Best.