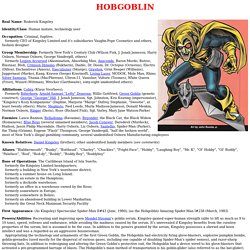 I know this. I know how hard they are to write, to make, and to put out into the world. I know how hard it is to do all of it right. And with big summer blockbusters, it's almost impossible even. And every single thing that ends up working in a film, from the dawn of its inception to the laugh or cheer on a movie screen, is a miracle of its own right. But I have to talk about the problem instead. The problem, and this is always the problem for the recent MCU, is that movies have to rely on dramatic catharsis to tell us what they're really about. They're not actually about what they say they're about. Abandoned Comics Storylines. 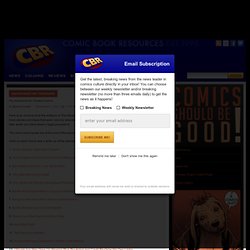 Comic Book Cartography. Daredevil, Torture, and the Importance of Context. *This article contains some spoilers for the Netflix series Daredevil* Daredevil premiered on Netflix last weekend to widespread acclaim from viewers and critics alike. 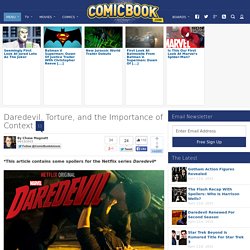 The show currently boasts an impressive ratings of 97% on Rotten Tomatoes and 75 on MetaCritic; it’s movie predecessor in 2003 only scored 45% and 42. It's not surprising, as there is a lot to enjoy in Daredevil. It boasts impressive performances, well-written characters and plot, purposeful and moody cinematography, and some of the best choreographed and shot action sequences of the past ten years. Honestly, there’s so much to like here (especially compared to Marvel Studio’s dismal previous pilot for Agents of S.H.I.E.L.D.) that many people, myself included, may instinctively forgive any flaws. Daredevil uses physical force throughout the entire series in order to coerce information from criminals. Essential Marvel. DC Comics has a similar range of black-and-white reprint paperbacks, Showcase Presents. 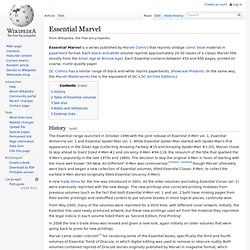 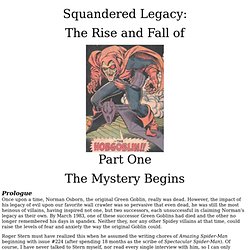 However, the impact of his legacy of evil upon our favorite wall crawler was so pervasive that even dead, he was still the most heinous of villains, having inspired not one, but two successors, each unsuccessful in claiming Norman's legacy as their own. By March 1983, one of these successor Green Goblins had died and the other no longer remembered his days in spandex. Neither they, nor any other Spidey villains at that time, could raise the levels of fear and anxiety the way the original Goblin could. Roger Stern must have realized this when he assumed the writing chores of Amazing Spider-Man beginning with issue #224 (after spending 18 months as the scribe of Spectacular Spider-Man). Still, Stern needed a Goblin - but it was apparent that it had to be an all-new Goblin.

This series of articles will examine the HobGoblin Legacy from the beginning to what currently seems to be its end. Early Kingsley. Jim Shooter's Blog. Jim Shooter–A Second Opinion, Part One: The Best Job He Can. [Jim Shooter] does the best job he can, takes great pride in his work, and is genuinely dedicated to publishing the highest-quality Marvel Comics ever. 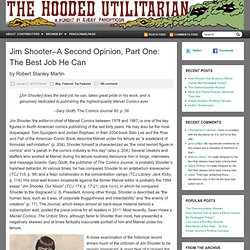 –Gary Groth, The Comics Journal 60, p. 56 Jim Shooter, the editor-in-chief of Marvel Comics between 1978 and 1987, is one of the key figures in North American comics publishing of the last forty years. He may also be the most disparaged. Tom Spurgeon and Jordan Raphael, in their 2004 book Stan Lee and the Rise and Fall of the American Comic Book, describe Marvel under his tenure as “a wasteland of formulaic self-imitation” (p. 204). Shooter himself is characterized as “the most reviled figure in comics” and “a pariah in the comics industry to this day” (also p. 204). A close examination of the historical record shows much of the criticism of Jim Shooter to be grossly misplaced. Jim Shooter had been working off and on in comics for several years when he became Marvel’s editor-in-chief in January 1978. The Secret History Of The Marvel Ultimate Setting. A reboot is a delicate thing. 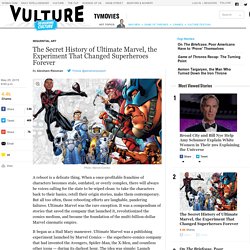 When a once-profitable franchise of characters becomes stale, outdated, or overly complex, there will always be voices calling for the slate to be wiped clean: to take the characters back to their basics, retell their origin stories, make them contemporary. But all too often, those rebooting efforts are laughable, pandering failures. Ultimate Marvel was the rare exception. It was a compendium of stories that saved the company that launched it, revolutionized the comics medium, and became the foundation of the multi-billion-dollar Marvel cinematic empire.

It began as a Hail Mary maneuver. There were many reasons the initiative could have failed, but it instead succeeded beyond its creators' wildest dreams. What happened? Squadron Supreme (Supreme Power) Although successful, Hyperion is outraged by the government exploitation and leaves, warning that he has no wish to be contacted by humankind again. 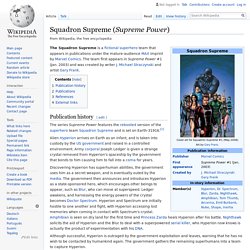 The government gathers the remaining superhumans into a team to capture Hyperion. A series of misunderstandings ensues, and after a series of battles between the Squadron, Ultimate Fantastic Four, Ultimates and the Earth-712 Squadron Supreme (whose world was also affected by the organism), the third culprit is revealed as Burbank, who was asked by the government to develop a weapon to kill Hyperion. Nick Fury is detained in custody in the Earth-31916 universe, while Squadron member Power Princess remains in the Ultimate universe to ensure that Doom (who escaped custody by using a Doombot) is captured.