AFTRS Media Lab – Free media arts resources for schools. Scratch! Media Cartoon Archive - Australian Politics and Society - 2013. History of Animation Part 1. About this Collection - Origins of American Animation. Illustration + Animation Art Gallery / Est. 1984 / SoHo, NYC. Animation History, Winsor McCay, Max Fleischer. The History of Animation: Advantages and Disadvantages of the Studio System in the Production of an Art Form (by Michael Crandol) "Animation should be an art....what you fellows have done with it is making it into a trade....not an art, but a trade....bad luck . 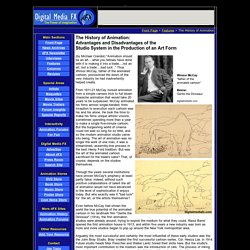 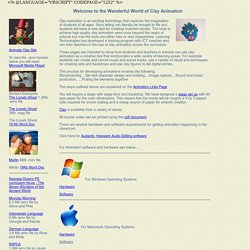 The News, Business, Technology, and Art of Animation. Animation. Method of creating moving pictures The bouncing ball animation (below) consists of these six frames. 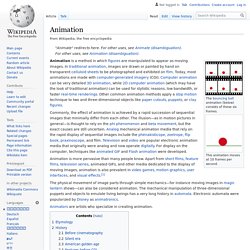 This animation moves at 10 frames per second. Animation is a method in which figures are manipulated to appear as moving images. In traditional animation, images are drawn or painted by hand on transparent celluloid sheets to be photographed and exhibited on film. Today, most animations are made with computer-generated imagery (CGI). Commonly, the effect of animation is achieved by a rapid succession of sequential images that minimally differ from each other. 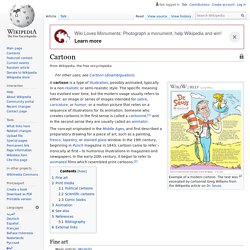 The text was excerpted by cartoonist Greg Williams from the Wikipedia article on Dr. Seuss. Fine art A cartoon (from Italian: cartone and Dutch: karton—words describing strong, heavy paper or pasteboard) is a full-size drawing made on sturdy paper as a study or modello for a painting, stained glass, or tapestry. Such cartoons often have pinpricks along the outlines of the design so that a bag of soot patted or "pounced" over a cartoon, held against the wall, would leave black dots on the plaster ("pouncing"). Print media Cartoons can be divided into gag cartoons, which include editorial cartoons, and comic strips. Political cartoons Political cartoons are like illustrated editorial that serve visual commentaries on political events.

Comic Books Are Still Made By Men, For Men And About Men. To say the comic book industry has a slight gender skew is like saying Superman is kind of strong. 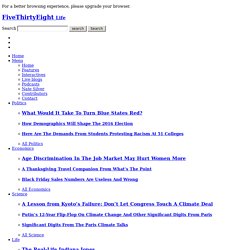 Comic books — much like the film industry they now fuel — vastly under-represent women. The people who write comic books, particularly for major publishers, are overwhelmingly men. The artists who draw them are, too. The characters within them are also disproportionately men, as are the new characters introduced each year. The big two comic publishers, DC Comics and Marvel, have taken note of this disparity and are trying to diversify their offerings. But these recent advancements don’t make up for the fact that women have been ignored in comic books for decades. Among comic-creators, the numbers are even more discouraging.

Part of this strong skew towards male comic book characters — and male writers — may be due to whom publishers have perceived their audience to be. And yet, comic book convention attendance breaks close to even between genders, Aaron said. Comics. Creative work in which pictures and text convey information such as narratives The history of comics has followed different paths in different cultures. 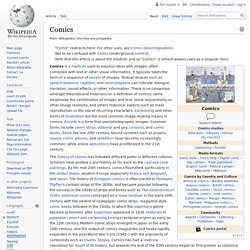 Scholars have posited a pre-history as far back as the Lascaux cave paintings. By the mid-20th century, comics flourished, particularly in the United States, western Europe (especially France and Belgium), and Japan. The history of European comics is often traced to Rodolphe Töpffer's cartoon strips of the 1830s, and became popular following the success in the 1930s of strips and books such as The Adventures of Tintin. American comics emerged as a mass medium in the early 20th century with the advent of newspaper comic strips; magazine-style comic books followed in the 1930s, in which the superhero genre became prominent after Superman appeared in 1938. 10 Ways to Create Comics Online. Creating cartoons and comic strips can be a good way to get reluctant writers writing. 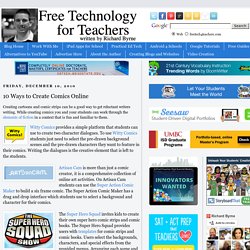 While creating comics you and your students can work through the elements of fiction in a context that is fun and familiar to them. Witty Comics provides a simple platform that students can use to create two character dialogues. To use Witty Comics students just need to select the pre-drawn background scenes and the pre-drawn characters they want to feature in their comics.