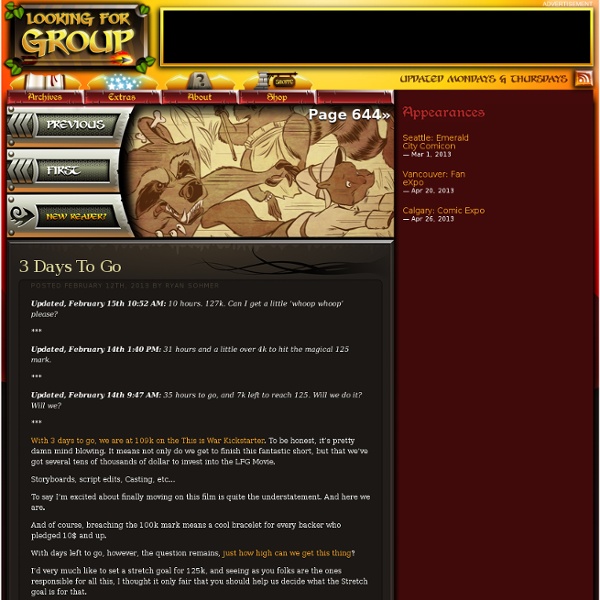 Some Web-like Changes We’ve made a few changes to the site over the last couple of weeks, and rather just wait until you haphazardly come across them, I thought I’d point out a couple I wanted to highlight. Thusly- Comments The rumors are true. On every LFG and NPC page, starting from the very beginning, you can now comment.

Least I Could Do: the Comic » by Ryan Sohmer and Lar deSouza Nuklear Power Girls With Slingshots Zero Punctuation Zero Punctuation is The Escapist's groundbreaking video review series starring Ben "Yahtzee" Croshaw. Every Wednesday Zero Punctuation picks apart the games so you don't have to. Called "hilariously cutting ... first legitimate breakout hit from the gaming community in recent memory" by Boing Boing, see why gamers love it and developers fear it. South Park: The Stick of Truth - Yes, There Really Were Crying Koalas Lucid dreaming academy PvPonline Penny Arcade Village Integration Today we got back from the villages. Our schedule is going to be Tuesday through Saturday in the villages and then Sunday and Monday we'll be in Livingston. I will say, the last five days have been really good.