Sinfest: The Webcomic To End all Webcomics 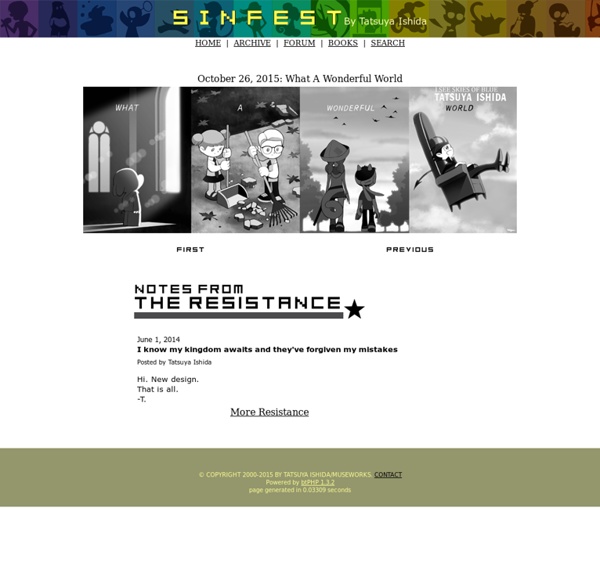 UserFriendly.Org Girls With Slingshots Caf-Fiends August 9th, 2012 Comic So yeah, been busy. Lackadaisy Expressions Boy, I didn't know what I was getting myself into when I started this. I've had requests for some sort of expressions tutorial dating back a while now, so I figured, "Sure! I can explain expression drawing...and it'll be way better than all those tutorials out there that are nothing but charts of generic expressions. Yeah! SUBNORMALITY! All content copyright Winston Rowntree, 2015. Museum previously seen here and then here. QC: New Comics Every Monday Through Friday 326 – Dogs and Cats Tuesday, April 19 – 12:00 AM Today’s comic is a bit more universal than usual, I think. I’ll admit it, I’m a dog person…but cat-owner Sarah really liked this one, so I think fans of felines won’t mind. After all, the cat is the funnier one in the comic. Apparently Nintendo agreed with the sentiment of this strip as well, since (as I’ve very recently learned) you can’t really do much at all with the kittens in Nintendogs + Cats.

Webcomics My first webcomic launched with this site in 1998. From 1998 to 2004, I regularly posted new comics in various experimental formats, occasionally getting into long online debates about whether this-or-that format was a step toward the future of comics or just a gimmicky dead-end. Most of the comics in this section play with the idea of treating the screen as a window rather than a page (the so-called "infinite canvas" style, most often associated with my book Reinventing Comics). For the most part, that meant big, clunky html tables for users to scroll through, but a few of the later comics like The Right Number test-drove alternate methods like plug-ins which weren't available when the site launched in '98. From 2004 on, I took a break from webcomics to create a couple of books and go on the road with my family for a year, but I hope to create new content again soon, starting with the conclusion of The Right Number and at least one more Morning Improv. --Scott February 2009

Wayward Sons: Legends - Sci-Fi Full Page Webcomic - Updates Daily New Adventures WithOccasional Updates Written, Lettered & Createdby Benny R. PowellPencil Artwork by Weilin YangFinishes by Youjun YangColors by Kun Song I feel so awesome To wet your appetite with the bonus story found in our new EC book, here's a sample page of the 8 page print-exclusive bonus story. We're pretty happy with the story, so we hope you'll like it! Also, the crossover between Magick Chicks and Eerie Cuties is in full swing. Be sure to visit both sites for twice the fun! Annnnd, if you're an artist/creator who'd be interested in contributing a guest comic for either Eerie Cuties or Magick Chicks, we're looking for comics or illustrations that we could run during the Xmas & New Year holidays. Email me if you're interested!

See other webcomics under my pearltree "entertainement short term", if you like by bloodmandarin Jun 19