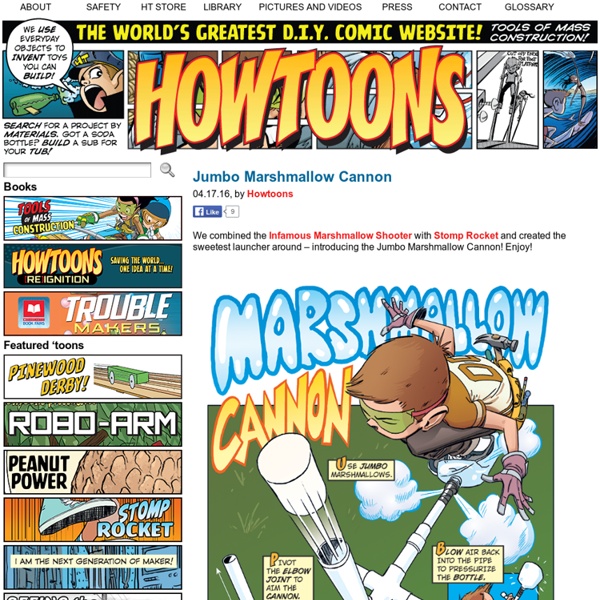 Turn your room into a pinhole camera with our latest Howtoon, Camera Obscura! We are excited to announce our new book Howtoons (Re)Ignition published through Image Comics due out Summer 2014. For this book we have assembled an all star creative team; writer Fred Van Lente, artist Tom Fowler, colorist Jordie Bellaire, letterer Rus Wooton. Writer, Fred Van Lente, describes (Re)Ignition “Tuck and Celine’s parents anticipate a coming ecological apocalypse and put their family to sleep deep underground with the hopes of riding it out. At some unspecified point in the future they wake up when their bunker runs out of power — and their parents have mysteriously disappeared. So these two kids have to embark on a quest through the brave and dangerous new world they find to be reunited with their mom and dad — and they have to use the gadgeteering and project-making skills to survive and battle the many strange things and people they encounter.”

Classroom Guide We want to help you bring DIY to your classroom. DIY is a platform for students to discover Skills and share what they make and do with a global community. Educators everywhere are using DIY to explore skill-based learning and introduce collaboration into their classroom – during homeroom, Genius Hour, after school, and even regular classes. Blend the DIY Skills platform into your core curriculum, or let your students explore new subjects while practicing skills. Register If you're already using DIY in your classroom, or want help getting started, please register below to let us know.

The Featured Creature Habitat: common in deep, temperate and equatorial oceanic waters Status: Not Listed Looking at the drawing above, you’re probably thinking it’s from some Hitchhiker’s Guide to the… Read Article → Join me on my hunt for a Spanish Shawl nudibranch! Answers Grockit Answers is just-in-time Q&A for video lectures. In Grockit Answers, interactions happen around video lectures, and participants ask and answer questions about specific points in the lecture. Since every question is attached to a specific point in time in the video, Grockit Answers displays a question and its answers at the point in the lecture that they are most relevant. And since the things that confuse you are likely to be the same things that confuse others, you'll find that answers to your own questions pop up on the screen just as you're starting to get confused.

Cambodian Spirits Projected on Trees Awaken the Night Cambodian Trees is a creative light projection project by French artist Clément Briend that overlays trees with sculptural images of spirits and deities that are highly regarded in Cambodian culture. It's a beautiful surprise when the projected spirits awaken and reveal themselves at night as though they are made of the towering trees themselves. The photographic light installations echo the spirituality of the few sprouts of nature in the predominantly urban landscapes. It is a visual imagining of the divine figures that inhabit the world, as seen through an environmentally aware spiritual eye. Clément Briend website via [iGNANT]

Maker Space In Education Series… 20 Reasons Your Students Should Be Making It’s still summer time in the States and I couldn’t help but think of the idea of play, and that of course made me think of Maker Space. I have long encourage Making in the classroom. It wasn’t until recently that I discovered that this idea is now a movement and one that I suggest all 21st century educators Make some room for. I hope you enjoy this series and I encourage you to send me information and resources, as I am also Making time to learn. First, to ensure you do not miss one of these valuable posts or other resources covering PBL, Digital Curriculum, Web 2.0, STEM, 21st century learning, and technology integration please sign up for 21centuryedtech by email or RSS.

DESIGN SQUAD NATION . Build Did you know? A Bristle Bot is a lot like a Pogo Stick. For example, you bounce up and down on a Pogo Stick. The pager motor does the same thing with the toothbrush head—it bounces it up and down. To move forward on a Pogo Stick, you tilt it forward while bouncing. Memento Mori: the beautiful ways we have kept the dead among the living Koudounaris is a skilled photographer, as the 500+ pictures in this oversized book attest, but even more so, he's a skilled and sensitive historian, who brings an anthropologist's empathy to the task of documenting and framing the varied practices depicted in the book. The book opens with a highly readable, beautiful essay on the many ways that humanity has sought to maintain contact with their dead through preserved, displayed remains, and the political, moral and spiritual uses to which the dead have been put. After this introduction, Koudounaris uses text sparingly and well, briskly presenting the facts and context for each of the image-sets in the book. He is every bit as scrupulously compassionate and respectful of the gilded mummies of Buddhist monks as he is in describing the Italian Capuchin monks who were mummified in great 17th century charnels.