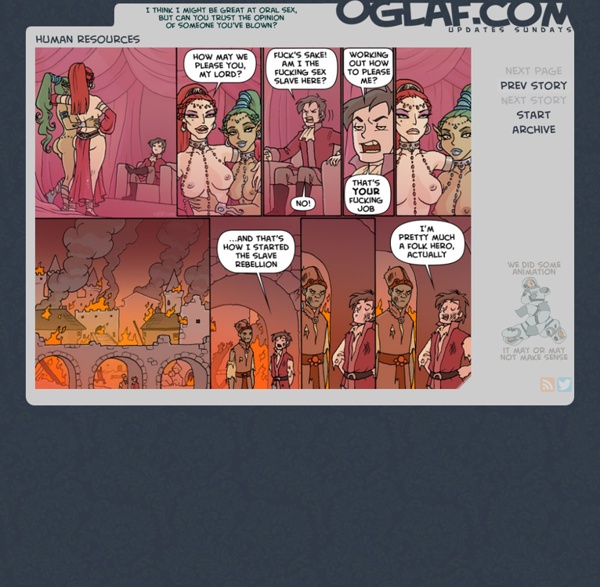 TopatoCo We Are Become Pals is a new book by Joey Comeau and Jess Fink. It’s the story of two awesome teenage girls, Jane and Helen, and their friendship and exploits. Much of it was published on Tumblr, and is now printed in this handsome hardcover edition. There are new epilogue chapters, as well as two new “Reading Corner” chapters. We recently asked Joey and Jess a few questions about the book, their friendship, and what makes teenagers so fun to write. TopatoCo: How did you two come to work together on this project?

Tripping Over You » glad you came updates mondays and thursdays There are currently no widgets assigned to the left-sidebar, place some! Once you add widgets to this sidebar, this default information will go away. Widgets can be added by going to your dashboard (wp-admin) -> Appearance -> Widgets, drag a widget you want to see into one of the appropriate sidebars. Questionable Content: New comics every Monday through Friday Hate Song Fart is a word in the English language most commonly used in reference to flatulence. The word "fart" is generally considered unsuitable in formal situations as it may be considered vulgar or offensive. Fart can be used as a noun or a verb.[1] The immediate roots are in the Middle English words ferten, feortan or farten, kin of the Old High German word ferzan. Cognates are found in old Norse, Slavic and also Greek and Sanskrit. The word "fart" has been incorporated into the colloquial and technical speech of a number of occupations, including computing. Etymology

Cats N' Cameras - Just when you thought it was safe to go to the photographer **Note to our Cameo guests, this strip was a bonus and does NOT count towards your cameo appearances** Hey Readers, Can’t help but thank you all enough for the fundraiser support as well as the cameo interest, thanks to all of you helping out I was able to order in Mackey’s new tablet a little in advance of the fundraiser completing it’s goals. So this weeks comic is brought to you in FULL COLOR !! Yay.. So now on to the comic, we’re meeting most of the on going chapter cast in this one, though we’re still missing a few who weren’t paid by the time the strip was drawn out, As well as miscellaneous background people you’ll see as the story moves forward. PHD Comics Coming Soon - Stay tuned for a BIG announcement about an awesome project Jorge is working on! PHD Store - Our store was down for a while, but now it is back! Free excerpt from The PHD Movie 2! - Watch this free clip from the movie that Nature called "Astute, funny"!

Berserk Manga - Read Berserk Summary Guts, known as the Black Swordsman, seeks sanctuary from the demonic forces attracted to him and his woman because of a demonic mark on their necks, and also vengeance against the man who branded him as an unholy sacrifice. Aided only by his titanic strength gained from a harsh childhood lived with mercenaries, a gigantic sword, and an iron prosthetic left hand, Guts must struggle against his bleak destiny, all the while fighting with a rage that might strip him of his humanity. The series 'Berserk' has been categorized as 'mature', therefore may contain intense violence, blood/gore, sexual content and/or strong language that may not be appropriate for underage viewers. Volume: Berserk Big Head Press - Thoughtful Stories, Graphic Novels Online And In Print - Escape From Terra - by Sandy Sandfort, Scott Bieser, and Lee Oaks Strip 994 - Click on page above to goto the next page. -- First Seen: 2012-07-07 Escape From Terra is updated with new pages every Monday through Friday. BHP At Porcfest XI! Come see Scott and Frank at PorcFest XI this summer! We'll be running with the free-staters of New Hampshire selling books and talking up your favorite online web comic, Quantum Vibe.

Artifice - Title Page - Yaoi 911 Webcomics Artifice is a sci-fi comic written and published by me, Alex Woolfson. All the art is by the awesome and brilliant Winona Nelson. I hope you enjoy it! Some navigation tips: At the bottom of each comic, there is a navigation menu giving you the choice to go to the First, Previous, Next and Last pages.

The Young Protectors “Engaging The Enemy” is a multi-chapter arc in the superhero comic The Young Protectors written and published by me, Alex Woolfson. Pencils are by Adam DeKraker and colors are by Veronica Gandini. I very much hope you enjoy it! Some navigation tips: BEST FRIENDS FOREVER updates BFF updates in chunks (10-15 pages) whenever I finish the pages. I announce it on Twitter, Tumblr, and Facebook when I do! You can also subscribe to get email updates when there's new content for BFF. comic