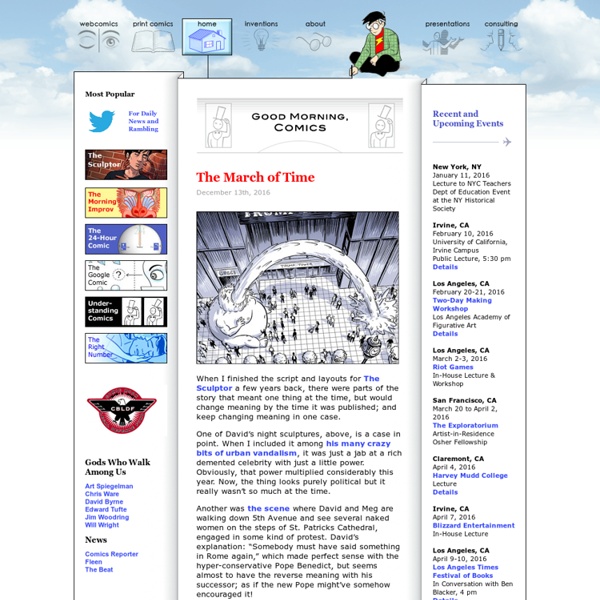 Still toiling away at the graphic novel, so this blog will remain quiet a few months longer, but I do have a tight cluster of trips coming up, so here’s a bit more info on each, starting with an important opportunity coming up next month. The Two Day Making Comics Workshop comes to Alberta! On March 21-23, I’ll be bringing the lecture and full 2-Day Workshop to the Galt Museum in Lethbridge, Alberta. SIGN-UP for one of the limited workshop seats, and get your advance tickets for the lecture starting on Feb 22. This is the first time the 2-day workshop has come to Canada, and this and the Los Angeles workshop (see last post) are the only ones currently planned for 2013, so don’t miss this chance to learn two full days worth of comics-making strategies and techniques. Out and About

Transmedia Storytelling (Fall 2010) The main characters in Doctor Who don't change every episode, but this isn't necessarily wrong. Just look at Star Trek for an example of a show that doesn't require character development to be good or engaging. While all of the Dr. Showcase of the Illustrative Work of Emily Rose Lambert A student of Loughborough University Emily Rose Lambert is an emerging Illustrator with all the quality of many established illustrators. Emily’s work often retains a hand crafted aesthetic and style whilst also taking advantage of the modern technologies and software through Photoshop. I’m a student at Loughborough University just about to start my third and final year studying BA (Hons) Illustration.

Steve Ditko all images on this web-site are © and ™ their respective owners. images are used for entertainment and reference purposes only. "i never talk about myself. my work is me. i do my best, and if i like it, i hope somebody else likes it, too." this site does not concern itself with steve ditko’s personal life, his politics, philosophy or the brand of toothpaste he uses. it is simply about his work, and the myriad places where that work has appeared over the span of his incredibly prolific career: from comic books, fanzines, magazines and books to toys, games, trading cards, video and more. images of these diverse and multitudinous items are viewable here, accompanied by text descriptions of publication data and ditko-specific content. the text for this site was created using the comic book lettering font WILDANDCRAZY and is best viewed that way.

scottmccloud.com - Understanding Comics 224 pages. Black and White with 8-page color section. A 215-page comic book about comics that explains the inner workings of the medium and examines many aspects of visual communication. Understanding Comics has been translated into 16 languages, excerpted in textbooks, and its ideas applied in other fields such as game design, animation, web development, and interface design. Craft Home Party! How-To: DIY Clock Balloons for New Year's Eve Recipe: Frozen Hot Chocolate Recipe: Transmedia Resources DRAFT - this is a no-profit site that is a continuous work in progress - short quotes from the collected resources are included, if you do not wish any of your resource quoted, let me know and I'll remove the quote docwho2100@gmail.com UPDATE - April 6, 2014 - It has been awhile - but I still am around, still have been collecting sources and still intend to continue plugging things in. Hope to start adding more again within the month - ahhh the life of an archivist!!! Transmedia is used in many different ways leading to the need to use the surrounding context to determine full meaning (in a way, the very definition of transmedia has a transmedial property to it ;) A very basic definition would be one of media delivered in multiple formats/platforms. transmedia intertextuality to define and discuss how narrative for children's projects moves across multiple sources and has levels of interaction.

10 great examples of doodle art Doodling is a great, fun way of expressing yourself. But it's often underrated as an art form. Yet doodle art can help you learn how to draw and make a great addition to your design portfolio – as highlighted by these brilliant examples. Combining child-like doodles with expressive illustrations, they show how doodling can be used to create beautiful and arresting designs. Who knew there were so many doodle art styles? The Unofficial Handbook of Marvel Comics Creators (Many thanks to Barry Pearl for re-writing this section with additional info that I did not have.) There was no rating of comics before the Comic Code Authority was installed in 1955. Starting then, all of Marvel's comics had to be approved by the CCA or they could not be distributed to dealers.

X-TRA Bruno Munari, Constellations of The Zodiac, 1975. Pierced silver discs. © Bruno Munari. Courtesy Corraini Edizioni. The egg has a perfect form even though it comes out of a butt. -Bruno Munari1 I never thought looking at a Xerox copy made in the 1970s of some string swirled around on a copier’s glass would lead to months of research, slide lectures, and inspiration for several projects, plus a class syllabus. Live from Transmedia Hollywood 2: Visual Culture and Design > SydneysBuzz Another entry by guest blogger, Meredith Levine. Meredith Levine is a second year MA student of Cinema and Media Studies in UCLA's School of Theater, Film, and Television. She has been working on the Transmedia Hollywood conference since its inaugural year in 2010. Transmedia is at its core, telling a story over multiple platforms. It is not new, but with the proliferation of new technology and ease of consuming media it is a trendy, if not, occasionally mis-used word.

Scott McCloud was a visiting speaker at Drexel last year and I've come to like his books, particularly "Understanding Comics". I've included his website here, though I admit much of the material is only related to Persepolis in the most tangential way. by tfristrom Apr 1