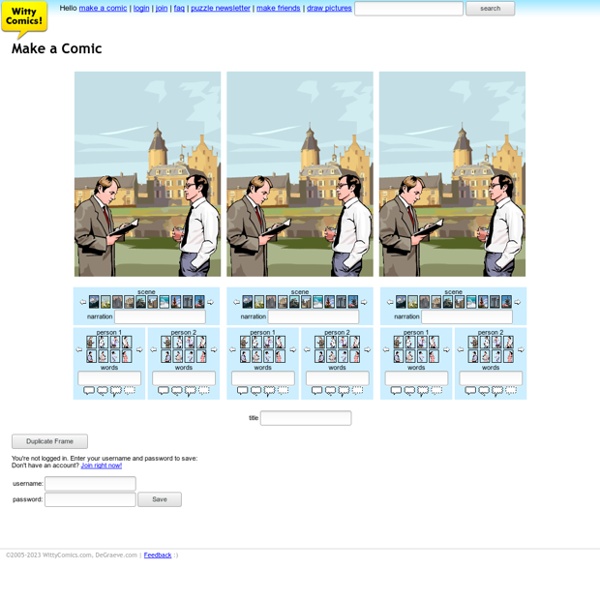 sans titre El viaje books by Marek Bennett: El viaje más caro (The Most Costly Journey): An ethnographic cartooning project that employs collaborative storytelling as a tool to mitigate loneliness, isolation, and despair among Latin American migrant farm workers on Vermont dairy farms. Project archive @ Vermont Folklife Center: EL VIAJE @ Facebook → Create a new strip You are using an ancient web browser, Stripgenerator does not work properly in it.Get rid of Internet Explorer 6! Upgrade to a new version or use another browser like Chrome, Opera, Safari or Firefox. StripGenerator Say hello to manoli_martin 384,910 Members 1,059,569 Strips Sign in Adobe Spark in the Classroom Adobe Spark is partnering with NASA. The 2019 NASA OPTIMUS PRIME Spinoff Promotion and Research Challenge (OPSPARC) is asking students to ignite their creativity and thinking using Adobe Spark. See more details below and learn how students can participate.

Top 25 Tech Tools for Teachers for 2015 Technology Evolves Quickly! When I started teaching in 2004, I used any/all available technology. I had an overhead projector and a CD player. Then I scored an InFocus machine and a laptop because no one else in the social studies department had use for it. Afterwards, I graduated to a SmartBoard and “hoarder of laptop carts.” Comic Creator The Comic Creator invites students to compose their own comic strips for a variety of contexts (prewriting, pre- and postreading activities, response to literature, and so on). The organizers focus on the key elements of comic strips by allowing students to choose backgrounds, characters, and props, as well as to compose related dialogue (shown at left). This versatile tool can be used by students from kindergarten through high school, for purposes ranging from learning to write dialogue to an in-depth study of a formerly neglected genre. The tool is easy to use, made even easier with the Comic Strip Planning Sheet, a printable PDF that comic creators can use to draft and revise their work before creating and printing their final comics. After completing their comic, students have the ability to print out and illustrate their final versions for feedback and assessment.

sans titre Every CBLDF supporter knows that comics are a great medium for expressing what matters. While so many Americans are making their voices heard in demonstrations around the United States, there are also many children and teens feeling a need to express their beliefs or share their experiences who aren’t in a position where it’s safe to leave their home. Thankfully, they can still make their voices heard by exercising their creativity, and mini-comics are a great way to do that! This resource is designed to help parents and educators support kids who want to speak up by using comics, with specific tips about writing, drawing, and sharing their work. Why Comics? Storyboard - App su Google Play Storyboard transforms your videos into comics. It selects, lays out, and stylizes video frames using experimental research technology from Google that runs entirely on your device. TO USE THE APP1. Load a video.2. Pull down to refresh till you get a layout you like.3.