Colorist on Color: The Introduction - Women Write About Comics. Introducing the first of hopefully many articles on color. 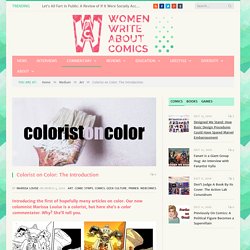 Our new columnist Marissa Louise is a colorist, but here she’s a color commentator. Why? She’ll tell you. Fig. 1: From this to that! What a change! I love black and white drawing. Colorist on Coloring: What Is a Flatter? - Women Write About Comics. Hey there, have you been wondering just what the heck a flatter does? 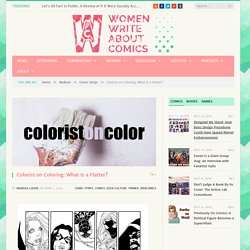 Well I am going to give you another long serious professional dissection of what a flatter does and why it is important. To further prove that I am a very boring person obsessed with minutia. [You’re very interesting actually — Ed.] A flatter is a technician. Outsourcing to professional flatters. In my last post I brought up Elance or Guru for outsourcing. 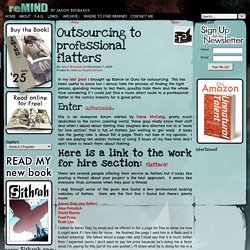 This has been useful to know but I almost hate the process of finding the right person, spending money to test them, possibly train them and the whole time wondering if I could just find a more direct route to a professional flatter in the comics industry for a good price. Enter GutterZombie. This is an awesome forum started by Dave McCaig, pretty much dedicated to the comic coloring world. These guys really know their stuff and when I asked about flatting they laughed and directed me to a “work for hire section” that is full of Flatters just waiting to get work. It looks like the going rate is about $10 a page. Here is a link to the work for hire section: Flatters! There are several people offering their service as flatters but it looks like posting a thread about your project is the best approach. I dug through some of the posts and found a few professional looking websites of flatters. Untitled. RELEASE is a a collaborative Cardcaptor Sakura fansize dedicated to celebrate the story of Sakura Kinomoto and her hunt for the Clow Cards. 55 artists have created 55 yet unseen illustrations por this project! 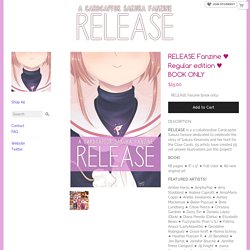 Creating a New Comics Canon. I was lucky enough to spend a week in Ontario last month, and between doing the normal tourist stuff – the ROM, Niagara Falls, the anti-capitalist worker-owned co-operative sex shop – I made sure to put aside time to visit The Beguiling. 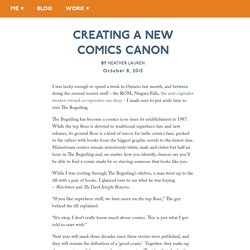 The Beguiling has become a comics icon since its establishment in 1987. While the top floor is devoted to traditional superhero fare and new releases, its ground floor is a kind of mecca for indie comics fans, packed to the rafters with books from the biggest graphic novels to the tiniest zine. Mainstream comics remain notoriously white, male and cishet but half an hour in The Beguiling and, no matter how you identify, chances are you’ll be able to find a comic made by or starring someone that looks like you. Why DC Needs to Move on From Alan Moore. Watchmen was published 30 years ago this year; Batman: The Killing Joke, 28 years ago. 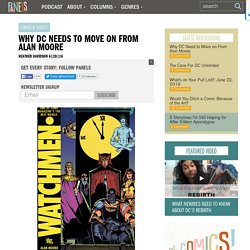 Despite being older than many comics readers, Alan Moore’s two most iconic works continue to loom large over the DC universe. 2016 has seen them cast a particularly heavy shadow, with DC’s Rebirth folding Watchmen and its characters into its mainstream canon, and a feature-length animated adaption of The Killing Joke set to be released in July. Moore may not have worked with the publisher since 1989, but the image DC wants to portray of itself clearly has his works front-and-centre. It’s not hard to see why. Even as the literary mainstream has become increasingly open to comics over the last decade or so, Watchmen remains at the forefront of the few books considered worthy of discussion; The Killing Joke, meanwhile, is held up as one of DC’s most definitive character’s most definitive stories.

DC seems unconcerned with this criticism. Jumping on the Lumberjanes Bandwagon - Black Girl Nerds. I’m going to be honest—I have no interest in anything that even remotely sounds like it could involve the outdoors, even if it’s in book form. 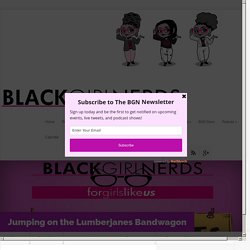 So, I borrowed Lumberjanes from my local library instead of purchasing it with my usual shipment from Barnes and Noble, and started with the lowest expectations ever. However, within a few pages, the book had me giggling out loud and by the time I finished, I was pleasantly surprised at how good it was. I give it a 9/10! As I approached the ending of the first volume, I found myself thinking, This feels like an Adventure Time for girls. If you’ve ever watched Adventure Time, the Lumberjanes’ hijinks feel similar in tone to the episodes where Fiona and Cake are the heroines; the main characters, Jo, April, Mal, Molly and Ripley, go on hilariously fantastic quests and get sidetracked by fleeing mythical beasts while in pursuit of some mystical object. PRO: The language is simply great. Operation Space Cat ·