Why the modern world is bad for your brain 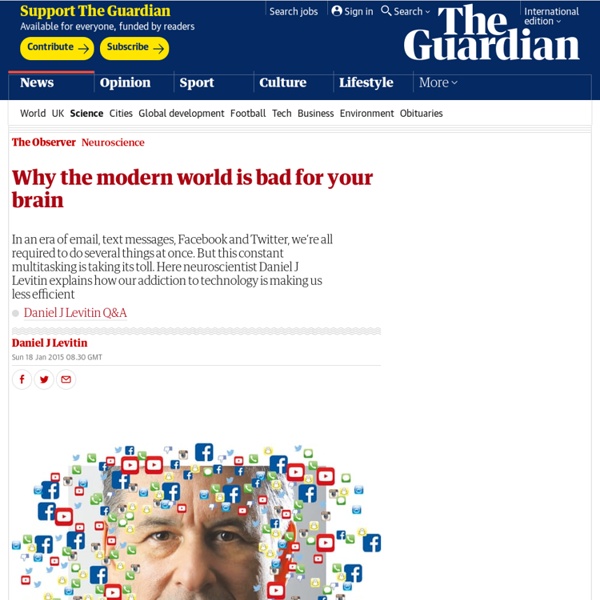 Our brains are busier than ever before. We’re assaulted with facts, pseudo facts, jibber-jabber, and rumour, all posing as information. Trying to figure out what you need to know and what you can ignore is exhausting. At the same time, we are all doing more. Thirty years ago, travel agents made our airline and rail reservations, salespeople helped us find what we were looking for in shops, and professional typists or secretaries helped busy people with their correspondence. Now we do most of those things ourselves. Our smartphones have become Swiss army knife–like appliances that include a dictionary, calculator, web browser, email, Game Boy, appointment calendar, voice recorder, guitar tuner, weather forecaster, GPS, texter, tweeter, Facebook updater, and flashlight. But there’s a fly in the ointment. In the old days, if the phone rang and we were busy, we either didn’t answer or we turned the ringer off. Then there are the metabolic costs that I wrote about earlier. © Daniel J.

What It Feels Like to Be an Octopus On a recent Sunday, at my local Italian market, I considered the octopus. To eat the tentacle would be, in a way, like eating a brain—the eight arms of an octopus contain two-thirds of its half billion neurons. Delicious for some, yes—but for others, a jumping off point for the philosophical question of other minds.

Qatar Foundation HeadquartersDoha - Inside Outside Qatar Foundation Headquarters Place: Doha, QatarClient: Qatar FoundationArchitects: OMAScope of work: Landscape designDate: 2008 - 2016Size: 34.000 sqm The idea for the garden is to consider it as a collection of habitats, planted with indigenous trees, shrubs, flowering plants and bulbs - tolerant of heat, salty wind and draught – that will react to a carefully measured gradational water system that is organized in north-south direction; thus providing a rich variety of gardens, from green and lush to sculptural and dry. Species from other countries of the same hardiness zone as Qatar will be mixed in strategically, to add form, shadow, scent and color effects. As the future garden is, in fact, a floating stone and steel plate above a parking lot of the same size, it does not offer full soil to its planting.

Infographic: Reading Can be Good for Your Health Reading might be typically associated with a sedentary lifestyle, but it's not all bad. Canada’s National Reading Campaign released an infographic last week which details how reading can lower your stress level and help you become a better person. It can't do much for one's weight or cholesterol, but for that I would recommend an audiobook and a good pair of shoes. What Happens After A Lack of Oxygen to the Brain? Not all brain injuries involve a blow to the head or lesion. Indeed, your brain can be injured even when nothing comes into contact with your head. Anoxic brain injuries occur when the brain is deprived of oxygen. The aftermath of a lack of oxygen to the brain is largely dependent on the extent of the oxygen deprivation. Some people recover with little to no consequences, while others need years of rehabilitative therapy.

Six ways your tech is spying on you – and how to turn it off So, your TV might be spying on you. It probably just wanted to join in with the rest of the technology in your life, because let’s face it: if you live in the 21st century you’re probably monitored by half a dozen companies from the moment you wake up to the moment you go to sleep. (And if you wear a sleep tracker, it doesn’t even stop then.) Compared with some of the technology that keeps a beady eye fixed on you, the news that Samsung’s privacy policy warns customers not to discuss sensitive information in front of their smart TVs is actually fairly tame. The warning relates to a voice-recognition feature that has to be explicitly invoked, and which only begins transmitting data when you say the activation phrase “hi, TV”. But other tech that spies on you might not be so genteel.

What is the Healthy Gut Microbiota Composition? A Changing Ecosystem across Age, Environment, Diet, and Diseases While the microbiome of a healthy individual is relatively stable, gut microbial dynamics can certainly be influenced by lifestyle and dietary cultural choices [56]. A study of European children (fed with the Western diet) and Burkina Faso children (assuming a diet rich in millet/sorghum + local vegetables containing very few lipids and animal proteins) [57] revealed that African children’s microbiota have a remarkable abundance of Prevotella and Xylanibacter. Furthermore, Shigella and Escherichia are widely under-represented. Another study [58] compared Hadza hunter-gatherers and Italian gut microbiota. At the phylum level, Hadza gut microbiota are largely enriched in Proteobacteria and Spirochaetes, which are extremely rare in the Italian gut microbiota, whereas Actinobacteria, an important subdominant component of the Italian gut microbiota, are almost absent.

Excitation and Inhibition: The Yin and Yang of the Brain - Knowing Neurons To make a working nervous system, only two forces are necessary: excitation and inhibition. Excitatory signaling from one cell to the next makes the latter cell more likely to fire. Inhibitory signaling makes the latter cell less likely to fire. At chemical synapses in the brain, glutamate and GABA (gamma-aminobutyric acid) are transmitters for excitation and inhibition, respectively. Commenting is Dead. Chat is the New Black. — Affinity Networks Commenting is Dead. Chat is the New Black. How chat will overthrow comments on mobile in 2015 For a decade or more “commenting” has been the gold standard social engagement mechanism.