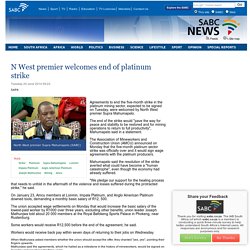 (SABC) Agreements to end the five-month strike in the platinum mining sector, expected to be signed on Tuesday, were welcomed by North West premier Supra Mahumapelo. The end of the strike would "pave the way for peace and stability to be restored and for mining operations to return to full productivity", Mahumapelo said in a statement. The Association of Mineworkers and Construction Union (AMCU) announced on Monday that the five-month platinum sector strike was officially over and it would sign wage agreements with the platinum producers. Mahumapelo said the resolution of the strike averted what could have become a "human catastrophe", even though the economy had already suffered. "We pledge our support for the healing process that needs to unfold in the aftermath of the violence and losses suffered during the protracted strike," he said. Some workers would receive R12,500 before the end of the agreement, he said.

We are on right track towards a decent salary: Mathunjwa:Wednesday 25 June 2014. Amcu President, Joseph Mathunjwa. 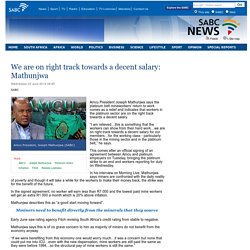 (SABC) Amcu President Joseph Mathunjwa says the platinum belt mineworkers' return to work comes as a relief and indicates that workers in the platinum sector are on the right track towards a decent salary. “I am relieved…this is something that the workers can show from their hard work…we are on right track towards a decent salary for our members…for the working class - particularly those in the mining sector and in the platinum belt,” he says. This comes after an official signing of an agreement between Amcu and platinum employers on Tuesday, bringing the platinum strike to an end and workers reporting for duty on Wednesday.

In his interview on Morning Live, Mathunjwa says miners are confronted with the daily reality of poverty and though it will take a while for the workers to make their money back, the strike was for the benefit of the future. Mathunjwa describes this as “a good start moving forward”. AMCU members celebrate their labour victory:Saturday 12 July 2014. ANC questions EFF involvement in Amcu strike:Monday 9 June 2014. ANC Secretary General Gwede Mantashe says party leadership is most concerned about developments such as the Economic Freedom Fighters (EFF) alleged involvement in negotiations. 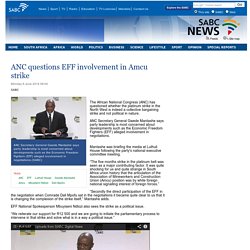 (SABC) The African National Congress (ANC) has questioned whether the platinum strike in the North West is indeed a collective bargaining strike and not political in nature. ANC Secretary General Gwede Mantashe says party leadership is most concerned about developments such as the Economic Freedom Fighters (EFF) alleged involvement in negotiations. Mantashe was briefing the media at Luthuli House following the party's national executive committee meeting. Amcu presents new wage demands:Wednesday 18 June 2014. Amcu members have been on a strike since January. 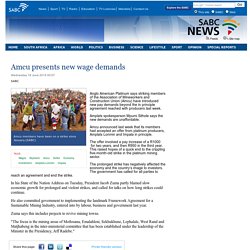 (SABC) Anglo American Platinum says striking members of the Association of Mineworkers and Construction Union (Amcu) have introduced new pay demands beyond the in principle agreement reached with producers last week. Amplats spokesperson Mpumi Sithole says the new demands are unaffordable. Amcu announced last week that its members had accepted an offer from platinum producers, Amplats Lonmin and Impala in principle. The offer involved a pay increase of a R1000 for two years, and then R950 in the third year. The prolonged strike has negatively affected the economy and the country’s image to investors. In his State of the Nation Address on Tuesday, President Jacob Zuma partly blamed slow economic growth for prolonged and violent strikes, and called for talks on how long strikes could continue.

Zuma says this includes projects to revive mining towns. Mathunjwa to address Amcu members on potential strike:Thursday 16 January 2014. Economists say strikes will be a burden to the economy. 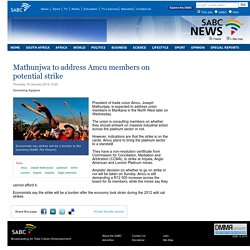 (SABC File Picture) President of trade union Amcu, Joseph Mathunjwa, is expected to address union members in Marikana in the North West later on Wednesday. The union is consulting members on whether they should embark on massive industrial action across the platinum sector or not. However, indications are that the strike is on the cards. Amcu plans to bring the platinum sector to a standstill. They have a non-resolution certificate from Commission for Conciliation, Mediation and Arbitration (CCMA), to strike at Impala, Anglo American and Lonmin Platinum mines. Amplats' decision on whether to go on strike or not will be taken on Sunday. Amcu striking miners hit by bank repossessions:Sunday 18 May 2014.

Some miners have already had their homes repossessed. 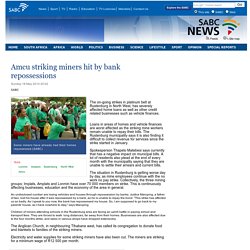 (SABC) The on-going strikes in platinum belt at Rustenburg in North West, has severely affected home loans as well as other credit related businesses such as vehicle finances. Loans in areas of homes and vehicle finances are worst affected as the striking mine workers remain unable to repay their bills. The Rustenburg municipality says it is also finding it difficult to collect revenue for services since the strike started in January. Spokesperson Thapelo Matebesi says currently that has a negative impact on municipal bills. The situation in Rustenburg is getting worse day by day, as mine employees continue with the no work no pay strike. An undisclosed number are losing vehicles and houses through repossession by banks. Children of miners attending schools in the Rustenburg area are facing an uphill battle in paying school and transport fees. Electricity and water supplies for some striking miners have also been cut. Govt to assess effect of Amcu strike on families:Sunday 29 June 2014.

Reports indicate that families have been severely affected by the five month Amcu strike. 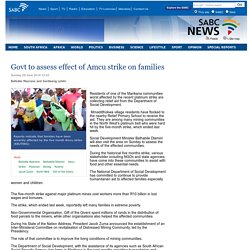 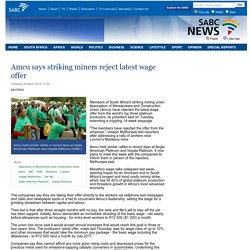 (SABC) Members of South Africa's striking mining union Association of Mineworkers and Construction Union (Amcu) have rejected the latest wage offer from the world's top three platinum producers, its president said on Tuesday, extending a crippling 14-week stoppage. "The members have rejected the offer from the employer," Joseph Mathunjwa told reporters after addressing a rally of workers near Lonmin's Marikana mine. Amcu held similar rallies in recent days at Anglo American Platinum and Impala Platinum. It now plans to meet this week with the companies to inform them in person of the rejection, Mathunjwa said. Marathon wage talks collapsed last week, dashing hopes for an imminent end to South Africa's longest and most costly mining strike, which has hit 40% of global platinum production and threatens growth in Africa's most advanced economy.

Amcu issues Lonmin strike ultimatum:Monday 10 June 2013. Amcu claims to have majority membership at Lonmin's platinum mines in North West and wants to be recognised as such. 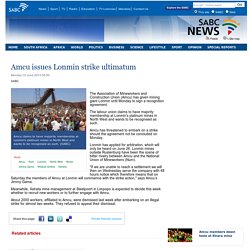 (SABC) The Association of Mineworkers and Construction Union (Amcu) has given mining giant Lonmin until Monday to sign a recognition agreement. The labour union claims to have majority membership at Lonmin's platinum mines in North West and wants to be recognised as such. Striking AMCU members gather at Amplats:Wednesday 2 October 2013.

Amcu members went on strike on Friday protesting over the retrenchment of 3 300 workers. 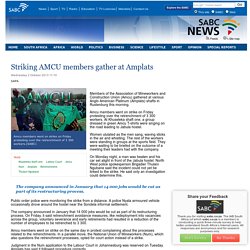 (SABC) Members of the Association of Mineworkers and Construction Union (Amcu) gathered at various Anglo American Platinum (Amplats) shafts in Rustenburg this morning. Amcu members went on strike on Friday protesting over the retrenchment of 3 300 workers. At Khuseleka shaft one, a group dressed in green Amcu T-shirts were singing on the road leading to Jabula hostel.

Women ululated as the men sang, waving sticks in the air and whistling. Impala Platinum faces another Amcu strike :Monday 28 October 2013. Amcu leadership will hear from their members, as to whether tools will be laid down or not. (SABC) Members of trade union Amcu are expected to meet on Monday to decide whether to embark on yet another strike. The CCMA has granted Amcu a certificate of intent following a deadlock in wage negotiations. The union wants members to be paid a minimum of R12 500 a month, while Impala Platinum is offering an 8% wage increase. Court interdicts gold sector strike:Thursday 30 January 2014. Amcu accepts wage offer (with tweets) · sabcnewsonline. Ramathlodi is right person to end Amcu strike: Analyst:Thursday 29 May 2014. Ngoako Ramathlodi has already started engaging relevant parties affected by the strike. (SABC) Labour analyst Terry Bell says newly appointed mineral resources minister, Ngoako Ramathlodi, could just be the right person to bring an end to the ongoing strike in the platinum mining industry.

Labour union Amcu was represented at the meeting by its president Joseph Mathunjwa. Matjunjwa earlier said he would take a new offer to members this week. The minister's spokesperson Mahlodi Muofhe says, "We believe and the minister believes that it will end these talks in good faith. Details of the proposed settlement have not been made public as yet. Analyst unpacks Ramatlhodis intervention in Amcu strike:Thursday 5 June 2014. Ngoako Ramatlhodi's proposed wage offer was rejected by the striking mine workers affiliated to Amcu. (SABC) Labour Analyst Terry Bell says that cautious optimism has to be exercised with the presence of Mineral Resources Minister Ngoako Ramatlhodi in the striking miners' wage negotiations. “I think one can be cautiously optimistic because it seems that Ngoako Ramatlhodi is respected on both sides," Bell was speaking on SAfm's AM Live show on Thursday. "From what I heard from Amcu people as well they think that he is a politically genuine person.

Public spat merges between CCMA, Chamber of Mines:Tuesday 11 March 2014. Hundreds gather for Amcu protest:Thursday 3 April 2014. Amcu members prepare to March to Lonmin offices in Melrose Arch, Rosebank. (Twitter (@WisaniMadibs)) Hundreds of members of labour union Amcu, wearing green shirts, have descended on Melrose Arch in Johannesburg on Thursday for a protest. Members of the Association of Mineworkers and Construction Union gathered on a veld opposite Willow Brook Close and Athol Oaklands Road.

Some wore shirts with slogans such as: "They died for a living wage R12 500. Amcu, CCMA hearing expected to resume :Monday 20 May 2013. The Commission for Conciliation, Mediation and Arbitration (CCMA) hearing involving the Association of Mineworkers and Construction Union (Amcu) and Lonmin platinum mine management is expected to continue on Monday in Pretoria. CCMA is unable to resolve labour disputes: Expert:Thursday 22 May 2014. Amcu has rejected the companies' 10% wage increase which would have seen union members getting a minimum of R12 500 by 2017.

Amcu awaits CCMA meeting with mine bosses on new mandate :Saturday 22 February 2014. Talks that the CCMA had facilitated deadlocked after the platinum companies made their final offer of between 7.5 and 9% this week. Platinum producers, Amcu meetings continue :Friday 20 June 2014.