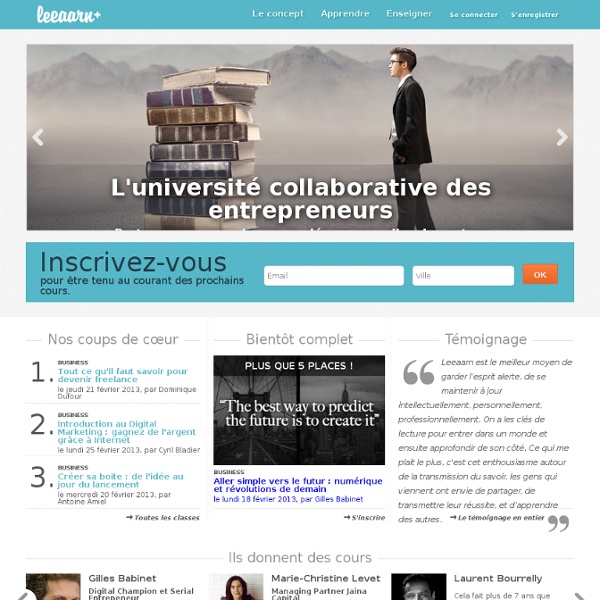 12 Must Watch TED Talks for Entrepreneurs We believe passionately in the power of ideas to change attitudes, lives and ultimately, the world. TED is a circuit of highly popular conferences that present "Ideas Worth Spreading" - which have quickly grown to become some of the most well known conferences around the world. TED has attracted presenters such as Bill Clinton, Jane Goodall, Larry Page, and a large handful of Nobel Prize Winners. Many of the presentations, known as TED Talks, present ideas that are particularly valuable to entrepreneurs.

The Best Mac Apps of 2012 So Far As you some of you may have seen, we recently asked our Twitter and Facebook followers to name their favorite Mac desktop apps of the year so far – thanks again to everyone who sent us suggestions. After a little in-house brainstorming, we took the decision to add a few apps that were released earlier than 2012, but have become very important in our lives this year. Here’s the full selection we came up with, from blockbusters to hidden gems. 1. Angry Birds Space (Game) Emily Miethner - Claudia Chan A: I graduated from the Hofstra University design program in 2010 and the Fine Arts Department is like family to me. Because of the challenging economy, many of my talented creative classmates were discouraged about finding a job they’d be passionate about. Since I had a lot of internship experience, they came to me looking for internship and job advice. I found myself taking their pursuits personally and from then on, I knew I wanted to start something that would help young creative people find their dream jobs.

Stratos Space Jump: Can You Fall Faster Than the Speed of Sound? Image via Red Bull Stratos Project It seems like the Red Bull Stratos jump (redbullstratos.com) is back on track. For those of you not familiar, the basic idea is fairly simple. 9 Breathtaking Places You Can Explore With Google Street View Unless you're planning to travel across the icy Southern Ocean or deep into the Brazilian rainforests for your next vacation, you probably won't see Antarctica or the Amazon anytime soon. The same goes for the world's less remote places. Many of us, depending on location and circumstances, may never see Australia, Asia or even common European tourist attractions. SEE ALSO: 10 Amazing Google Earth and Maps Discoveries

Illustrations & Quotes Apr 13 “Sometimes, you read a book and it fills you with this weird evangelical zeal, and you become convinced that the shattered world will never be put back together unless and until all living humans read the book.” John Green, The Fault in Our Stars. Anna Sophia Robb again :), by me. Aug 30 “Porthos dreams of being a bear, and you want to shatter those dreams by saying he’s *just* a dog?