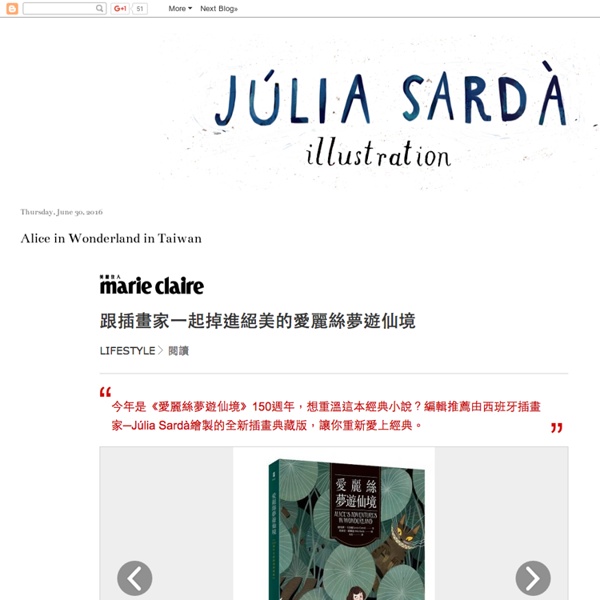 Gorgeous art nouveau-inspired portraits of Miyazaki's characters Is most of what people call Art Nouveau really just Mucha? Often seems to be, Nouveau was pretty diverse (Beardsley, Steinlen, Lautrec, Crane, Klimt), the very prescriptive style of poster with cutout frames, circle motifs and a heavy outline however is Mucha. Although Mucha himself was more diverse than that SExpand Antonio Caparo Illustrations: Mars Sonata - A Work in Progress Some people has been asking me to post a Work in Progress on the blog. I use to keep files of the entire progress of creation of some of my personal images but the hard work is to piece everything together in one tutorial. I made Mars Sonata last year but now I realize I have never posted it so here it goes. Concept and sketch Mars has always fascinated us. It's difficult to explain why but there it is, lonely, deserted, mysterious and most of all, challenging.

New York Times : Jon McNaught Illustrations for the New York times April is the Gnarliest Month : By THAD ZIOLKOWSKI Ambrose Bierce: The Devils Dictionary jon klassen This was posted 2 days ago. It has 344 notes. some tests that Joe Schmidt and I did a few months back. Not for anything specific but they were really fun. This was posted 1 month ago. It has 1,177 notes. Antonio Caparo Illustrations Some people has been asking me to post a Work in Progress on the blog. I use to keep files of the entire progress of creation of some of my personal images but the hard work is to piece everything together in one tutorial. I made Mars Sonata last year but now I realize I have never posted it so here it goes. Concept and sketch Mars has always fascinated us.

Brittney Lee My last pre- APE post! I've spent the last few weeks constructing 10 original mini-paper sculpts that I will be bringing with me to APE! Here they are: Top to Bottom, Left to Right: Snow Owl, Fall Owl, Seahorse, Canary, The Bride, The Dancer, The Good, The Wicked, Fall Fox, and Patisserie A few detail shots! They will be with me at tables 286 and 287, and each piece will probably be priced between $50 and $125. Matt Rockefeller High Resolution Little ‘knight’ self portrait made for the upcoming project 1001Knights organized by Kevin Stanton and Annie Stoll! I made the drawing for this at 3″x3″ on a page from my sketchbook. Hey everyone! It’s been awhile since my last post… I’ve been hard at work on a ton of projects that I can’t quite share with you yet.

Tender Times by Scott C "Pollens" We are so excited to have Scott C. here at Cotton Candy Machine for his first solo show in Brooklyn! Scott's paintings have appeared in galleries and publications around the world. loish blog hello followers! apologies for my absence lately. i’m about to wrap up a long period of client work and will soon get the time to finish off some of the illustrations that have been lying on the shelf, as well as start a couple of new ones! thanks so much for your patience and support :)

Gorgeous Bird Paintings by Adam S. Doyle Artist Adam S. Doyle who recently relocated to Hong Kong creates beautiful gestural paintings of birds, where the seemingly incomplete brushstrokes form the feathers and other details of the animal. In some strange way it reminds me of the story of the Renaissance painter Giotto who is rumored to have been able to draw a perfect circle without the aid of a compass, as if Doyle just picks up a dripping paint brush and in a few seconds paints a perfect bird. In reality his work demonstrates a profound control of the paintbrush and careful understanding of the mediums he works with.

OBI Scrapbook Blog 199 result(s) for Encyclopedia higher resolution Persian art: printed fabric. From Galería del arte decorativo (Gallery of Decorative Art) vol. 2, collective work, Barcelona, 1890. (Source: Universitat Autonoma de Barcelona) Today's Inspiration: Winnie Fitch in the 1950s Last year I posted some 1950s advertising art by a female illustrator of the mid-20th century named Winnie Fitch. After doing some research online I was pleased to discover that Winnie Fitch has a website. I managed to get in touch with Winnie's family and a correspondence began. Not long thereafter, a large manila envelope arrived, bulging with black and white and colour copies of Winnie Fitch's work from all the different periods of her career. Also enclosed; some photos of Winnie and a letter detailing her career.

Steve Smith I don’t know what’s the deal with these hyperrealist artists, once again, great work, but absolutely no information…so I’ll just tell you to look at Steve Smith’s pretty paintings, who apparently dreams of sunny days, holidays and sunglasses. Can’t say I blame him! Simon Stålenhag - Artist Profile - WOW x WOW Simon Stålenhag was born on 20th January 1984. He is a Swedish artist, video game developer and musician, best known for his science fiction inspired paintings of retrofuturistic landscapes. He currently resides in Kungsholmen in Stockholm and was educated in game design at Future Games Academy. Stålenhag produces his paintings digitally using a computer and digital drawing board, in a style that mimics oil or acrylic painting. He has described his images as, “cultural Swedish landscapes from the 80-90’s, populated with robots and dinosaurs.”