Building from source. Building with Eclipse 0. 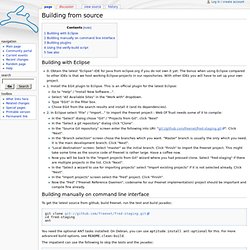 Obtain the latest "Eclipse"-IDE for Java from eclipse.org if you do not own it yet. EGit. Primary Links EGit About This Project EGit is an Eclipse Team provider for the Git version control system. 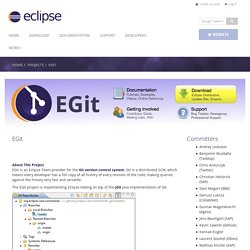 Git is a distributed SCM, which means every developer has a full copy of all history of every revision of the code, making queries against the history very fast and versatile. The EGit project is implementing Eclipse tooling on top of the JGit Java implementation of Git. Thank You for Downloading Eclipse. > #infosec AngeCryption, a tool that... TheAnonNews - Téléchargements mobiles. TheAnonNews - WORLD TECH NEWS ...... TheAnonNews - World is going trough #ebola outbreak and... This is what Anonymous is going to do in the coming months - Cyberwarzone. Who said that Anonymous is dead?! 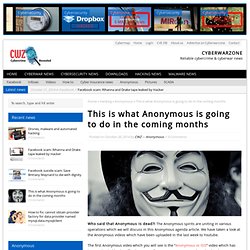 The second video which will get your attention is the Anonymous Message to Rio Grande Valley 2014 #opRGV operation. 2Pac-United Ghetto(Interview) If police in Ferguson treat journalists like this, imagine how they treat residents. It looked at first like police in Ferguson, Missouri, were lashing out at journalists only incidentally. 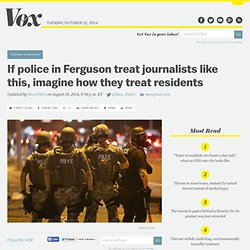 Everyone in their path seemed to be at risk of being teargassed, arrested without charge, or having assault rifles pointed at them without warning — so naturally the reporters milling around town were at similar risk. Increasingly, though, it is becoming clear that police in Ferguson are targeting journalists, using intimidation, arbitrary arrests, and physical force. This has a much deeper and more damaging effect than just suppressing media coverage. Arresting and intimidating journalists are inherently political acts, guaranteed by design to generate attention. Much as when it's done in far-away conflict zones and authoritarian states, it's about making a statement. Everything You Need to Know on TOR & the Deep Web at WhoIsHostingThis.com.

The Internet has, in its storied history, been compared to many things: a river; a superhighway; and, perhaps most famously, a series of tubes. 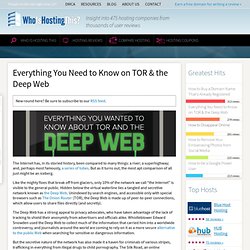 But as it turns out, the most apt comparison of all just might be an iceberg. Like the mighty floes that break off from glaciers, only 10% of the network we call “the Internet” is visible to the general public. Hidden below the virtual waterline lies a tangled and secretive network known as the Deep Web. Unindexed by search engines, and accessible only with special browsers such as The Onion Router (TOR), the Deep Web is made up of peer-to-peer connections, which allow users to share files directly (and secretly). The Other 98% - The Other 98% a partagé une photo de... Occupy Seattle - Black People Riot Over Injustice; White... TomDispatch - Andrew Sullivan takes on the president on...

Rand Paul 2016 - Socialists demanding that everyone pay... What's your reason?... - ONE Canada - UN Canada. Why Is Russia Getting So Aggressive Toward Sweden? Coal seam gas, or clean drinking water. It can’t be both. There are few things more fundamental to our health and wellbeing than access to clean air and water. 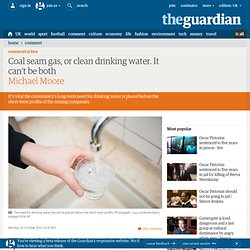 With the release of the chief scientist’s Independent Coal Seam Gas Review report, the moratorium on coal seam gas production in the special areas is set to be lifted. The ban was put in place by former minister Chris Hartcher, who resigned in December 2013 following a raid on his office and inquiry by the independent commission on corruption. Occupy Calgary - p Say good bye to the Cons?... Freedom Of The Press Worldwide. Mic - The myriad allegations leveled against Cosby over... LEE CAMP - The TRUTH about Columbus Day - it's crazier... TomDispatch - Climate Desk on why fracking won't solve... The John Fugelsang Page a partagé une... - The John Fugelsang Page. LEE CAMP - New from #Redacted! More dark money spent on... Some People Think CrossFit Is Nutty and That Makes CrossFit Really Angry. Photo Credit: Ammentorp Photography/Shutterstock October 21, 2014 | Like this article? 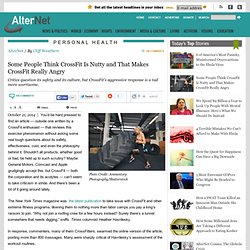 Join our email list: Stay up to date with the latest headlines via email. You’d be hard pressed to find an article — outside one written by a CrossFit enthusiast — that reviews this exercise phenomenon without asking some real tough questions about its safety, effectiveness, cost, and even the philosophy behind it. The New York Times magazine was the latest publication to take issue with CrossFit and other extreme fitness programs, likening them to nothing more than labor camps you pay a king’s ransom to join. In response, commenters, many of them CrossFitters, swarmed the online version of the article, posting more than 800 messages.

AlterNet - Why is CrossFit so defensive? RT - Racial Profiling Experiment. Study Finds What Liberals Are Doing Differently Than Conservatives on Facebook. Differing political views may cost you a friend – at least on Facebook. 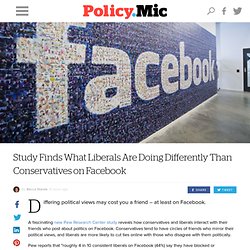 A fascinating new Pew Research Center study reveals how conservatives and liberals interact with their friends who post about politics on Facebook. Conservatives tend to have circles of friends who mirror their political views, and liberals are more likely to cut ties online with those who disagree with them politically.

Pew reports that "roughly 4 in 10 consistent liberals on Facebook (44%) say they have blocked or unfriended someone on social media because they disagreed with something the person posted about on politics. " In comparison, 31% of conservatives and only 26% of all Facebook users have reported to do the same: This unfriending impulse can extend to the real world, too. Still an echo chamber: Just because conservatives aren't pushing the unfriend or block button as often as liberals doesn't mean that they're being more tolerant of opposing viewpoints.

AlterNet - A John's side of the story... Freenet Alternatives for Android - AlternativeTo.net. Installing/POSIX. Requirements Java 6 or later. 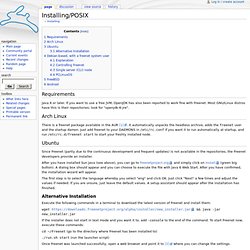 If you want to use a free JVM, OpenJDK has also been reported to work fine with Freenet. Robert Reich - More on why it matters if Republicans take...