The Work We Do While We Sleep. This is the second piece in a three-part series on sleep. 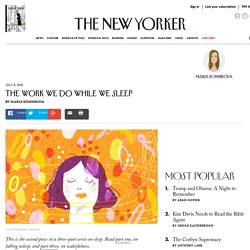 Read part one, on falling asleep, and part three, on wakefulness. It’s strange, when you think about it, that we spend close to a third of our lives asleep. Why do we do it? While we’re sleeping, we’re vulnerable—and, at least on the outside, supremely unproductive. In a 1719 sermon, “Vigilius, or, The Awakener,” Cotton Mather called an excess of sleep “sinful” and lamented that we often sleep when we should be working. But in the past decade, and even the past year, the mystery has seemed to be abating. One line of evidence stems from what happens when sleep is disturbed. For sleep scientists, all of these unpleasant disorders offer tantalizing lines of inquiry. Increasingly, researchers have found ways to test these theories more directly. Do memory lapses help us to be happy? – Marianne Janack. I teach a course on personal identity, and one of the authors we read is John Locke, the 17th-century English philosopher who tells us that our memory constitutes who we are. 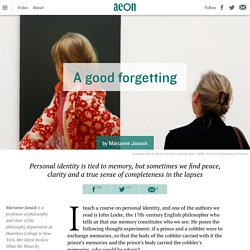 That is, this would be a body transplant for the cobbler and the prince, whose identities would have travelled to new bodies, the princely identity cobbled onto the cobbler’s body; the cobbler’s identity nobly arrayed. Popular now. The Do's and Don'ts for Restful Sleep. Few experiences are as maddening as a restless night. 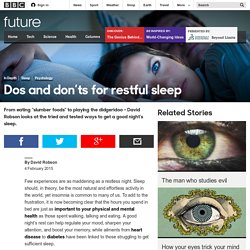 Sleep should, in theory, be the most natural and effortless activity in the world, yet insomnia is common to many of us. To add to the frustration, it is now becoming clear that the hours you spend in bed are just as important to your physical and mental health as those spent walking, talking and eating. A good night’s rest can help regulate your mood, sharpen your attention, and boost your memory, while ailments from heart disease to diabetes have been linked to those struggling to get sufficient sleep. Are you depressed without knowing it? It always amazes me how long it took me to figure out I was depressed. 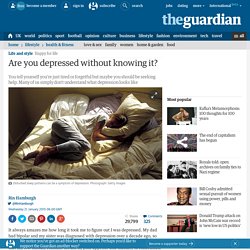 My dad had bipolar and my sister was diagnosed with depression over a decade ago, so you’d think I’d know the signs. But it still took a persistent friend to persuade me that my low moods, constant tiredness, poor appetite and inability to concentrate were all signs of the same thing and that I really did need to seek help. Statistically, between 8% and 12% of us will experience a period of depression before the year is out, according to the Office for National Statistics.

But many will never be diagnosed. Despite increased awareness of mental health issues, people can live with a range of symptoms without ever realising they are depressed – as I did for several months. “Some of my patients have been surprised and shocked when I’ve told them they were depressed,” says clinical psychologist Angel Adams. Vaker hardlopen met meditatie. Het tempo verschilt nogal. 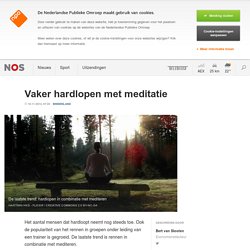 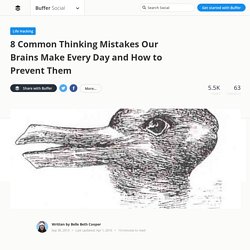 I was seriously shocked at some of these mistakes in thinking that I subconsciously make all the time. Obviously, none of them are huge, life-threatening mistakes, but they are really surprising and avoiding them could help us to make more rational, sensible decisions. Especially as we strive for continued self-improvement as we build Buffer’s social media management platform, if we look at our values, being aware of the mistakes we naturally have in our thinking can make a big difference in avoiding them. Unfortunately, most of these occur subconsciously, so it will also take time and effort to avoid them—if you even want to. Regardless, I think it’s fascinating to learn more about how we think and make decisions every day, so let’s take a look at some of these thinking habits we didn’t know we had. 23 Incredible Benefits Of Getting More Sleep. We're always on the lookout for ways to transform our lives, but sometimes we forget that — along with exercise — there's another miracle drug within our control: sleep. 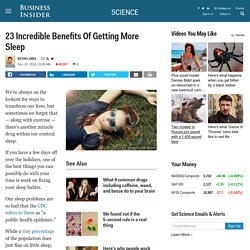 If you have a few days off over the holidays, one of the best things you can possibly do with your time is work on fixing your sleep habits. Our sleep problems are so bad that the CDC refers to them as "a public health epidemic. " While a tiny percentage of the population does just fine on little sleep, those people are incredibly rare. Almost half the population doesn't get enough sleep: 40% of people sleep less than the recommended seven to nine hours a night (teens and children need even more). Why broken sleep is a golden time for creativity – Karen Emslie. It is 4.18am. 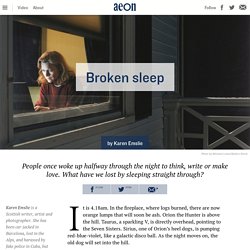 In the fireplace, where logs burned, there are now orange lumps that will soon be ash. Orion the Hunter is above the hill. Taurus, a sparkling V, is directly overhead, pointing to the Seven Sisters. Sirius, one of Orion’s heel dogs, is pumping red-blue-violet, like a galactic disco ball. As the night moves on, the old dog will set into the hill. It is 4.18am and I am awake. Depressie. COLUMN - Soms gaan er dingen mis in je hoofd. 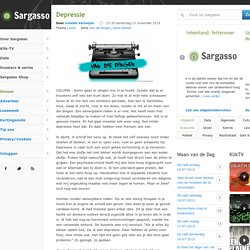 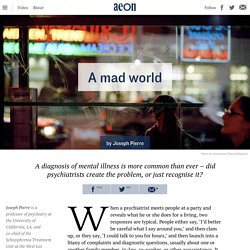 People either say, ‘I’d better be careful what I say around you,’ and then clam up, or they say, ‘I could talk to you for hours,’ and then launch into a litany of complaints and diagnostic questions, usually about one or another family member, in-law, co-worker, or other acquaintance. It seems that people are quick to acknowledge the ubiquity of those who might benefit from a psychiatrist’s attention, while expressing a deep reluctance ever to seek it out themselves. That reluctance is understandable. Although most of us crave support, understanding, and human connection, we also worry that if we reveal our true selves, we’ll be judged, criticised, or rejected in some way. As a psychiatrist, I see this as the biggest challenge facing psychiatry today. Popular now. How Stress Can Change the Size of Our Brains and What We Can Do to Lower It. Stress is something I’ve been intimately acquainted with since I was a teenager. I tend to put a lot of pressure on myself to perform to a high standard, and often end up losing sleep due to stress.

Since I’m working on decreasing stress in my life, I thought it would be interesting to look into how it actually affects our bodies and our brains. Here’s what I found out. Stress is normal, and sometimes even good for us Stress affects pretty much all of us at some point in our lives. Stress isn’t always a bad thing, though. Wonen bij bomen zorgt voor minder problemen met gezondheid. Why the modern world is bad for your brain. Our brains are busier than ever before. We’re assaulted with facts, pseudo facts, jibber-jabber, and rumour, all posing as information. Infographic: Reading Can be Good for Your Health. Reading might be typically associated with a sedentary lifestyle, but it's not all bad.

“People who cook eat a healthier diet without giving it a thought,” Michael Pollan recently told Mark Bittman, both authors and advocates of the cook-it-yourself diet. “It’s the collapse of home cooking that led directly to the obesity epidemic.” Twee-uur-bewegen-tijdens-werkdag-belangrijk-gezondheid. Waarom cookies? Being Mortal: A Surgeon on the Crossroads Between Our Bodies and Our Inner Lives and What Really Matters in the End. By Maria Popova How dying confers upon living “the courage to act on the truth we find.”

“I am not saying that we should love death,” wrote Rilke, perhaps humanity’s greatest sherpa of befriending our mortality, in a 1923 letter, “but rather that we should love life so generously, without picking and choosing, that we automatically include it (life’s other half) in our love.” In Being Mortal: Medicine and What Matters in the End (public library | IndieBound), second-generation surgeon Atul Gawande grants Rilke’s undying words a new dimension in his sublime contribution to the canon of befriending mortality, which stretches from Montaigne’s meditation on death and the art of living to Sherwin Nuland’s foundational treatise on how we die to Alan Lightman’s wisdom on our paradoxical longing for immortality.

But one particular work forever changed Gawande’s worldview as a student — and it wasn’t a medical text. Modern scientific capability has profoundly altered the course of human life. Depressie, wat is dat eigenlijk? Founders On Depression. Last month, I wrote a post asking people working in startups to seek help if they are dealing with depression. How much sleep do you really need? A sleep scientist explains. Seven hours is the new eight hours when it comes to sleep. According to a Wall Street Journal article published yesterday, people who live the longest in the best health get seven hours. One expert even made this frightening statement: "Eight hours or more has consistently been shown to be hazardous. " Whether you were vindicated or frightened by the news, there's more to the story. How to Deal With Stress and Anxiety: 10 Proven Psychological Techniques. Ten techniques you can use to deal with stress that you can’t avoid.

The best way to reduce stress is, of course, to identify the source and get rid of it. Mind and body: Scientists identify immune system link to mental illness. When we are exposed to an infection, for example influenza or a stomach bug, our immune system fights back to control and remove the infection. During this process, immune cells flood the blood stream with proteins such as interleukin-6 (IL-6), a tell-tale marker of infection. ADHD: doe normaal of slik een pil - Wetenschap. Onderzoek: mensen verkiezen pijn boven verveling - Wetenschap & Gezondheid. The Busy Person’s Guide to Reducing Stress. By Leo Babauta. The Future of Depression Treatment May Come from Inducing Worse Depression. Treatment for major depression is currently an often miserable realm full of just almost drug therapies, line after line of psychopharmaceuticals that stem the bleeding without healing the wound(s).