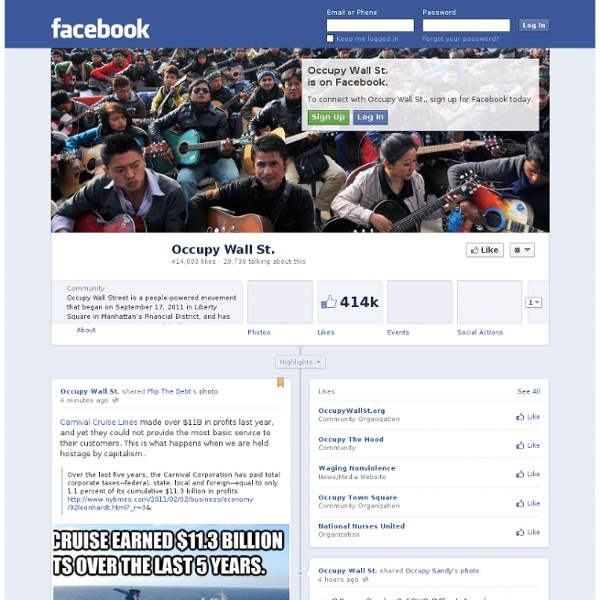 What a wonderful note we got from the Solidarity Sing Along in Madison, WI! "To everyone over at Occupy Wall Street .Net: Warmest Greetings to YOU! We wanted to stop by, say hello, and invite everyone to join us at the State Capitol in Madison for the Solidarity Sing Along. It takes place every single weekday from noon to 1pm. It started on Friday, March 11, 2011 during the noon hour, it never ...ended, and it is going very strong! We love seeing hundreds of new, old, and familiar faces.

Occupy Wall Street leader now works for Google, wants to crowdfund a private militia By Yasha Levine On February 7, 2014 Remember Justine Tunney? The OWS-anarchist-turned-cultist-Google-employee who bashed my reporting on Google’s for-profit surveillance? Well, today she hit the big time. Over the last few days, Tunney has been causing a Twitter outrage tsunami after she took full control of the main Occupy Wall Street (OWS) Twitter account, claimed to be the founder of OWS and then proceeded to tweet out stream of ridiculous anarcho-corporatist garbage. She railed against welfare, described the government as “just another corporation,” argued poverty was not a political problem but “an engineering problem” and told politicians to “get out of the way.”

OCCUPY WALL STREET (the theory) Really simple: Occupy Wall Street is an open source protest. This type of protest has been very effective over the last year in toppling regimes in north Africa. FBI Documents Reveal Secret Nationwide Occupy Monitoring FBI documents just obtained by the Partnership for Civil Justice Fund (PCJF) pursuant to the PCJF’s Freedom of Information Act demands reveal that from its inception, the FBI treated the Occupy movement as a potential criminal and terrorist threat even though the agency acknowledges in documents that organizers explicitly called for peaceful protest and did “not condone the use of violence” at occupy protests. The PCJF has obtained heavily redacted documents showing that FBI offices and agents around the country were in high gear conducting surveillance against the movement even as early as August 2011, a month prior to the establishment of the OWS encampment in Zuccotti Park and other Occupy actions around the country. “The documents are heavily redacted, and it is clear from the production that the FBI is withholding far more material. You can read the FBI - OWS documents below where we have uploaded them in searchable format for public viewing.

It Doesn’t Have To Be This Way There is a story being told about us here in the tech industry in San Francisco — that we are entitled, or that we are oblivious. I don’t believe that’s true. Or I don’t believe that it has to be true. I’m worried that if we do not have a civil discussion soon, the situation will become violent or contentious beyond recognition. We have already seen rocks smash windows. Now, there are unidentified protesters stalking and harassing individual Google employees at their homes. Occupy Wall Street The joyous freedom of possibility. Dissent can be personal, collective, creative — whatever you want it to be. Revolt can be physical or spectral, a blackspot on a corporate logo or a digital mindbomb posted online.

Achievement Unlocked: The SF Class War Reaches Godwin’s Law Yes, Tom Perkins went there. In a letter to the Wall Street Journal published this morning, with the surprising title “Progressive Kristallnacht Coming?,” the legendary venture capitalist compared Nazi Germany’s war on the Jews to “the progressive war on the American one percent.” Before going too much further, let’s get this one little thing out of the way: Nothing should EVER be compared to the Holocaust, a tragedy in which 6 million Jews and another 5 million Germans lost their lives, except the Holocaust, or at the very least, other massive state-run genocides. Godwin’s Law notwithstanding, there are serious issues with Perkins’ letter, both in his perception of the problem and tone deaf reaction to it. “From the Occupy movement to the demonization of the rich embedded in virtually every word of our local newspaper, the San Francisco Chronicle, I perceive a rising tide of hatred of the successful one percent,” Perkins writes.

Occupy Wall Street: Children of the 1% out for a good time at the protests Teens from Bard and Parsons show their solidarity in NYChicago protesters heckle financial industry eventsDozens are arrested, including girl, 14, in first Des Moines protestWall St demonstrators plan march today on millionaires' mansions100 arrested as police clash with protesters in BostonMan falls to his death from car park near San Diego protestersObama senior adviser says President is on demonstrators' side By Paul Bentley and Micaela Mclucas Updated: 16:23 GMT, 11 October 2011 They have branded themselves the 99 per cent, camping out in New York's financial district to protest against corporate greed and financial inequality. Five Ways Occupy Wall Street Has Succeeded #OccupyWallStreet protests are now well into their second week, and they are increasingly capturing the public spotlight. This is because, whatever limitations their occupation has, the protesters have done many things right. I will admit that I was skeptical about the #OccupyWallStreet effort when it was getting started. My main concerns were the limited number of participants and the lack of coalition building.

Armed w/ Military-Grade Weapons, Missouri Police Crack Down on Protests over Michael Brown Shooting This is a rush transcript. Copy may not be in its final form. JUAN GONZÁLEZ: We go now to Ferguson, Missouri. [footage from Ferguson, Missouri] That was the scene in Ferguson, Missouri, just outside of St. Louis last night, as police fired tear gas, stun grenades and smoke bombs to break up a fifth day of protests following the fatal police shooting of Michael Brown. The unarmed African-American 18-year-old was shot dead on Saturday.

Neither Imitate Nor Hate As righteous people, how can we live in a world that is poisonous to our souls, harmful to our minds and at odds with our ideals? Common sense counsels us that we have only two options: either imitate or hate the world. But if we remain stuck within this binary opposition, we will lose ourselves: if we imitate the world we sacrifice our spirit; if we hate the world we succumb to being reactionary and lose the positive passion that grounds our affirmation. What then can we do? This is the question that Seneca, the great Stoic sage, posed nearly two millennia ago. And his answer speaks to today’s struggle of being true to oneself in a corporatist society.

Timeline of Occupy Wall Street Protester on September 28, 2011 The following is a brief timeline of Occupy Wall Street (OWS), a protest which began on Saturday, September 17, 2011[1] on Wall Street, the financial district of New York City. Chronology of events[edit] Michael Moore Visits, Encourages Occupation Of Wall Street Around 7:30 p.m. last night, filmmaker Michael Moore visited the Occupy Wall Street encampment at Zuccotti Park and gave a brief speech. "I am so impressed by what I'm seeing here," Moore said. "You have done something very important and very historic. It had to happen somewhere, it might as well have been here." Happy Birthday Occupy! Rolling Jubilee abolishes $3.85m in Corinthian Colleges students' loan debt Please read and share this wonderful news about the Rolling Jubilee as reported in the Guardian. Then click here for a brief history of the Rolling Jubilee and the activist-tactic of buying and forgiving debt. Over the last few days, over 2,700 Everest College students woke up to find that someone had paid off their private student debt. This was no act of goodwill by the government, which is currently suing Everest parent Corinthian Colleges for its predatory lending practices. Nor is it a gift from Everest itself, which is expected to shutter its doors and possibly leave 72,000 students out of their time and tuition. Instead, the disappearing student loan debt is the second major piece of financial activism by a group of Occupy Wall street activists.