"In its rush to ‘degrade and destroy’... - Amnesty International. Reminder: George W. Bush Said The U.S. Didn't Use Torture. Rudy Giuliani Says Teachers Unions Are To Blame For Violence In Black Communities. Former New York City Mayor Rudy Giuliani has not been shy about airing his opinions on the recent deaths of Michael Brown and Eric Garner at the hands of police officers. 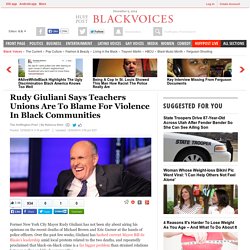 Over the past few weeks, Giuliani has bashed current Mayor Bill de Blasio's leadership amid local protests related to the two deaths, and repeatedly proclaimed that black-on-black crime is a far bigger problem than strained relations between police and black communities. But in an interview with talk show host Geraldo Rivera on Monday, Giuliani added yet another group to the list of people he thinks are exacerbating these problems: teachers unions. Asked by Rivera about de Blasio's response to the situation, Giuliani said that liberals have been ignoring the underlying causes of police brutality against black communities. The former mayor then went on to suggest that teachers unions may be partially to blame. Giuliani also argued in the interview that high crime rates among blacks were a main driver of police brutality. Senate Report: We Tortured Prisoners, It Didn't Work, and We Lied About It. Via the Washington Post, here are the top 10 key findings of the Senate torture report: In plain English: The torture was far more brutal than we thought, and the CIA lied about that. 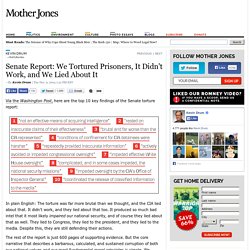 It didn't work, and they lied about that too. It produced so much bad intel that it most likely impaired our national security, and of course they lied about that as well. They lied to Congress, they lied to the president, and they lied to the media. Despite this, they are still defending their actions. The rest of the report is just 600 pages of supporting evidence. Enough with the f***ing rich kids: Our entitled, spoiled 1 percent is destroying everything. Daily Kos - A do-it-yourself litmus test. Blame Harper for the Shameful Mistreatment of Canada's Veterans  Cop May Lose Her Job, Not for Killing Someone on Camera, But For Acting In A Music Video. Memphis, Tennessee – This week, Officer Paris Glass was suspended from the Memphis police department after an anonymous informant accused her of acting in a hip-hop music video. 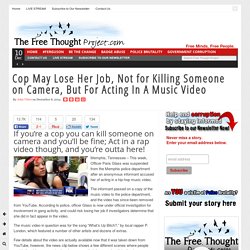 The informant passed on a copy of the music video to the police department, and the video has since been removed from YouTube. According to police, officer Glass is now under official investigation for involvement in gang activity, and could risk losing her job if investigators determine that she did in fact appear in the video. The music video in question was for the song “What’s Up Bitch?

,” by local rapper P. London, which featured a number of other artists and dozens of extras. New York City Council Members Demonstrate After Eric Garner Decision. NEW YORK -- A large group of New York City Council members staged a "die-in" on the steps of City Hall Monday, before marching into the street and blocking traffic, all while chanting “I can’t breathe!” 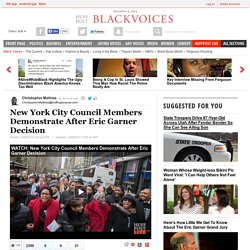 And “Black lives matter!” The protest mimicked the chants and demonstrations that occurred in New York City and across the country this week, in light of a Staten Island grand jury’s decision not to indict the officer who put Eric Garner into a chokehold before the 43-year-old's death. “I am Eric Garner!” About 25 council members screamed in unison Monday, while bringing traffic on Broadway to a five-minute standstill. The council members, joined by a large group of clergy from assorted faiths, read from a long list of victims of police brutality across the country. The reading of the names brought council member Jumaane Williams to tears. The council members -- many of whom were wearing “I can’t breathe!” 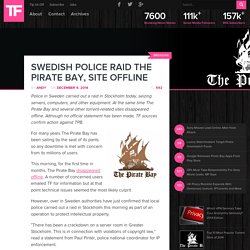 At the same time The Pirate Bay and several other torrent-related sites disappeared offline. Although no official statement has been made, TF sources confirm action against TPB. For many years The Pirate Bay has been sailing by the seat of its pants so any downtime is met with concern from its millions of users. This morning, for the first time in months, The Pirate Bay disappeared offline. A number of concerned users emailed TF for information but at that point technical issues seemed the most likely culprit. However, over in Sweden authorities have just confirmed that local police carried out a raid in Stockholm this morning as part of an operation to protect intellectual property.

Cia-torture-report-key-points. Yeah no, let's not let this law go into... - Fight For The Future. Hannity To Tavis Smiley About The Role Of Race In Recent Police Killings: "You Need To Be Educated" Facebook. Linda Tirado on the realities of living in bootstrap America: daily annoyances for most people are catastrophic for poor people. Photo by tsuacctnt via Flickr Excerpted from Hand to Mouth: Living in Bootstrap America by Linda Tirado. 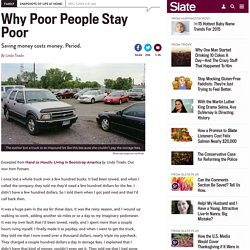 Out now from Putnam. I once lost a whole truck over a few hundred bucks. It had been towed, and when I called the company they told me they’d need a few hundred dollars for the fee. I didn’t have a few hundred dollars. Alan Grayson - "Walmart is a machine that exists only for... Daily Kos - Photos du journal. Occupy Edmonton - The Athabasca Chipewyan First Nation, a... Occupy Calgary - Being a cop showed me just how racist and... A fascinating talk on the contradictions... - Creating Freedom.