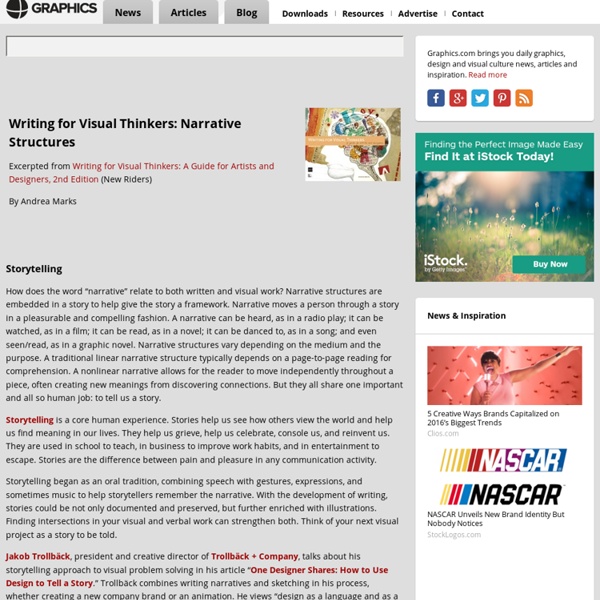 How Stories Change the Brain Ben’s dying. That’s what Ben’s father says to the camera as we see Ben play in the background. Ben is two years old and doesn’t know that a brain tumor will take his life in a matter of months. Ben’s father tells us how difficult it is to be joyful around Ben because the father knows what is coming. But in the end he resolves to find the strength to be genuinely happy for Ben’s sake, right up to Ben’s last breath.

11 Fascinating Facts About ‘Goodnight Moon’ Goodnight Moon, a deceptively simple children’s book that falls somewhere between a going-to-sleep narrative and a lullaby, will turn 68 later this year—and yet it remains one of the most universal cultural references even all these decades later. Here are a few things you might not have known about Margaret Wise Brown's sparse classic. 1. Goodnight Moon's style reflects real childhood semantics. Brown was born in 1910 to moderately wealthy but distant and bickering parents. Storytelling in the Classroom Why Storytelling? Educators have long known that the arts can contribute to student academic success and emotional well being. The ancient art of storytelling is especially well-suited for student exploration. As a folk art, storytelling is accessible to all ages and abilities. No special equipment beyond the imagination and the power of listening and speaking is needed to create artistic images.

Politics and the English Language Cover of the Penguin edition "Politics and the English Language" (1946) is an essay by George Orwell that criticised the "ugly and inaccurate" written English of his time and examines the connection between political orthodoxies and the debasement of language. The essay focuses on political language, which, according to Orwell, "is designed to make lies sound truthful and murder respectable, and to give an appearance of solidity to pure wind". Orwell believed that the language used was necessarily vague or meaningless because it was intended to hide the truth rather than express it. This unclear prose was a "contagion" which had spread to those who did not intend to hide the truth, and it concealed a writer's thoughts from himself and others.[1] Orwell encourages concreteness and clarity instead of vagueness, and individuality over political conformity.

Ep 88: How to Develop Your Own Self-Study Writing Course - Ann Kroeker, Writing Coach Podcast: Play in new window | Download (Duration: 5:00 — 4.6MB) | Embed Subscribe: Apple Podcasts | Android | RSS As you go about the work of writing, and the business of writing, don’t forget to study the craft of writing. Find ways to continually learn and improve. A lot of writers feel a strong urge to enter an MFA program to do this.

School of Education at Johns Hopkins University-In A Single Bound: A Short Primer on Comics for Educators by Drego Little There is a long and well-documented history of prejudice against comics and what educators think they might represent. Despite this history, comics have a strong following among writers and other serious artists. Sadly, this admiration for comics and their creators has not been widespread among educators. 6 Easy Steps to Unforgettable Characters By Laurence MacNaughton, @LMacNaughton Part of the How They Do It Series (Contributing Author) Readers will pick up your book because of the concept, but they’ll keep reading because of the characters.

How To Structure A Story: The 8 Point Arc By Ali Hale - 3 minute read One of my favourite “how to write” books is Nigel Watts’ Writing A Novel and Getting Published. My battered, torn and heavily-pencil-marked copy is a testament to how useful I’ve found it over the years. Although the cover appears to be on the verge of falling off altogether, I’ve risked opening the book once more to bring you Watts’ very useful “Eight-Point Story Arc” – a fool-proof, fail-safe and time-honoured way to structure a story. Non-Fiction Writing General Non-Fiction Ideas / Resources: Activity Clues - A fun writing task which requires children to think of clues related to particular activities. Write to Santa! - Send a letter to Santa at Christmas, and receive a reply too! Describing Yourself - A game, useful for the beginning of term, which helps you and the children get to know each other. Letter Writing - Writing letters can be extremely enjoyable for children, and this page shows you how. Letter Writing Frame - A great letter writing frame for your children to use (PDF).

Thinking Through Our Fingers A picture is worth a thousand words. We’re all familiar with that idiom. As writers, our goal is to use way fewer than a thousand words to paint that perfect picture. We want those pictures to come alive for our readers. But here’s the thing, if you only paint a pretty picture, you risk leaving your readers on the outside looking in when what you really want is to lure them in. How Visual Thinking Improves Writing Younger kids typically love to draw and aren’t too worried about the outcomes of their artwork — until they get older. By the time they’ve learned to read and write, art takes a back burner to academics, primarily because of what most schools prioritize. Over time it becomes harder for kids to think in pictures the way they once did.

The Six Main Stories, As Identified by a Computer - The Atlantic “My prettiest contribution to my culture,” the writer Kurt Vonnegut mused in his 1981 autobiography Palm Sunday, “was a master’s thesis in anthropology which was rejected by the University of Chicago a long time ago.” By then, he said, the thesis had long since vanished. (“It was rejected because it was so simple and looked like too much fun,” Vonnegut explained.) But he continued to carry the idea with him for many years after that, and spoke publicly about it more than once. It was, essentially, this: “There is no reason why the simple shapes of stories can’t be fed into computers.