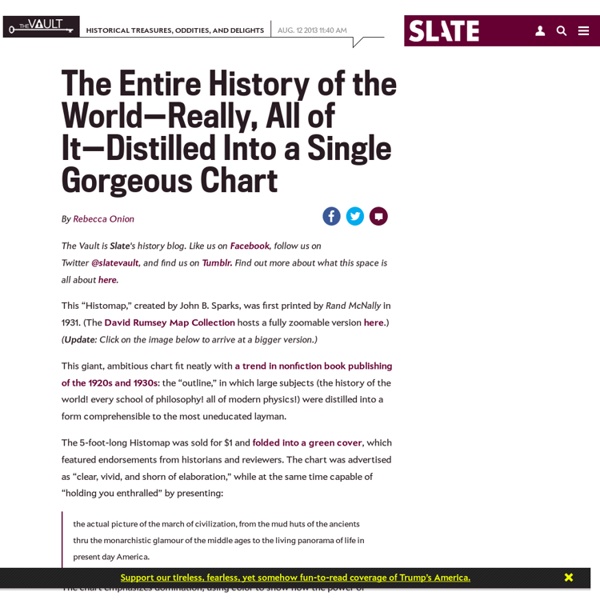 The Vault is Slate's history blog. Like us on Facebook, follow us on Twitter @slatevault, and find us on Tumblr. Find out more about what this space is all about here. This “Histomap,” created by John B. Sparks, was first printed by Rand McNally in 1931. (The David Rumsey Map Collection hosts a fully zoomable version here.) This giant, ambitious chart fit neatly with a trend in nonfiction book publishing of the 1920s and 1930s: the “outline,” in which large subjects (the history of the world! The 5-foot-long Histomap was sold for $1 and folded into a green cover, which featured endorsements from historians and reviewers. the actual picture of the march of civilization, from the mud huts of the ancients thru the monarchistic glamour of the middle ages to the living panorama of life in present day America. This stunning geological map of Europe was produced in 1875 by Andre Dumont, a Belgian scientist and mapmaker. It’s unclear what the width of the colored streams is meant to indicate.

Don’t rush to Nepal to help. Read this first As someone who has considered Nepal home for many years, the shock on hearing the news of the earthquake that has devastated the country was extreme. I felt pained at being away from home – cut off in rural Cambodia – at a time like this, impotent and powerless. The quake has left thousands dead, many more injured and even more without shelter.

German ancestry, Sexual perversion in the royal family, Prince Charles, Elizabeth II, Antichrist and the Green Prince, British Royal occultism European Royalty and Biblical prophecy 15 Jan 2016 - BANKING PIRATES OF THE CITY OF LONDON [see below] See Tim Cohen and Martin Lauchenauer's sites for some of the latest info. Occult Symbol of the Phoenix in Charles' back garden! 52 Places to Go in 2015 A revitalized city welcomes the world. Sure, Italy is rich with romantic cities like Florence, Venice and Rome — but its most vibrant might just be Milan. And this is the year for tourists to explore its charms, as it hosts the 2015 World Expo.

That Time Badass Feminist Queen Elizabeth II Gave Saudi Arabia's King a Lesson in Power Press Association/AP Great Britain's Queen Elizabeth II is known to have a wicked sense of humor, and some mean driving skills. One day back in 1998, she deployed both spectacularly to punk Saudi Arabia's late King Abdullah bin Abdulaziz. Back then, Abdullah was a Saudi crown prince visiting Balmoral, the vast royal estate in Scotland. The Queen had offered him a tour of the grounds—here's what happened next, according to former British ambassador to Saudi Arabia Sir Sherard Cowper-Coles: The royal Land Rovers were drawn up in front of the castle.

Culture - The 21st Century’s 12 greatest novels 12. Jeffrey Eugenides, Middlesex (2002) What are the greatest novels of the opening years of this tumultuous century? In search of a collective critical assessment, BBC Culture contributor Jane Ciabattari polled several dozen book critics, including The New York Times Book Review’s Parul Sehgal, Time magazine's book editor Lev Grossman, Newsday book editor Tom Beer, Bookslut founder Jessa Crispin, C Max Magee, founder of The Millions, Booklist's Donna Seaman, Kirkus Reviews' Laurie Muchnick and many more. We asked each to name the best novels published in English since 1 January 2000. The critics named 156 novels in all, and based on the votes these are the top 12.

Push to Kindle Send by E-mail Push to Kindle can also be used by e-mail. This is particularly useful for iPad, iPhone and Windows Phone users. To use the service from one of these devices, follow the steps below: Note: The email service is free for the first 25 articles, after that it requires sustainer membership. How to Improve Your Handwriting – A Refresher by Kristin Nohe A refresher by Kristin Nohe Kristin Nohe spent her childhood obsessively filling sketchbooks in Bel Air, Maryland. Her first job after graduatingwith aBFA in Illustration was designing seasonal products for Target for 4 years.