How Stories Change the Brain 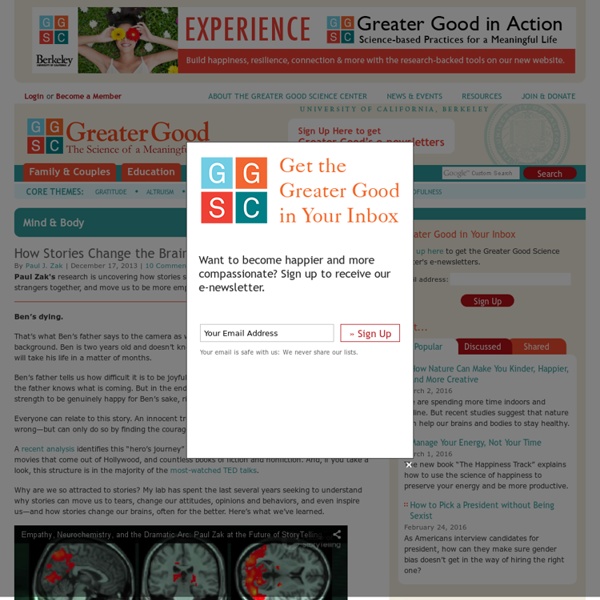 Ben’s dying. That’s what Ben’s father says to the camera as we see Ben play in the background. Ben is two years old and doesn’t know that a brain tumor will take his life in a matter of months. Ben’s father tells us how difficult it is to be joyful around Ben because the father knows what is coming. Everyone can relate to this story. A recent analysis identifies this “hero’s journey” story as the foundation for more than half of the movies that come out of Hollywood, and countless books of fiction and nonfiction. Why are we so attracted to stories? Why the brain loves stories The first part of the answer is that as social creatures who regularly affiliate with strangers, stories are an effective way to transmit important information and values from one individual or community to the next. Think of this as the “car accident effect.” To understand how this works in the brain, we have intensively studied brain response that watching “Ben’s story” produces. What makes a story effective? Related:  Storytelling Concepts

School of Education at Johns Hopkins University-In A Single Bound: A Short Primer on Comics for Educators by Drego Little There is a long and well-documented history of prejudice against comics and what educators think they might represent. Despite this history, comics have a strong following among writers and other serious artists. The Nuts and Bolts of Comics Comics are still not considered "reading" by too many educators; an attitude that persists even though when a student is reading a comic (especially a good one) he or she is actually reading on three different levels. Closure provides most of the action in comics. Narrative density enables an artist to say a tremendous amount with a single panel. Causative evidence is elusive, but internationally the countries with high youth literacy rates also have vibrant comics cultures, notably Finland and Japan. If reader interest is important in literacy (it is) and if the way to better and higher levels of literacy for all children is the goal, any text that appeals to millions of young readers around the world deserves to be taken seriously.

About 42 Students Montreal and LA 2 Teachers 10 Stories 1 Rocket into space Working together each day to get a robot back to her home. Students will research, explore and discover as the robot makes her way across North America. Robot Hearts Stories is an experiential learning project that uses collaboration and creative problem solving to put education directly in the hands of students. This fall, two classrooms, a continent apart, will work together to get a lost robot home, and they will need your help… The experience begins when a robot crash lands in Montreal and must make her way to LA in order to find her space craft and return home. At the same time, Robot Hearts Stories extends beyond the classroom, as the project welcomes involvement from a global audience. Robot Heart Stories is the first in a trilogy of experiential learning projects from award winning storytelling pioneer Lance Weiler and creative producer Janine Saunders. Come join the fun! Contact Us How do I follow the progress?

How Visual Thinking Improves Writing Younger kids typically love to draw and aren’t too worried about the outcomes of their artwork — until they get older. By the time they’ve learned to read and write, art takes a back burner to academics, primarily because of what most schools prioritize. Over time it becomes harder for kids to think in pictures the way they once did. But what if students were encouraged to think in pictures alongside words? “There’s something about writing that is a link to your brain,” said Marissa Moss, author of the popular children’s book series Amelia’s Notebook. In the books, Moss takes on the persona of a little girl expressing her ideas about the world and people around her. Taking a cue from Moss, teachers from Oak Knoll Elementary School in Menlo Park, Calif., decided to have their students keep notebooks in a similar style. “They’re not used to being given permission to write about whatever they want,” Clancy said. Now, the students write four to five times a week for 45 minutes at a time.

Land of Opportunity If you are an educator or a community group, we want to work with you! The multi-layered, interactive nature of the platform is designed to engage students and community members with deep learning and real and relevant action. It is our hope that educators--as well as the larger community--will use this platform as a tool for not only researching these pivotal social issues, but also connecting with ways to take action. Larger Screenings & Events with Paid Admission The Land of Opportunity film is available for screening at academic, professional, religious, and social justice conferences. Conferences and Speakers The filmmakers are also available to attend conferences, screening events and classes where the film is shown.

Strategies in Visual Narrative Strategies in Visual Narrative ©Werner Hammerstingl 1998,1999 Narrative 1. We can distinguish between linear and non-linear narrative. Linear narrative: Is built on traditional notions of linearity and univocity, has a beginning, middle and end and is usually logically sequential in nature. Non-linear narrative: Contains elements such as : interruption, circular and unfinished references, chronological anarchy. In this lecture we are going to explore the dynamics and strategies involved in creating a narrative structure for still and time-based visual material. Take a single photograph - any photograph - and you have narrative. Because you have signification (the fact or property of being significant or expressive of something). The pre-photographic meaning of what is being framed and photographed by the camera The process of de-coding the signs in the photograph, governed as it is by cultural, ideological and personal histories. Summary of Codes (1) (a) Figures. (b) Signs. (c) Semes.

8 Classic storytelling techniques for engaging presentations A good public speaker takes their audience on a journey, leaving them feeling inspired and motivated. But structuring your speech to get your ideas across and keep your audience engaged all the way through is tricky. Try these eight storytelling techniques for a presentation that wows. You’re doing a presentation, so you start with the facts you want to get across. Deliver a presentation that captures the hearts and heads of your audience by stealing one of these classic storytelling techniques. 1. The monomyth (also called the hero’s journey), is a story structure that is found in many folk tales, myths and religious writings from around the world. In a monomyth, the hero is called to leave their home and sets out on a difficult journey. After overcoming a great trial, they return home with a reward or newfound wisdom – something which will help their community. Using the monomyth to shape your presentation can help you to explain what has brought you to the wisdom you want to share.