Businessinsider. COLLECTIVE HOUSE - SHIBUYA CAST. APARTMENT Shibuya cast apartment [the Shibuya cast] A room of one’s own: How an art community came to life in Kampung Attap. The refurbished Zhongshan Building in Kampung Attap was once a row of 1950s interconnected shophouses. — Pictures by Choo Choy MayKUALA LUMPUR, July 2 — It’s increasingly common for old, dilapidated buildings to be rejuvenated into boutique hotels or fusion-themed cafés. 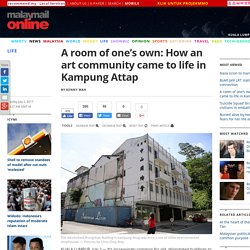 Far rarer for a slice of the history to be imbued with fresh life, one that’s still in the process of transforming and understanding the world around it. One could make a decent case study of the Zhongshan Building in Kampung Attap. Once a row of 1950s interconnected shophouses, the Zhongshan Building used to house the Selangor Zhongshan Association, a frozen foods distributor and various merchants over the years. Today, spearheaded by OUR ArtProjects, a contemporary art gallery founded by Liza Ho and Snow Ng, the building has been transformed into a vibrant independent arts hub.

Both discovered a mutual love of art management and started OUR ArtProjects in 2013. Bespoke tailor Atelier Fitton. On Flipboard. A bizarre physics law is making superfluid helium behave like an actual black hole. Of all the laws of physics, this is arguably one of the strangest - scientists have discovered that the forces controlling the behaviour of a black hole's event horizon are also at play in superfluid helium, an extraordinary liquid that flows without friction. 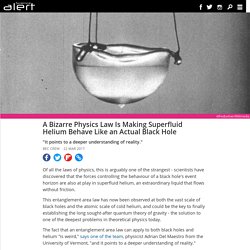 This entanglement area law has now been observed at both the vast scale of black holes and the atomic scale of cold helium, and could be the key to finally establishing the long sought-after quantum theory of gravity - the solution to one of the deepest problems in theoretical physics today. The fact that an entanglement area law can apply to both black holes and helium "is weird," says one of the team, physicist Adrian Del Maestro from the University of Vermont, "and it points to a deeper understanding of reality. " Entropy is how we describe the progression of a system from order to disorder - an untouched egg has low entropy, but a scrambled egg has high entropy. The 1931 Histomap: The entire history of the world distilled into a single map/chart. The Vault is Slate's history blog. 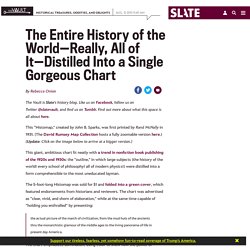 Like us on Facebook, follow us on Twitter @slatevault, and find us on Tumblr. Find out more about what this space is all about here. This “Histomap,” created by John B. Sparks, was first printed by Rand McNally in 1931. (The David Rumsey Map Collection hosts a fully zoomable version here.) This giant, ambitious chart fit neatly with a trend in nonfiction book publishing of the 1920s and 1930s: the “outline,” in which large subjects (the history of the world! The 5-foot-long Histomap was sold for $1 and folded into a green cover, which featured endorsements from historians and reviewers. 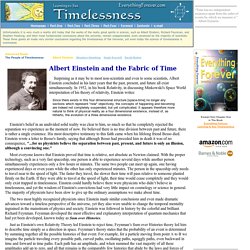 In 1952, in his book Relativity, in discussing Minkowski's Space World interpretation of his theory of relativity, Einstein writes: Since there exists in this four dimensional structure [space-time] no longer any sections which represent "now" objectively, the concepts of happening and becoming are indeed not completely suspended, but yet complicated. It appears therefore more natural to think of physical reality as a four dimensional existence, instead of, as hitherto, the evolution of a three dimensional existence. Einstein's belief in an undivided solid reality was clear to him, so much so that he completely rejected the separation we experience as the moment of now.

Most everyone knows that Einstein proved that time is relative, not absolute as Newton claimed. It's official: time crystals are a new state of matter, and now we can create them. Earlier this year, physicists had put together a blueprint for how to make and measure time crystals - a bizarre state of matter with an atomic structure that repeats not just in space, but in time, allowing them to maintain constant oscillation without energy. 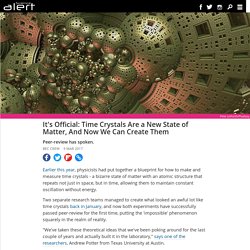 Two separate research teams managed to create what looked an awful lot like time crystals back in January, and now both experiments have successfully passed peer-review for the first time, putting the 'impossible' phenomenon squarely in the realm of reality. "We've taken these theoretical ideas that we've been poking around for the last couple of years and actually built it in the laboratory," says one of the researchers, Andrew Potter from Texas University at Austin. "Hopefully, this is just the first example of these, with many more to come. " Decoding Space and Time in the Brain - Scientific American Blog Network. "...henceforth, space by itself, and time by itself, are doomed to fade away into mere shadows, and only a kind of union between the two will preserve an independent reality. 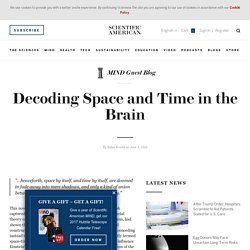