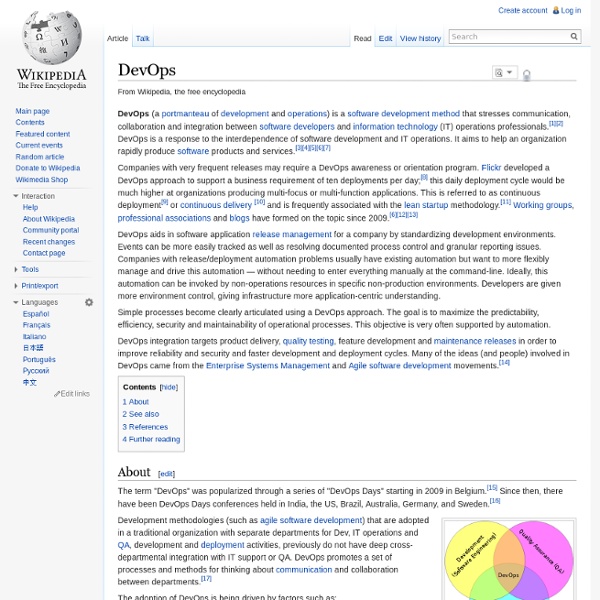 DevOps (a portmanteau of development and operations) is a software development method that stresses communication, collaboration and integration between software developers and information technology (IT) operations professionals.[1][2] DevOps is a response to the interdependence of software development and IT operations. It aims to help an organization rapidly produce software products and services.[3][4][5][6][7] Companies with very frequent releases may require a DevOps awareness or orientation program. Flickr developed a DevOps approach to support a business requirement of ten deployments per day;[8] this daily deployment cycle would be much higher at organizations producing multi-focus or multi-function applications. This is referred to as continuous deployment[9] or continuous delivery [10] and is frequently associated with the lean startup methodology.[11] Working groups, professional associations and blogs have formed on the topic since 2009.[6][12][13] About[edit] See also[edit]

Puppet versus Chef: 10 reasons why Puppet wins Puppet, Chef, cfengine, and Bcfg2 are all players in the configuration management space. If you’re looking for Linux automation solutions, or server configuration management tools, the two technologies you’re most likely to come across are Puppet and Opscode Chef. They are broadly similar in architecture and solve the same kinds of problems. Puppet, from Reductive Labs, has been around longer, and has a large user base. Chef, from Opscode, has learned some of the lessons from Puppet’s development, and has a high-profile client: EngineYard. Heterogeneous System Architecture Steps performed when offloading calculations to the GPU on a non-HSA system Steps performed when offloading calculations to the GPU on a HSA system, using the HSA functionality Heterogeneous computing is widely used in system-on-chip devices, such as tablets, smartphones, and other mobile devices.[5] HSA allows programs to use the graphics processor for floating point calculations without separate memory or scheduling.[6]

Puppet Open Source: IT Automation Software for System Administrators Puppet Open Source is a flexible, customizable framework available under the Apache 2.0 license designed to help system administrators automate the many repetitive tasks they regularly perform. As a declarative, model-based approach to IT automation, it lets you define the desired state - or the “what” - of your infrastructure using the Puppet configuration language. Once these configurations are deployed, Puppet automatically installs the necessary packages and starts the related services, and then regularly enforces the desired state. In automating the mundane, Puppet frees you to work on more challenging projects with higher business impact. Puppet Open Source is the underlying technology for Puppet Enterprise and runs on all major Linux distributions, major Unix platforms like Solaris, HP-UX, and AIX, and Microsoft Windows.

What Is This Devops Thing, Anyway? What problems are we trying to solve? Let's face it - where we are right now sucks. In the IT industry, or perhaps to be more specific, in the software industry, particularly in the web-enabled sphere, there's a tacit assumption that projects will run late, and when they're delivered (if they’re ever delivered), they will underperform, and not deliver well against investment.

Scrum (software development) Scrum is an iterative and incremental agile software development framework for managing product development. It defines "a flexible, holistic product development strategy where a development team works as a unit to reach a common goal", challenges assumptions of the "traditional, sequential approach" to product development, and enables teams to self-organize by encouraging physical co-location or close online collaboration of all team members, as well as daily face-to-face communication among all team members and disciplines in the project. A key principle of Scrum is its recognition that during a project the customers can change their minds about what they want and need (often called "requirements churn"), and that unpredicted challenges cannot be easily addressed in a traditional predictive or planned manner. Later, Schwaber with others founded the Scrum Alliance and created the Certified Scrum Master programs and its derivatives.

TokuDB A Community Edition of TokuDB was released under a modified GNU General Public License in April 2013.[2] Fractal tree indexes[edit] Overview[edit] Uses[edit] Puppet (software) Puppet is a tool designed to manage the configuration of Unix-like and Microsoft Windows systems declaratively. The user describes system resources and their state, either using Puppet's declarative language or a Ruby DSL (domain-specific language). This information is stored in files called "Puppet manifests". Puppet discovers the system information via a utility called Facter, and compiles the Puppet manifests into a system-specific catalog containing resources and resource dependency, which are applied against the target systems.

Information Technology Infrastructure Library ITIL (formerly known as the Information Technology Infrastructure Library) is a set of practices for IT service management (ITSM) that focuses on aligning IT services with the needs of business. In its current form (known as ITIL 2011 edition), ITIL is published as a series of five core volumes, each of which covers a different ITSM lifecycle stage. Although ITIL underpins ISO/IEC 20000 (previously BS15000), the International Service Management Standard for IT service management, the two frameworks do have some differences. ITIL describes processes, procedures, tasks, and checklists which are not organization-specific, but can be applied by an organization for establishing integration with the organization's strategy, delivering value, and maintaining a minimum level of competency.

Continuation The "current continuation" or "continuation of the computation step" is the continuation that, from the perspective of running code, would be derived from the current point in a program's execution. The term continuations can also be used to refer to first-class continuations, which are constructs that give a programming language the ability to save the execution state at any point and return to that point at a later point in the program. History[edit] The earliest description of continuations was made by Adriaan van Wijngaarden in September 1964.

CFEngine History[edit] CFEngine 1[edit] The CFEngine project began in 1993 as a way for author Mark Burgess (then a post-doctoral fellow of the Royal Society at Oslo University, Norway) to get his work done by automating the management of a small group of workstations in the Department of Theoretical Physics. Like many post-docs and PhD students, Burgess ended up with the task of managing Unix workstations, scripting and fixing problems for users manually. The Pomodoro Technique® What is The Pomodoro Technique? EASY for anyone to use! Improves productivity IMMEDIATELY! FUN to do! Why Pomodoro? The Pomodoro Technique isn’t like any other time-management method on the market today.

Lightning Memory-Mapped Database LMDB may also be used concurrently in a multi-threaded or multi-processing environment, with read performance scaling linearly by design. LMDB databases may have only one writer at a time, however unlike many similar key-value databases, write transactions do not block readers, nor do readers block writers. LMDB is also unusual in that multiple applications on the same system may simultaneously open and use the same LMDB store, as a means to scale up performance. Also, LMDB does not require a transaction log (thereby increasing write performance by not needing to write data twice) because it maintains data integrity inherently by design.

Introducing Metal as a Service: provisioning for the hyperscale era As we move from “tens” to “hundreds” to “thousands” of nodes in a typical data centre we need new tools and practices. This hyperscale story – of hyper-dense racks with wimpy nodes – is the big shift in the physical world which matches the equally big shift to cloud computing in the virtualised world. Ubuntu’s popularity in the cloud comes in part from being leaner, faster, more agile. And MAAS – Metal as a Service – is bringing that agility back to the physical world for hyperscale deployments. Servers used to aspire to being expensive.

you can define DevOps as system administrators participating in an agile development process alongside developers and using a many of the same agile techniques for their systems work. by nicolas Feb 9