Graphing the history of philosophy « Drunks&Lampposts 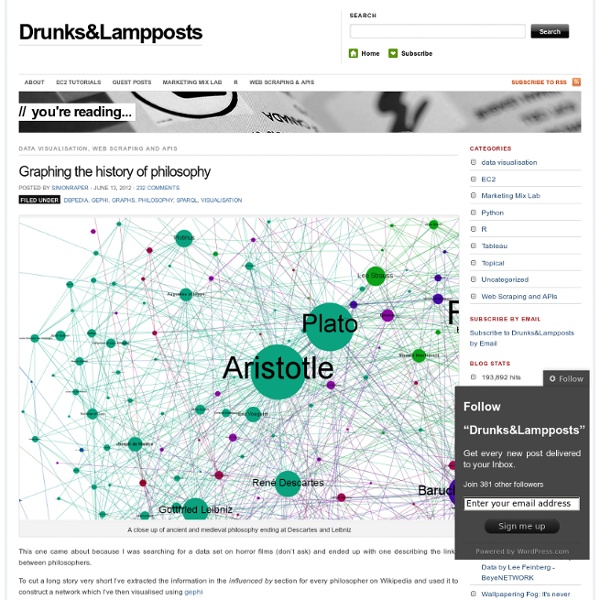 A close up of ancient and medieval philosophy ending at Descartes and Leibniz If you are interested in this data set you might like my latest post where I use it to make book recommendations. This one came about because I was searching for a data set on horror films (don’t ask) and ended up with one describing the links between philosophers. To cut a long story very short I’ve extracted the information in the influenced by section for every philosopher on Wikipedia and used it to construct a network which I’ve then visualised using gephi It’s an easy process to repeat. It could be done for any area within Wikipedia where the information forms a network. First I’ll show why I think it’s worked as a visualisation. Each philosopher is a node in the network and the lines between them (or edges in the terminology of graph theory) represents lines of influence. It gets more interesting when we use Gephi to identify communities (or modules) within the network. It has been fairly successful. Simon

5 Petty Feuds That Shaped the Modern World Everyone's been caught in the midst of a petty feud, where two people with trivial differences screw things up for everyone around them. These mostly occur in middle school and really shitty divorces, but some petty feuds have shaped the modern world. Just because they're titans of business and leaders of nations, that doesn't mean grown men are above letting some name-calling influence their decisions. For instance ... #5. A Misheard Sentence Shapes the Shoe Market Getty Adolf and Rudolf Dassler were German brothers who shared a passion for shoemaking, and eventually they shared ownership of the Dassler Brothers Shoe Factory. Also unlike Hitler, the brothers' shoe-selling prowess survived World War II, and today they sell more athletic shoes and apparel than anyone other than Nike and Reebok. Via Stuartslondon.comAdolf, creator of Adidas. One night during an Allied bombing raid, Rudolf was sitting in his bomb shelter with his family when Adolf and his wife joined them. #4. #3.

Oh, (No) Canada! Borderlines explores the global map, one line at a time. July 22, 1948 is a red-letter day in alternate history. On that date, a new nation could have been born in the North America. A referendum on the constitutional future of the Dominion of Newfoundland — until then a separate entity within the British Commonwealth, with the same level of independence as Australia or New Zealand [1] — produced a slight majority for confederation with Canada, by 78,323 votes to 71,334. A swing of just 3,500 votes would have created a new state in the extreme northeast of the North American continent. Now nearing the 64th anniversary of its Independence Day, that Republic of Newfoundland — blessed with a small population [2] and ample natural resources [3] — might have become a beacon of state-sponsored prosperity à la Scandinavia. That didn’t happen, of course, but it’s not idle speculation, either. So on midnight of March 31, 1949, Newfoundland became Canada’s 10th (and last) province [6].

Feces Fossil, Stone Tools Found In Oregon Caves Dispel Theory About First Americans GRANTS PASS, Ore. -- Stone tools and human DNA from ancient caves in Oregon offer new evidence of how some of the first Americans spread through the continent: Quite apart from the better-known Clovis culture, a separate group occupied the West. Archaeologists said Thursday that using multiple techniques, they have dated broken obsidian spear points from Paisley Caves to about 13,200 years ago, as old as much different stone tools from the Clovis culture found in the southeast and interior United States. Radio-carbon dating of human DNA from coprolites – ancient desiccated human feces – shows people lived in the caves as early as 14,300 years ago. The dates indicate that the Clovis style of chipping stone was not the mother of Stone Age technology, as others have theorized, and that the two styles were developed independently by different groups, said Dennis Jenkins, an archaeologist with the University of Oregon's Museum of Natural and Cultural History who led the excavations.

FUSAG: The Ghost Army of World War II In the final years of World War II, both the Allied and Axis Powers knew that there was no chance of defeating Hitler without cracking his grasp on Western Europe, and both sides knew that Northern France was the obvious target for an amphibious assault. The German high command assumed the Allies would cross from England to France at the narrowest part of the channel and land at Pas-de-Calais. The Allies instead set their sights some 200 miles to the west. The beaches of Normandy could be taken as they were, but if the Germans added to their defense by moving their reserve infantry and panzers to Normandy from their garrison in the Pas-de-Calais region, the invasion would be a disaster. (Edit 4/16: A reader pointed out that the original post was incorrect about the Germans' assumptions about the invasion site. This paragraph has been changed to correct that information. George and His Imaginary Friends When intelligence officers learned that the First U.S. General George S.

Why Some Civil War Soldiers Glowed in the Dark By the spring of 1862, a year into the American Civil War, Major General Ulysses S. Grant had pushed deep into Confederate territory along the Tennessee River. In early April, he was camped at Pittsburg Landing, near Shiloh, Tennessee, waiting for Maj. On the morning of April 6, Confederate troops based out of nearby Corinth, Mississippi, launched a surprise offensive against Grant’s troops, hoping to defeat them before the second army arrived. The Union troops began forcing the Confederates back, and while a counterattack stopped their advance it did not break their line. All told, the fighting at the Battle of Shiloh left more than 16,000 soldiers wounded and more 3,000 dead, and neither federal or Confederate medics were prepared for the carnage. The bullet and bayonet wounds were bad enough on their own, but soldiers of the era were also prone to infections. A Bright Spot “So you know, he comes home and, 'Mom, you're working with a glowing bacteria. And that’s just what Bill did.

Remembering Alan Turing Yep. Hence the name "bombe", which is not an English word. Joe Desch also led a simultaneous indedpendent effort in Dayton, Ohio, to build a bombe machine after the Germans added a fourth wheel to their enigma machine. Turing, however, was dismissive of the bombe effort at National Cash Register in Dayton, and thought it would never work. [www.daytondailynews.com] A lot of the guys who worked at the Dayton bombe project at National Cash Register eventually went to be founding members of the first real computer companies in the U.S., at places like Engineering Research Associates (now defunct) and IBM. I found out a year ago that my grandfather, who died in the 1970s, worked on the Dayton bombe.

The statues of Easter Island could have "walked" into place There've been various mechanisms proposed for moving the moai. Another suggested technique involved sliding them on a layer of small round rocks, and then raising them upright by piling small rocks underneath them, lifting them a little, piling more rocks under them, and so on. This always seemed plausible to me as - having hiked across Easter Island - I can confirm that the island has an abundant supply of small round rocks. I'm not sure that all the moai have the long-bodied form. It's quite possible that there were not only different designs, but different techniques for moving them. Incidentally, many of them also had stylish red 'hats' made out of a different stone.

Rediscovering Central Asia by S. Frederick Starr In AD 998, two young men living nearly 200 miles apart, in present-day Uzbekistan and Turkmenistan, entered into a correspondence. With verbal jousting that would not sound out of place in a 21st-century laboratory, they debated 18 questions, several of which resonate strongly even today. Are there other solar systems out among the stars, they asked, or are we alone in the universe? In Europe, this question was to remain open for another 500 years, but to these two men it seemed clear that we are not alone. They also asked if the earth had been created whole and complete, or if it had evolved over time. Few exchanges in the history of science have so boldly leapt into the future as this one, which occurred a thousand years ago in a region now regarded as a backwater. Most today know these argumentative geniuses, if at all, as Arabs. Today, this is hard to imagine. Given the dismal plight of these lands in the modern era, who can be surprised at this? And glorious it was.

The Great Wall of China is a lot Greater than we thought I believe you misunderstood the article. They aren't counting "every border fortification". They're counting fortifications that ran the length of, or parallel to, the Great Wall - structures that were once part of it that have since deteriorated. If you argue that "well, two walls parallel to each other aren't the same wall", you would be right. Similar to our (the USA's) border. Cheers! Our ancestors may have originated in Asia, not Africa Well, this at least confirms the spread of hominids in Eurasia. My favorite Atlantis theory involves the Indonesian sub-continent of the ice-age pre-melt era. Perhaps latter evolution and early civilization started there? Indeed, the evidence is highly circumstantial. In fact, the only reason I have any interest in such a 'theory' is that it represents a rising metaphysical awareness on the part of humanity. You have the pharaohs and their ilk in Mesopotamia, Canaan, Scythia, the Indus, the African Savannah, and even (so it appears) in S. and C. This myth of the golden land is very distinct: tropical, full of fruits and abundant mineral wealth, but also the land of the dead (like, where there was once civilization - think smoking sea Valyria), and also the land at the edge of the world where the sun is born. Take one fact and flip it around: Man came out of Africa to build civilization.

Researchers uncover 8,000 years of human history hidden in the Middle East Which would be interesting, seeing as, when interpreted literally, the Bible also claims that the universe was created between 6000-8000 years ago. Which is problematic, to say the least. EDIT: Not to mention the mental gymnastics required to reconcile the (presumably) carbon dating of the earliest Mesopotamian settlements to 8000 years ago and the fact that that same dating methods go on to describe artifacts and fossils that are up to 40 000 years old. As I recall, Asimov hypothesized that the age of creation used in the Bible is actually linked to the point at which we (or rather Near Eastern peoples) began recording history in the form of writing. That's always been the same assumption that I have made. Population growth: Ban homosexuality. Sanitary living conditions: Explain sources of clean water, and to cook meat, but not eat some meat. Etc.