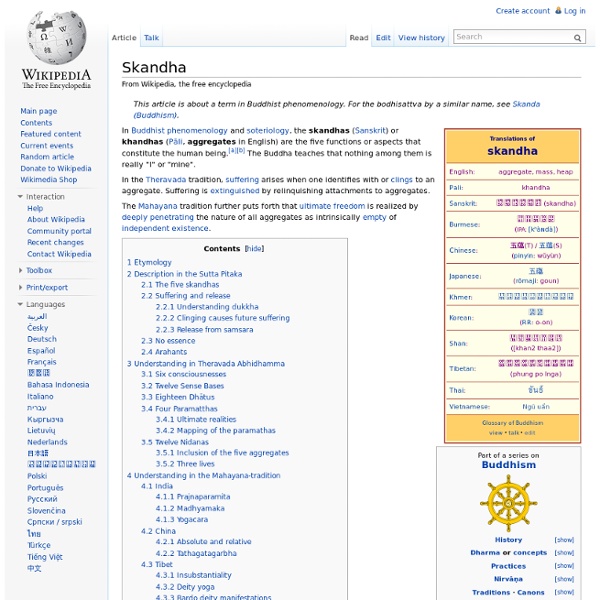 In the Theravada tradition, suffering arises when one identifies with or clings to an aggregate. Suffering is extinguished by relinquishing attachments to aggregates. The Mahayana tradition further puts forth that ultimate freedom is realized by deeply penetrating the nature of all aggregates as intrinsically empty of independent existence. Etymology[edit] Outside of Buddhist didactic contexts, "skandha" can mean mass, heap, pile, gathering, bundle or tree trunk.[3][c] According to Thanissaro, the buddha gave a new meaning to the term "khanda": Prior to the Buddha, the Pali word khandha had very ordinary meanings: A khandha could be a pile, a bundle, a heap, a mass. Description in the Sutta Pitaka[edit] The Sutta Pitaka of the Pali Canon contains the teachings of the Buddha, as preserved by the Theravada tradition. The five skandhas[edit] The sutras describe five aggregates:[d] Suffering and release[edit] Understanding dukkha[edit] Clinging causes future suffering[edit] ... No essence[edit] Related:  wikipedia

Six Yogas of Naropa The Six Yogas of Nāropa (Tib. Narö chö druk, na-ro'i-chos-drug), also called the six dharmas of Naropa.[1] Naro's six doctrines (Mandarin: Ming Xing Dao Liu Cheng Jiu Fa; rendered in English as: Wisdom Activities Path Six Methods of Accomplishment),[2] are a set of advanced Indo-Tibetan Buddhist tantric practices and a meditation sādhana compiled in and around the time of the Indian monk and mystic Nāropa (1016-1100 CE) and conveyed to his student Marpa the translator. The six yogas were intended in part to help in the attainment of siddhi and enlightenment in an accelerated manner. Six Yogas or Six Dharmas?[edit] Peter Alan Roberts notes that the proper terminology is "six Dharmas of Nāropa", not "six yogas of Nāropa": "Tilopa briefly described these six practices in a short verse text entitled Instructions on the Six Dharmas. Classification[edit] The six Dharmas are a synthesis or collection of the completion stage practices of several tantras. The six yogas[edit] Physical exercises[edit]

Rebirth (Buddhism) Within one life and across multiple lives, the empirical, changing self not only objectively affects its surrounding external world, but also generates (consciously and unconsciously) its own subjective image of this world, which it then lives in as 'reality'. It lives in a world of its own making in various ways. It "tunes in" to a particular level of consciousness (by meditation or the rebirth it attains through its karma) which has a particular range of objects - a world - available to it. It furthermore selectively notices from among such objects, and then processes what has been sensed to form a distorted interpretive model of reality: a model in which the 'I am' conceit is a crucial reference point. The Buddha lived at a time of great philosophical creativity in India when many conceptions of the nature of life and death were proposed. There are many references to rebirth in the early Buddhist scriptures. Buddhist meditation teachers suggest [references?] BuddhaNet

Samaññaphala Sutta The Samaññaphala Sutta is the second discourse (Pali, sutta; Skt., sutra) of all 34 Digha Nikaya discourses. The title means, "The Fruit of Contemplative Life Discourse." In terms of narrative, this discourse tells the story of King Ajatasattu, son and successor of King Bimbisara of Magadha, who posed the following question to many leading Indian spiritual teachers: What is the benefit of living a contemplative life? After being dissatisfied with the answers provided by these other teachers, the king posed this question to the Buddha whose answer motivated the king to become a lay follower of the Buddha. In terms of Indian philosophy and spiritual doctrines, this discourse: Thanissaro (1997) refers to this discourse as "one of the masterpieces of the Pali canon The king's unrest[edit] The King immediately agreed to go there. To answer his majesty's paranoia, the physician calmly reassured the monarch, "Do not worry, your Majesty. The King then approached the Buddha and gave his salutation.

Reality in Buddhism Reality in Buddhism is called dharma (Sanskrit) or dhamma (Pali). This word, which is foundational to the conceptual frameworks of the Indian religions, refers in Buddhism to the system of natural laws which constitute the natural order of things. Dharma is therefore reality as-it-is (yatha-bhuta). The teaching of the Buddha constituting as it does a method by which people can come out of their condition of suffering (dukkha) involves developing an awareness of reality (see mindfulness). Buddhism thus seeks to address any disparity between a person's view of reality and the actual state of things. Buddhism addresses deeply philosophical questions regarding the nature of reality. One of the most discussed themes in Buddhism is that of the emptiness (sunyata) of form (matter), an important corollary of the transient and conditioned nature of phenomena. Some consider that the concept of the unreality of "reality" is confusing. Reality in Buddhist sutras[edit] "What is the Real (tattva)?

Kundalini Kundalini chakra diagram Kundalini (Sanskrit kuṇḍalinī, कुण्डलिनी, pronunciation ) stems from yogic philosophy as a form of feminine shakti or "corporeal energy".[1] Kundalini is described within Eastern religious, or spiritual, tradition as an indwelling spiritual energy that can be awakened in order to purify the subtle system and ultimately to bestow the state of Yoga, or Divine Union, upon the 'seeker' of truth ".[2][3] The Yoga Upanishads describe Kundalini as lying "coiled" at the base of the spine, represented as either a goddess or sleeping serpent waiting to be awakened. In modern commentaries, Kundalini has been called an unconscious, instinctive or libidinal force.[1][4][5] It is reported that Kundalini awakening results in deep meditation, enlightenment and bliss.[6] This awakening involves the Kundalini physically moving up the central channel to reside within the Sahasrara Chakra above the head. Etymology[edit] The Sanskrit adjective kuṇḍalin means "circular, annular". and

Vipassanā Vipassanā (Pāli) or vipaśyanā (विपश्यना, Sanskrit; Chn. 觀 guān; Tib. ལྷག་མཐོང་, lhaktong; Wyl. lhag mthong) in the Buddhist tradition means insight into the true nature of reality.[1][2] In the Theravadin context, this entails insight into the three marks of existence - (1) the impermanence of and (2) the unsatisfactoriness of every conditioned thing that exists, and (3) non-self. In Mahayana contexts, it entails insight into what is variously described as sunyata, dharmata, the inseparability of appearance and emptiness (two truths doctrine), clarity and emptiness, or bliss and emptiness.[3] Vipassanā is commonly used as a synonym for vipassanā-meditation, in which satipatthana, four foundations of mindfulness or anapanasati, "mindfulness of breathing," is used to become aware of the impermanence of everything that exists. Samatha is a focusing, pacifying, and calming meditation common to many traditions in the world, notably yoga. Etymology[edit] Henepola Gunaratana defined Vipassanā as:

Satipatthana Sutta "This is the direct way [Pāli: ekāyano ... maggo],[4] monks, for the purification of beings, for the overcoming of sorrow and lamentation, for the extinguishing of suffering and grief, for walking on the path of truth, for the realization of nibbāna...." (Vipassana Research Institute, 1996, pp. 2, 3.) The meditation techniques identified in this sutta can be practiced individually or successively or in an interwoven fashion. Text[edit] Title translation and related literature[edit] English translations of the title, "Satipaṭṭhāna Sutta," include: "The Arousing of Mindfulness Discourse" (Soma, 1999)"The Foundations of Mindfulness Discourse" (Nyanasatta, 1994)"The Frames of Reference Discourse" (Thanissaro, 1995) According to Anālayo (2006, pp. 29–30), Thanissaro (2000) and Nyanaponika (1996, pp. 9–10), part of the reason for the variety in this title's translation has to do with how the compound Pāli word "satipaṭṭhāna" is analyzed. Various Recensions & Canonical placement[edit] Contents[edit]

Abhijna The Buddha demonstrating control over the fire and water elements. Gandhara, 3rd century CE Abhijñā (Skt., Pali, abhiññā; Tib., mngon shes, མངོན་ཤེས་) has been translated generally as "knowing,"[1] "direct knowing"[2] and "direct knowledge"[3] or, at times more technically, as "higher knowledge"[1][4] and "supernormal knowledge Pali literature[edit] In Pali literature, abhiññā refers to both the direct apprehension of dhamma (translated below as "states" and "qualities") as well as to specialized super-normal capabilities. Direct knowing of dhamma[edit] In SN 45.159, the Buddha describes "higher knowledge" (abhiññā) as a corollary to the pursuit of the Noble Eightfold Path:[4] What, monks, are the states to be comprehended with higher knowledge? Such direct knowledge, according to the Buddha, is obscured by desire and passion (chanda-rāga):[6] Monks, any desire-passion with regard to the eye is a defilement of the mind. Enumerations of special knowledges[edit] Parallels in other cultures[edit]

U Dhammaloka In this Burmese name, U is an honorific. U Dhammaloka (Burmese: ဦးဓမ္မလောက; c. 1856 – c. 1914) was an Irish-born hobo (migrant worker)[1] turned Buddhist monk, atheist critic of Christian missionaries, and temperance campaigner who took an active role in the Asian Buddhist revival around the turn of the twentieth century. Dhammaloka was ordained in Burma prior to 1900, making him one of the earliest attested western Buddhist monks. Buddhist Tract Society stationery. Early life[edit] Dhammaloka's early life and given name are as yet uncertain. Burmese career[edit] In Burma, he found work in Rangoon as a tally clerk in a logging firm before becoming interested in the Burmese Buddhism he saw practised all around him. British forces enter Mandalay in 1885 marking the final conquest of Burma. After some years' absence Dhammaloka returned to Burma in 1907, establishing the Buddhist Tract Society (see below). Other Asian projects and travels[edit] Singapore[edit] Japan[edit] Siam[edit] Notes[edit]

Vijñāna Vijñāna (Sanskrit; Devanagari: विज्ञान) or viññāṇa (Pāli; Devanagari: विञ्ञाण)[1] is translated as "consciousness," "life force," "mind,"[2] or "discernment."[3] Buddhism[edit] This section considers the Buddhist concept primarily in terms of Early Buddhism's Pali literature as well as in the literature of other Buddhist schools. Pali literature[edit] Throughout Pali literature, viññāṇa[1] can be found as one of a handful of synonyms for the mental force that animates the otherwise inert material body.[6] In a number of Pali texts though, the term has a more nuanced and context-specific (or "technical") meaning. (1) as a derivative of the sense bases (āyatana), part of the experientially exhaustive "All" (sabba); (2) as one of the five aggregates (khandha) of clinging (upadana) at the root of suffering (dukkha); and, Sense-base derivative[edit] Hence, in this context, viññāṇa includes the following characteristics: The aggregates[edit] "And why do you call it 'consciousness'? "... "No, lord."