Science Timeline Marks in the evolution of science. 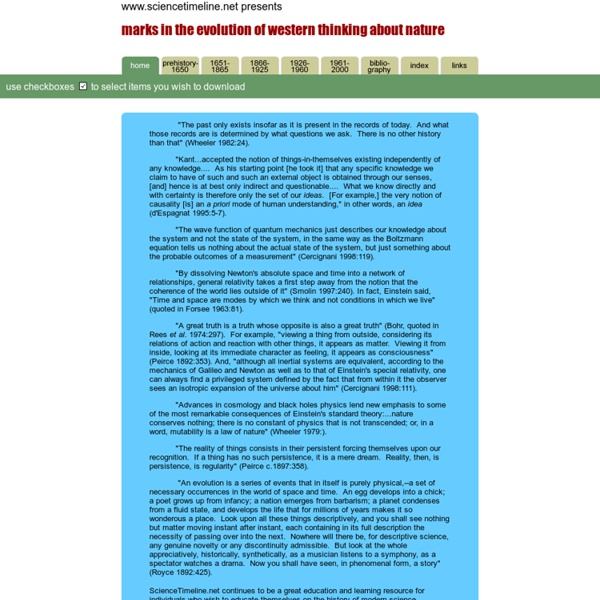 A History of the World - Location - Europe ChronoZoom ChronoZoom is an educational tool for teachers and students who want to put historical events in perspective. A great many resources have been created already in ChronoZoom for your enjoyment and enlightenment. Start Exploring Use ChronoZoom to get a perspective of the extensive scale of time and historical events relative to what happened around the world. New Teacher Resources RT @MSFTResearch: See how #Chronozoom helps students “think historically” & travel though time with 3 newly created curriculum modules http… #chronozoom is a valuable tool for illustrating Climate Change: @metanexus Anyone can author their small or Big History on the 14 Billion year timeline at - an open source project. @BillGates Congratulations to the Big History Project. RT @BillGates: Big History is my favorite course ever. You don't have any favorite timelines yet.

Big History Project (bh_p) sur Twitter World War I Timeline Timelines are one of our favorite history tools and an important element of the Layers of Learning curriculum. Here are some WWI events to add to a timeline. You may find more from your reading. You can put the timeline squares on a wall or in a notebook. And here is the set of printable World War I Timeline squares. A Little History Also known as the Great War and the War to End All Wars (sure wish that had worked out), the First World War changed everything. It had absolutely nothing to do with America, yet America fought in it and emerged the world leader. This is a painting by artists Wilie Stower of the Battle of Dogger Bank, 1915. WWI started because of European leaders’ posturing for power. On the Web I found a whole series of great printable resources for World War I here. And here is an excellent animated map of the Western Front from the BBC. This is a map of the Western Front in 1914. Library List from DK , World War I: A Primary Source History , Going to War in World War I by L.M.

A Longer Topic Index Draft | ASA Homeschool Science Resources In the last post, Drafting a subject-topic index, I presented a heavily pruned draft of a subject-topic index. In this post I provide a longer, unpruned version. I believe our goal is to arrive at a list that is somewhere in between these two extremes. This index came from several sources. First topics were found from syllabuses and curricula. State standards were were briefly examined. I worked on the list as an outline. The subjects of ‘Technology and Applied Science’, ‘Science as Study’, ‘Science and Christianity’ have not been repeated for this post. Some of these levels are more natural than others. I could use feedback. –Patrick The Outline Astronomy The Cosmos Galaxies and Stars The Solar System Discovery and exploration Sun Planets (Inner planets and Outer planets) * Mercury * Venus * Mars * Jupiter * Saturn * Uranus * Neptune Asteroid belt Dwarf Planets Comets Kuiper belt Earth Science Earth’s Properties, Structure, Composition Seasons Solar intensity Latitude The Earth’s surface Physics

RESCU | 5E Lessons Annenberg Media Exhibits: Collapse Hundreds of years ago in what is now modern Honduras, Copán was a thriving civilization, a center of the cultural life of the Maya. Tens of thousands of people made their home in the Copán Valley. Yet despite its importance, Copán went into decline. Across the vast territory of the ancient Maya, other important sites were sharing a similar fate. Why did this great civilization fall? can combine with external causes (such as war or natural disaster) to bring about a collapse. Join us as we explore the collapse of four ancient civilizations. Ready to get started? "Collapse" is inspired by programs from Out of the Past, a video series from Annenberg Media.