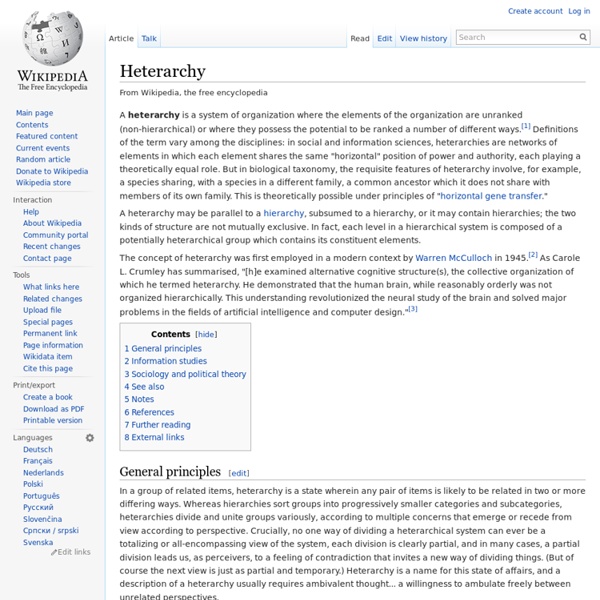 A heterarchy is a system of organization where the elements of the organization are unranked (non-hierarchical) or where they possess the potential to be ranked a number of different ways.[1] Definitions of the term vary among the disciplines: in social and information sciences, heterarchies are networks of elements in which each element shares the same "horizontal" position of power and authority, each playing a theoretically equal role. But in biological taxonomy, the requisite features of heterarchy involve, for example, a species sharing, with a species in a different family, a common ancestor which it does not share with members of its own family. This is theoretically possible under principles of "horizontal gene transfer." A heterarchy may be parallel to a hierarchy, subsumed to a hierarchy, or it may contain hierarchies; the two kinds of structure are not mutually exclusive. General principles[edit] Information studies[edit] Numerous observers[who?] David C. See also[edit] Related:  People and concepts

Simone Weil Simone Weil (French: [simɔn vɛj]; 3 February 1909 – 24 August 1943) was a French philosopher, Christian mystic, and political activist. Weil's life was marked by an exceptional compassion for the suffering of others; at the age of six, for instance, she refused to eat sugar after she heard that soldiers fighting in World War I had to go without. She died from tuberculosis during World War II, possibly exacerbated by malnutrition after refusing to eat more than the minimal rations that she believed were available to soldiers at the time. Taking a path that was unusual among twentieth-century left-leaning intellectuals, she became more religious and inclined towards mysticism as her life progressed. Weil wrote throughout her life, though most of her writings did not attract much attention until after her death. In the 1950s and 1960s, her work became famous on continental Europe and throughout the English-speaking world. Biography[edit] Simone Weil at age 13. Early life[edit] Leon Trotsky.

Happy Birthday, Brain Pickings: 7 Things I Learned in 7 Years of Reading, Writing, and Living by Maria Popova Reflections on how to keep the center solid as you continue to evolve. UPDATE: The fine folks of Holstee have turned these seven learnings into a gorgeous letterpress poster inspired by mid-century children’s book illustration. On October 23, 2006, I sent a short email to a few friends at work — one of the four jobs I held while paying my way through college — with the subject line “brain pickings,” announcing my intention to start a weekly digest featuring five stimulating things to learn about each week, from a breakthrough in neuroscience to a timeless piece of poetry. “It should take no more than 4 minutes (hopefully much less) to read,” I promised. This was the inception of Brain Pickings. Illustration by Maurice Sendak from 'I'll Be You and You Be Me' by Ruth Krauss, 1954. Illustration from 'Inside the Rainbow: Russian Children's Literature 1920-35.' Allow yourself the uncomfortable luxury of changing your mind. Donating = Loving Share on Tumblr

Introduction to Political Philosophy About the Course This course is intended as an introduction to political philosophy as seen through an examination of some of the major texts and thinkers of the Western political tradition. Three broad themes that are central to understanding political life are focused upon: the polis experience (Plato, Aristotle), the sovereign state (Machiavelli, Hobbes), constitutional government (Locke), and democracy (Rousseau, Tocqueville). The way in which different political philosophies have given expression to various forms of political institutions and our ways of life are examined throughout the course. View class sessions » Course Structure This Yale College course, taught on campus twice per week for 50 minutes, was videotaped for Open Yale Courses in Fall 2006. The Open Yale Courses Series For more information about Professor Smith’s book Political Philosophy, click here. Course Materials Download all course pages [zip - 10MB] Video and audio elements from this course are also available on: Texts

Exploring Anarchism and Taoism Anarchism is usually considered a recent, Western phenomenon, but its roots reach deep in the ancient civilizations of the East. The first clear expression of an anarchist sensibility may be traced back to the Taoists in ancient China from about the sixth century BC. Indeed, the principal Taoist work, the Tao te ching, may be considered one of the greatest anarchist classics. The Taoists at the time were living in a feudal society in which law was becoming codified and government increasingly centralized and bureaucratic. The Taoists and the Confucians were both embedded in ancient Chinese culture. But whereas the Taoists were principally interested in nature and identified with it, the Confucians were more worldly- minded and concerned with reforming society. Although it has helped shape Chinese culture as much as Buddhism and Confucianism, Taoism by its very nature never became an official cult. The principal exponent of Taoism is taken to be Lao Tzu, meaning ‘old Philosopher’.

Anarchism and Other Essays: Anarchism: What It Really Stands For THE history of human growth and development is at the same time the history of the terrible struggle of every new idea heralding the approach of a brighter dawn. In its tenacious hold on tradition, the Old has never hesitated to make use of the foulest and cruelest means to stay the advent of the New, in whatever form or period the latter may have asserted itself. Nor need we retrace our steps into the distant past to realize the enormity of opposition, difficulties, and hardships placed in the path of every progressive idea. The rack, the thumbscrew, and the knout are still with us; so are the convict's garb and the social wrath, all conspiring against the spirit that is serenely marching on. Anarchism could not hope to escape the fate of all other ideas of innovation. To deal even remotely with all that is being said and done against Anarchism would necessitate the writing of a whole volume. What, then, are the objections? Destruction and violence! But what about human nature?

Pierre-Joseph Proudhon Proudhon, who was born in Besançon, was a printer who taught himself Latin in order to better print books in the language. His best-known assertion is that Property is Theft!, contained in his first major work, What is Property? Or, an Inquiry into the Principle of Right and Government (Qu'est-ce que la propriété? Recherche sur le principe du droit et du gouvernement), published in 1840. Proudhon favored workers' associations or co-operatives, as well as individual worker/peasant possession, over private ownership or the nationalization of land and workplaces. Biography Early life and education Proudhon was born in Besançon, France on February 15, 1809, at 37 Rue du Petit Battant in the suburb of Battant.[6] His father, Claude-François Proudhon who worked as a brewer and a cooper,[7] was originally from the village of Chasnans, near the border with Switzerland. Entrance into the printing trade Over the years, Proudhon rose to be a corrector for the press, proofreading their publications.

Francesc Ferrer i Guàrdia Francesc Ferrer i Guàrdia (10 January 1859 – 13 October 1909)[1] (known as Francisco Ferrer y Guardia in Spanish and often simply as Francisco Ferrer) was a Spanish anarchist. Life[edit] He was born in Alella (a small town near Barcelona) to Roman Catholic parents. He was sent to work on a Barcelona firm at the age of 15. The owner of the firm was an anti-cleric and is said to have had a great influence on Ferrer. In 1901 he returned to Spain and opened the Escuela Moderna (The Modern School) to teach middle-class children (then) radical social values. Early in the summer of 1908, after his release from jail, he wrote the story of the Modern School. References[edit] External links[edit]

William Godwin Early life and education[edit] He then acted as a minister at Ware, Stowmarket and Beaconsfield. At Stowmarket the teachings of the French philosophers were brought before him by a friend, Joseph Fawcett, who held strong republican opinions. Early writing[edit] His first published work was an anonymous Life of Lord Chatham (1783). Enquiry Concerning Political Justice and Caleb Williams[edit] Godwin augmented the influence of Political Justice with the publication of a novel that proved equally popular, Things as They Are; or, The Adventures of Caleb Williams. Political writing[edit] Godwin, consistent in his theory and stubborn in his practice, practically lived in secret for 30 years because of his reputation. Interpretation of political justice[edit] By the words "political justice" the author meant "the adoption of any principle of morality and truth into the practice of a community," and the work was therefore an inquiry into the principles of society, government and morals.

Anarchism The central tendency of anarchism as a social movement has been represented by anarcho-communism and anarcho-syndicalism, with individualist anarchism being primarily a literary phenomenon[25] which nevertheless did have an impact on the bigger currents[26] and individualists have also participated in large anarchist organisations.[27][28] Many anarchists oppose all forms of aggression, supporting self-defense or non-violence (anarcho-pacifism),[29][30] while others have supported the use of some coercive measures, including violent revolution and propaganda of the deed, on the path to an anarchist society.[31] Etymology and terminology[edit] The term anarchism is a compound word composed from the word anarchy and the suffix -ism,[32] themselves derived respectively from the Greek ἀναρχία, i.e. anarchy[33][34][35] (from ἄναρχος, anarchos, meaning "one without rulers";[36] from the privative prefix ἀν- (an-, i.e. "without") + ἀρχός, archos, i.e. History[edit] Origins[edit]

Liberalism & Conservatism Dr. Jim L. Riley Regis University Denver, CO Moderate Ideologies along with moderate political viewpoints may be correctly seen as occupying positions between the more extreme wings of the spectrum. Change is inevitable in society, in governmental arrangements and relationships, in leadership, in public policies and throughout the political world. Liberalism Liberalism has occupied an important position in the moderate varieties of political ideologies for well over two centuries. The first glimmerings of liberalism may be discovered in the expansive political role being sought by increasingly large numbers of individuals and, more significantly, discreet groups of people with identifiable common interests. Certainly it was John Locke (1632-1704) who best expressed the principles of Liberalism in the British (and American) tradition. The basic duty of government is to protect the common good and private rights which were seen to be inextricably related if not the same thing. Conservatism