Amazon as a graph 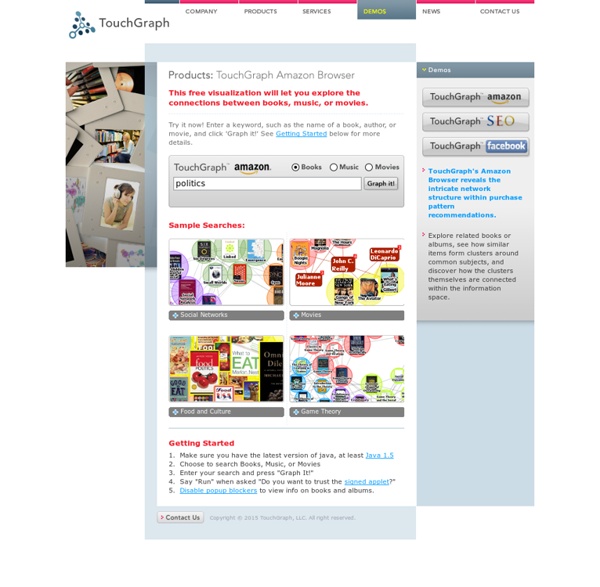 The Rise of Visual Browsing This time last year at the annual TED conference, Microsoft Live Labs demoed an immersive media-browsing tool that literally caused gasps in the audience. Seadragon/Photosynth is exactly the kind of ’3-D web’ experience people were hyping in the late 1990s, along with VRML (Virtual Reality Modeling Language), as though they were poised to go mainstream. Instead, many users rejected the over-use of tools like Flash, while Google’s simple text-based results became the gold standard. Discussion of ‘visual browsing’ has heated up again, though. Cover Flow In late 2004, Andrew Enright first designed a visual browsing method which later became Apple’s Cover Flow. Enright was nostalgic for flipping through the used bins at record stores and mentally cataloging the albums based on cover art: Images have the ability to convey a lot of information very quickly. SnapShots Do a search for “Snap + annoying” to see what people are saying about these screenshot previews, found on many WordPress.com blogs.

Google Touchgraph Use this free Java application to explore the connections between related websites. Try it now! Enter keywords or a URL, and click 'Graph it!' See Getting Started below for more details. Getting Started Make sure you have the latest version of java, at least Java 1.5 Type in your search keywords or a URL, and press "Graph It!" Sample Searches: Data Visualization Software | Tulip Search Features In addition to providing easy access to billions of web pages, Google has many special features to help you find exactly what you're looking for. Some of our most popular features are listed below. Everyday Essentials Weather To see the weather for many UK and worldwide cities, type "weather" followed by the name of the city or postcode. Stock Quotes To see current market data for a given company or fund, type the ticker symbol into the search box. Time To see the time in many cities around the world, type "time" and the name of the city. Sports Scores To see scores and schedules for sports teams, type the team name or league name into the search box. Back to top Reference Tools Calculator To use Google's built-in calculator function, simply enter the calculation that you'd like done into the search box. Book Search Unit Conversion You can use Google to convert between many different units of measurement of height, weight and mass among others. Choosing Keywords Synonym Search Dictionary Definitions

Xiaoji Chen's Design Weblog » Power Chart of Chinese Provinces Economist just posts an interactive visualization Chinese Equivalents on their website. It’s a very interesting approach. (Somehow I feel it has an psychological side-effect by saying one province is equivalent to France while it’s neighbor is equivalent to Kenya, though noted in terms of population.) I got curious how we can visualize how actually important the Chinese provinces are. Newman’s code on his website deals with raster image only. You can recognize in this map how unbalanced China is – the west is barely occupied due to challenging natural environment, and population keeps flowing from the middle towards the economic centers (Beijing and the southeast coast). What about looking at the provinces from a social network’s perspective? Tools used: Processing, Tulip, Illustrator Similar Posts

Internet Archive historical webpage search Health InfoScape When you have heartburn, do you also feel nauseous? Or if you're experiencing insomnia, do you tend to put on a few pounds, or more? By combing through 7.2 million of our electronic medical records, we have created a disease network to help illustrate relationships between various conditions and how common those connections are. Take a look by condition or condition category and gender to uncover interesting associations. About this data The information used for this visualization is based on 7.2 million patient records from GE's proprietary database, and represents some of the conditions that commonly affect Americans today. Share Downloads Download Application Design Partner MIT SENSEable City Lab

Xiaoji Chen's Design Weblog » Health Infoscape Senseable City Lab partnered with GE to create new ways of understanding human health. Our team created a disease network by analyzing data from over 7.2 million anonymized electronic medical records, taken from between January 2005 and July 2010, across the United States. Barabasi’s lab has published their disease networks generated by genetic similarity in 2007. In our first attempt, diseases/disorders are considered associated if a patient has got them at the same time or sequentially. The resulting network gives us new insight as to how closely connected some seemingly un-related health conditions might be. Such results force us to re-examine conventional categories of disease classification, as the boundaries between traditional disease categories are thoroughly blurred. I made this interactive map for the general public to browse the data. It is a huge network. The network vis was made with Flex and the visualization library Flare, and the user interface with Flash CS4.