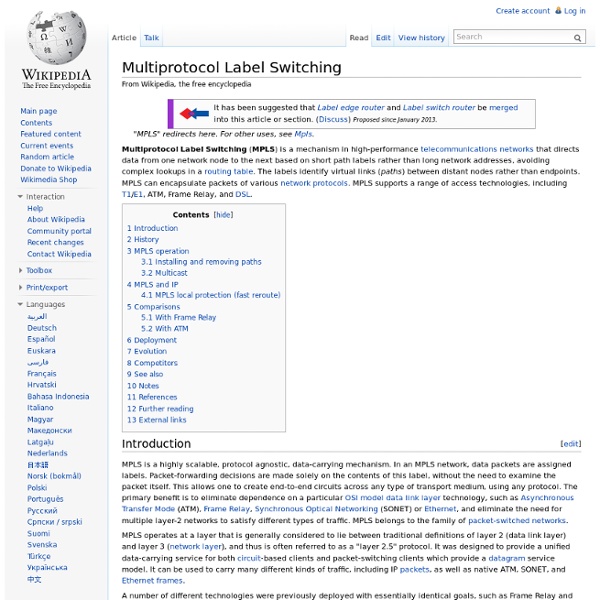 Multiprotocol Label Switching (MPLS) is a mechanism in high-performance telecommunications networks that directs data from one network node to the next based on short path labels rather than long network addresses, avoiding complex lookups in a routing table. The labels identify virtual links (paths) between distant nodes rather than endpoints. MPLS can encapsulate packets of various network protocols. MPLS supports a range of access technologies, including T1/E1, ATM, Frame Relay, and DSL. Introduction[edit] MPLS is a scalable, protocol-independent transport. In particular, MPLS dispenses with the cell-switching and signaling-protocol baggage of ATM. At the same time, MPLS attempts to preserve the traffic engineering and out-of-band control that made Frame Relay and ATM attractive for deploying large-scale networks. History[edit] MPLS operation[edit] A 20-bit label value. These MPLS-labeled packets are switched after a label lookup/switch instead of a lookup into the IP table.

MPLS :: Frequently Asked Questions What is MPLS VPN ? MPLS stands for "Multi-Protocol Label Switching" packet-switching VPN technology. After MPLS VPN is used, incoming data packets are assigned a "label" by a "label edge router (LER)". What is MPLS-based IP VPN? It is a IP VPN deploying MPLS technology to mark, classify, and monitor IP packets. a. MPLS stands for "Multiprotocol Label Switching". What is the fault Escalation Mechanism for MPLS VPN ? BSNL having a pro-active fault escalation mechanism .MPLS Network Operation Centre(NOC) is monitor the circuit round the clock 24 X 7. What security performance is provided by MPLS IP VPN service? With MPLS packet labeling method, which is similar to the processing of labels used in Frame Relay and ATM, security level of MPLS IP VPN service is compatible with ATM or FR security level. What is difference between IP Routing and MPLS VPN Routing ? b. d. Most MPLS standards are currently in the "Internet Draft" phase, though several have now moved into the RFC-STD phase. b. a. c.

MPLS - The Internet Protocol Journal - Volume 4, Number 3 Multiprotocol Label Switching (MPLS) is a promising effort to provide the kind of traffic management and connection-oriented Quality of Service (QoS) support found in Asynchronous Transfer Mode (ATM) networks, to speed up the IP packet-forwarding process, and to retain the flexibility of an IP-based networking approach. The roots of MPLS go back to numerous efforts in the mid-1990s to combine IP and ATM technologies. The first such effort to reach the marketplace was IP switching, developed by Ipsilon. To compete with this offering, numerous other companies announced their own products, notably Cisco Systems (Tag Switching), IBM (aggregate routebased IP switching), and Cascade (IP Navigator). In response to these proprietary initiatives, the Internet Engineering Task Force (IETF) set up the MPLS working group in 1997 to develop a common, standardized approach. The working group issued its first set of Proposed Standards in 2001. Nevertheless, MPLS has a strong role to play.