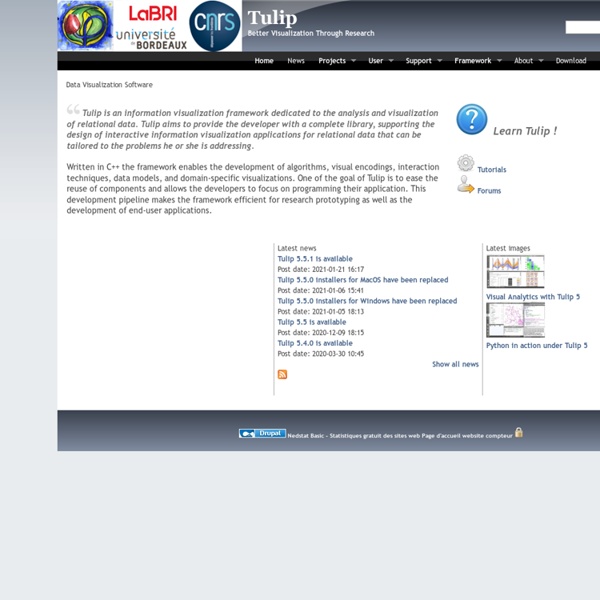 40 Useful and Creative Infographics Six Revisions Menu Main Categories CSS HTML JavaScript Web Design WordPress Web Development Walrus - Graph Visualization Tool Source Code Available The source code to Walrus is now available under the GNU GPL. You may download the source code below. Description Walrus is a tool for interactively visualizing large directed graphs in three-dimensional space. Xiaoji Chen's Design Weblog » Power Chart of Chinese Provinces Economist just posts an interactive visualization Chinese Equivalents on their website. It’s a very interesting approach. (Somehow I feel it has an psychological side-effect by saying one province is equivalent to France while it’s neighbor is equivalent to Kenya, though noted in terms of population.) I got curious how we can visualize how actually important the Chinese provinces are. I was reading Gastner & Newman’s paper Diffusion-based method for producing density-equalizing maps (PNAS 2004) at the time. So I set out to make my first density-equalizing map.

A little bit of this, a little bit of that I recently decided to create a visualization of my co-author network. I believed that this was a fairly easy task and expected to find a single, very simple tool and instructions for it online. However, much to my chagrin, this process took much longer than I expected. Below are the steps I figured out after some trial and error: Co-authorship network map of physicians publishing on hepatitis C (Photo credit: speedoflife) 1.

Enterprise Software Doesn't Have to Suck: Social Network Analysis using R and Gephis After learning the basics of R, I decided to learn something harder last week. I picked Social Network Analysis (SNA) to learn the concepts of SNA and R. My primary interest in SNA is visual exploration of networks, so I needed to find a tool first. Which tool to use for visual SNA? Math algorithm tracks crime, rumours, epidemics to source (Phys.org) -- A team of EPFL scientists has developed an algorithm that can identify the source of an epidemic or information circulating within a network, a method that could also be used to help with criminal investigations. Investigators are well aware of how difficult it is to trace an unlawful act to its source. The job was arguably easier with old, Mafia-style criminal organizations, as their hierarchical structures more or less resembled predictable family trees. In the Internet age, however, the networks used by organized criminals have changed. Innumerable nodes and connections escalate the complexity of these networks, making it ever more difficult to root out the guilty party. EPFL researcher Pedro Pinto of the Audiovisual Communications Laboratory and his colleagues have developed an algorithm that could become a valuable ally for investigators, criminal or otherwise, as long as a network is involved.

SoNIA - Social Network Image Animator Social Network Image Animator What is it? SoNIA is a Java-based package for visualizing dynamic or longitudinal "network" data. Health InfoScape When you have heartburn, do you also feel nauseous? Or if you're experiencing insomnia, do you tend to put on a few pounds, or more? By combing through 7.2 million of our electronic medical records, we have created a disease network to help illustrate relationships between various conditions and how common those connections are.