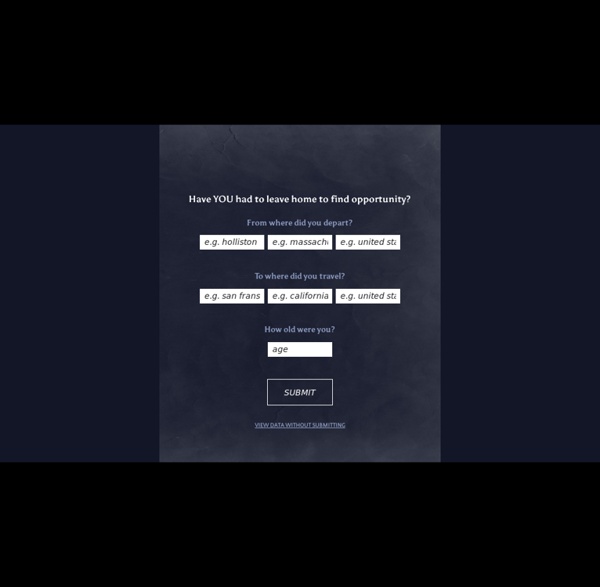 Filmmakers Collaborative FC offers low cost fiscal sponsorship to independent producers across the country. Many foundations will not issue grants to individuals but only to non-profits, so instead of starting their own 501(c)3 organization, filmmakers often align themselves with an established non-profit, allowing them to apply for a wide range of grants and offer their donors a tax deduction. FC is not simply a “pass through;” it is a member organization that accepts and administers contributions made to our members’ projects, monitors reports to ensure that grant funds are spent in accordance with funder requirements, and acts as the liaison between foundations and filmmakers.

Projects Skip to content Exploring documentary storytelling in the age of the interface Active Filter : None loading... LIVE FROM THE WEBZINE: Call for Entry: IDFA Bertha Fund Classic - 14 Apr » Out My Window Still image from recently found footage: An uncle’s self-documentation 20 years ago with a super 8 film camera in a Toronto highrise. This remarkable footage is providing clues for Maria-Saroja Ponnambalam, HIGHRISE community media coordinator, in her documentary about the mysteries of her uncle’s immigration to Canada, and his struggle with mental health issues. I asked Maria to guest blog about how she found the footage, her uncle, and how it unexpectedly relates to HIGHRISE. My father was convinced he had no films of his brother Pandi. While I was interviewing him on camera, he insisted on showing a box with a super-8 projector in it that belonged to Pandi. He had barely put his hand inside the box when he came across a smaller box, with a roll of developed film inside!

Home Appliance Energy Use In the United States, over 20% of our total energy consumption is residential. In fact, in the United States, we are the 7th largest per capita consumer of residential energy. Where is all of that energy going? Evaluating Interactive Documentaries: Audience, Impact and Innovation in Public Interest Media Public interest media organizations are increasingly interested in experimenting with interactive and participatory approaches to documentary storytelling enabled by digital technologies. However, due to the experimental nature of these interactive documentaries, it is not yet clear whether the more active user engagements they require translate into outcomes like sustained attention, greater narrative comprehension, enhanced learning, empathy or civic engagement – never mind larger societal impacts like improved public discourse, behavior change or policy change. The shifting definitions and measures of complex, multi-­‐dimensional concepts like “engagement” and “impact” is a challenge for public interest media organizations migrating to digital platforms – particularly at a time when audience activities have become far more transparent and funders place greater emphasis on “data-­driven” impact measurement. Sean Flynn

Transmedia Services Rise of Pervasive Communications Today's most desirable target markets, Millennial young adults and Generation Z ‘tweens and teens, have come of age in a time of pervasive communications. As a result they are far more media savvy, interpersonally connected, and able to express themselves than any previous generation.

interactive - National Film Board of Canada At the NFB we like change. For 70 years we've experimented, innovated, and produced a legacy of technical and creative firsts in cinema, animation, and documentary. Think McLaren, Lipsett, Brittain, and Jutra; Stereoscopic 3d, VTR, and participatory media.

Our Team Creativity is making something out of nothing. It’s what we did with Red Six Media, and it’s what we enjoy doing for our clients.The Red Six appeal is growing in Baton Rouge and across the Gulf South. Get your popcorn ready. Award-Winning Newspaper Designs Advertisement Print and Web are different. Traditional layout techniques from print, particularly an advanced formatting, aren’t applicable to the Web as CSS doesn’t offer sophisticated instruments to design such layouts (e.g. text floating around an embedded image; some “floating” techniques provide such results, however they produce bloated source code just as well). At the same time the flexibility of the Web is hardly applicable to print as there is no way to customize a traditional periodical for reader’s convenience.

Montecarlo - Barcelona, Spain., Química visual. OFFICIAL PROFILE Montecarlo, born in Barcelona, Spain. BA in Fine Arts and MBA in Film and TV. Started his career as a comic-book author (writer & artist) and video maker. 9 Web Design Trends Set To Boom in 2014 Share on Twitter12Share on Facebook8Share on Google Plus2Share on Stumbleupon0Share on Reddit0 As we are now a month into 2014 we are starting to see some new trends emerging, some old fads evolving into fully blown mainstream design standards and some design fads dying a slow death. There are some significant changes taking hold in the web design world that I believe will take off this year and stay for years to come. It is notoriously hard to predict the next big trend or what will just be a passing fad but I am going to have a go and hopefully give you a heads up on growth areas that will bring in more clients and improve your hourly rate over the coming year. So, here are a few of my fearless web design forecasts: Scrolling Effects Go Mainstream

Transmedia Journalism Principles Jump to: Previous Page: “Where Journalism Has Gone Before”Spreadable | DrillableContinuous and SerialDiverse and Personal in ViewpointImmersive | ExtractableOf Real Worlds | Inspiring to Action Next page: Building Transmedia Journalism “There are no new ideas in the world. Only a new arrangement of things.” — Henri Cartier-Bresson Almost Transmedia Looking at journalism in terms of Henry Jenkins’ seven principles, all of the characteristics of transmedia as he defines it have individually been implemented in a journalism or documentary context before. Though they may not yet have been designed together in a single storyline, all the pieces of the puzzle are there already.