The World Without Us - Alan Weisman 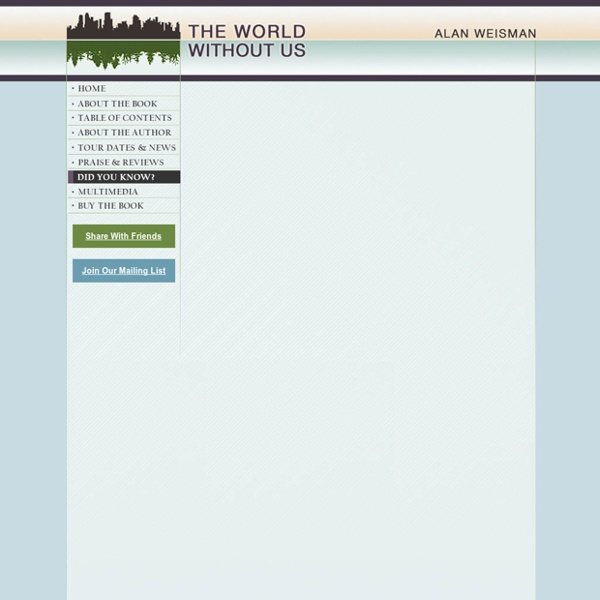 Top 10 Common Faults In Human Thought Humans The human mind is a wonderful thing. Cognition, the act or process of thinking, enables us to process vast amounts of information quickly. For example, every time your eyes are open, you brain is constantly being bombarded with stimuli. You may be consciously thinking about one specific thing, but you brain is processing thousands of subconscious ideas. Unfortunately, our cognition is not perfect, and there are certain judgment errors that we are prone to making, known in the field of psychology as cognitive biases. The Gambler’s fallacy is the tendency to think that future probabilities are altered by past events, when in reality, they are not. Reactivity is the tendency of people to act or appear differently when they know that they are being observed. Pareidolia is when random images or sounds are perceived as significant. Interesting Fact: the Rorschach Inkblot test was developed to use pareidolia to tap into people’s mental states. Self-fulfilling Prophecy

Biology Homepage The important thing is to not stop questioning. - Albert Einstein The Biology course is a requirement for graduation in Visalia Unified School District. The course also fulfills University of California requirements for a laboratory science. At El Diamante, the majority of sophomores are enrolled in Biology as their science course. Though I am not teaching biology during the 2014 - 2015 school year, I am leaving my resources available to students and teachers who might find them useful. Resources for Biology Biology resources include all of my PowerPoint presentations. I do appreciate hearing from users of this site.

Asia-Pacific | Ageing &#039;threatens China economy&# China's position as the world's major supplier of low-cost labour could be eroded by an ageing population, the authorities have warned. There are six workers for each retiree in China, but that could narrow to two-to-one between 2030 and 2050, the National Committee on Ageing says. Officials say the economy will suffer as there will be fewer people working and more older people to support. China's low-cost labour has provided the base for its economic growth. Improved living standards and strict family planning laws have contributed to the demographic change. "We might encounter the heaviest burden especially after 2030, when the demographic dividend is set to end," Yan Qingchun, deputy director of the office of the ageing committee, told China Daily. "With fewer people of working age and more pressure in supporting the elderly, the economy will suffer if productivity sees no major progress," he added. 'Not prepared' That would mean two workers to support every retiree.

NetBanker Interactives archive: Biology Anatomy of ChildbirthReview the three stages of having a baby as well as some of the risks women face. Anatomy of the CoelacanthThis survivor from the age of dinosaurs has body parts found in no other living creature. Anatomy of a CrocExamine a Nile crocodile and see what makes this amazing reptile tick. Anatomy of a HiveInvestigate the physical, behavioral, and social infrastructure inside a bees' nest. Anatomy of Photo 51When you know how to look at it, this shadowy X-ray photograph speaks volumes about the shape of DNA. Bacteria TalkIn this interview, Bassler describes the 600 species of bacteria on your teeth each morning, and much more. Brain GeographyLearn how to model a brain and find out more about the cerebellum, spinal cord, brain stem, and cerebral cortex. Build a SteroidFollow the steps a chemist takes to synthesize a disease-fighting drug. Classifying LifeWhat do a polar bear and a sea cucumber have in common? Coelacanth QuizDoes this fish lay eggs? Guess What's Coming to Dinner?

Ten games that make you think about life At the start of this year, we decided to come up with a list of Flash casual games with a philosophical bent. To be honest, we struggled. After days of research, we could only find a handful of games that had the thought-provoking depth we were looking for. Our list (which you can view by clicking here) was therefore only five games long. Fast forward to now, and it is remarkable how much difference a few months can make. In a wonderful twist, it seems it is the Flash gaming space - until now known more for the throwaway nature of its games rather than depth - that is leading the way in this exciting new area of gaming, as we hope the following games prove. One you have finished playing these games, check out our follow-up lists: Ten More Games That Make You Think About Life and Another 20 Games That Make You Think About Life. 1Immortall The game starts with you crash landing on a planet. 2Loved 3I Can Hold My Breath Forever 4The Company of Myself 5Coma 6Loondon 7I Wish I Were the Moon

Nearly 1 in 4 people worldwide is Muslim, report says The Über-Connected Organization: A Mandate for 2010 - The Conver by Jeanne C Meister and Karie Willyerd | 8:54 AM November 11, 2009 Think about your organization and ask yourself these two questions: Are external social media sites restricted or blocked while at work?Is the use of social media in the workplace inhibited or frowned upon? If you answered yes, then your organization is one of the majority of firms with over 100 employees that have yet to embrace the use of social media in the workplace for the average worker. In a study conducted by Robert Half Technology entitled “Whistle But Don’t Tweet At Work,” many organizations are struggling with how to integrate social media into the workplace. However, there are a growing number of firms such as IBM, Toshiba, and Cerner Corporation that are becoming über-connected workplaces. Recent research provides evidence that there are business benefits to becoming an über-connected organization: Access to social media improves productivity. What business benefits are you trying to solve?

mental_floss Blog & The Quick 10: 10 Things You Probably Didn't... With Harry Potter and the Half Blood Prince coming out in the U.S. later this week, it's time to out myself as a Slytherin Supporter. Maybe you already knew that. Nothing against Gryffindors - I'm no Voldemort or anything - but I always tend to like the villains a little more than the do-gooders. To celebrate Harry and Co.' 1. It has a sour tone to it, doesn't it? 3. 4. 5. 7. 8. 9. There's obviously a ridiculous amount of Harry Potter trivia out there, and since Harry Potter fever is about to sweep the world again, we might as well share it. State of World Population 2009 How do population dynamics affect greenhouse gases and climate change? Will urbanization and an ageing population help or hinder efforts to adapt to a warming world? And could better reproductive health care and improved relations between women and men make a difference in the fight against climate change? Find the answers in the State of World Population 2009. The whole world has been talking about carbon credits, carbon trading and emissions targets. The climate-change debate needs to be reframed, putting people at the centre. + Previous Years' Reports