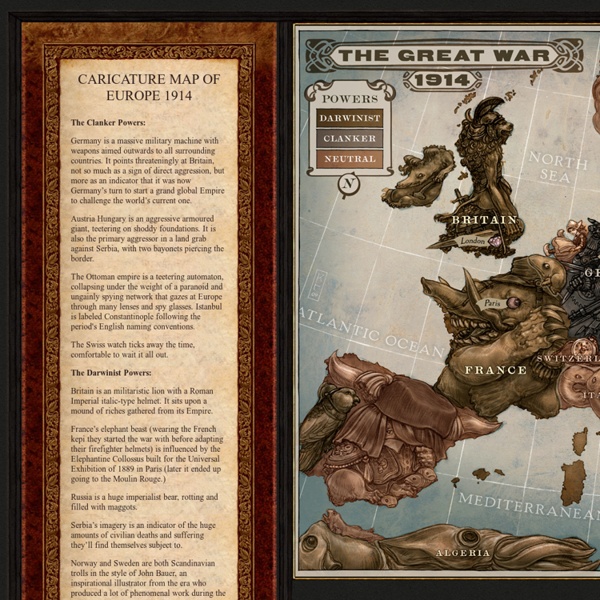 The Clanker Powers: Germany is a massive military machine with weapons aimed outwards to all surrounding countries. It points threateningly at Britain, not so much as a sign of direct aggression, but more as an indicator that it was now Germany’s turn to start a grand global Empire to challenge the world’s current one. Austria Hungary is an aggressive armoured giant, teetering on shoddy foundations. It is also the primary aggressor in a land grab against Serbia, with two bayonets piercing the border. The Ottoman empire is a teetering automaton, collapsing under the weight of a paranoid and ungainly spying network that gazes at Europe through many lenses and spy glasses. The Swiss watch ticks away the time, comfortable to wait it all out. The Darwinist Powers: Britain is an militaristic lion with a Roman Imperial italic-type helmet. Russia is a huge imperialist bear, rotting and filled with maggots. Portugal is a parrot for the Entente trying to goad a slumbering Spain into the war.

iTunes U course and Multi-Touch Book on the First World War! Whether you’re a school student or a WW1 enthusiast, you can now discover the different causes leading to the First World War with our new iTunes U course and Multi-Touch Book. The book and related course, available on iTunes in both Dutch and English, use fascinating historical materials to bring the months and years before the outbreak of war into focus. Many of these sources are drawn from Europeana 1914-1918, our dedicated WW1 site which brings together hundreds of thousands of items related to the war from heritage institutions and members of the public across Europe. From postcards and political cartoons, to maps and propaganda, the story of the crisis is told from a whole range of voices and perspectives.

maps home page Down to: 6th to 15th Centuries | 16th and 19th Centuries | 1901 to World War Two | 1946 to 21st Century The Ancient World ... index of places Aegean Region, to 300 BCE Aegean Region, 185 BCE Africa, 2500 to 1500 BCE TetraBox Light by Ed Chew Liquid to Light Designer Ed Chew takes a green step in the right direction with the TetraBox lamp, a light object made from discarded drink packets that would have otherwise ended up in landfills already packed to the brim. The design is achieved by unfolding the packets and refolding them into hexagonal and pentagonal sections that are then pieced together to form a geodesic sphere or any other desired shape. Here, the Epcot-like ball makes an attractive overhead light and casts an impressive web of shadows and shapes on the surrounding space. Designer: Ed Chew

Worth1000 Home Welcome fans of Worth1000.com. If you're looking for Worth's amazing creative content, then you've rocked up to the right place! Just in case you missed the news, Worth1000.com is now part of DesignCrowd.com - and we've preserved all the amazing Worth1000 content here so you can search the archives to find old favorites and new contest art. The Mounted Soldiers of Australia — Australian Light Horse Association Horses have played a special role in the story of Australia. For the first hundred years of European settlement they were the only means of transport across most of our huge country. Outside the few cities, ability to ride a horse was almost as basic as the ability to walk. The value of the mounted soldier in Australia was first shown in 1804 when redcoats of the New South Wales Corps set out in pursuit of a large force of rebel convicts who had broken out of the Castle Hill Prison Farm. Riding with the commanding officer of the Corps was a trooper called Thomas Anelzark, a member of Governor King's mounted convict bodyguard.

the simple image sharer Paris Cohen photographs the world’s major cities, seeking out views that resonate for him and noting the precise time, angle, and latitude and longitude of his exposure. Rio de Janeiro AE2 enters the Dardanelles, 1915 - History (9) - ABC Splash - Overview This media resource contains content that shows images of war. World War I was fought on land, in the air, on the sea and below it. What role did AE2, an Australian submarine, play in the campaign to take Turkey's Gallipoli Peninsula in 1915? In this vivid re-enactment you will journey into the hazards of the Dardanelles Strait with the crew of AE2 as it commences what many believed would be a suicide mission.

An Elderly Couple Took The Same Photo Every Season. But Nothing Could Prepare Me For The Last One. The saying “a picture is worth a thousand words” for a reason. Explaining how we feel is one way of getting a message across. Another is simply showing each other how we feel. During each season, this couple took a photo together in front of their house. In the resulting series of images below, without saying anything at all, a love story is being told. It’s full of hope, joy, fear and loss, but it’s told in the most unique way. World War I 1914-1919: A Source-based Study Syllabus | Exams | Websites | Resources | Glossary | Teachers Modern History Home > Modern History > Core Study > World War I 1914-1919: A Source-based Study Key historical features | Concepts | Historiographical issues | Framework

No Photoshopped: Jee Young Lee Creates Surreal Dreamscapes in Her Small Studio Korean artist Jee Young Lee has been weaving herself into exceedingly clever dream worlds she creates in her studio… and despite their other worldly appearance she uses absolutely no photo manipulation for the end result. In each image you can find Lee’s young figure hidden among the vibrant details of her carefully constructed, set-like pieces – perhaps a hand poking up from the center of a watery vortex of swirling fans, or her body floating in a lotus as in the picture above (inspired by the Story of Shim Cheong, a Korea folktale as well as by Shakespeare’s Ophelia). See Also Child’s Caves: Re-Imagining The Fantasies of Childhood Lee’s small studio is hardly a hinderance for her creativity. Measuring just 360 x 410 x 240 cm (approximately 12 x 13 x 8 feet), she is able to bring to life worlds which only make sense in dreams.

World War I Allied Propaganda Posters *Disclaimer: World War I Allied Propaganda Posters are dispalyed as historical documents of the era only and is not intended to promote or dissaprove any theories, views, notions, as well as any political, milirtary, social and any other types of actions for or against anybody and/or anything. Some portions of this webpage may contain extremely graphic images and/or text, which may offend sensitive viewers and are not recommended for viewing by persons under the age of 18. Viewer discretion is strongly advised.