Informationliberation - The news you're not supposed to know... 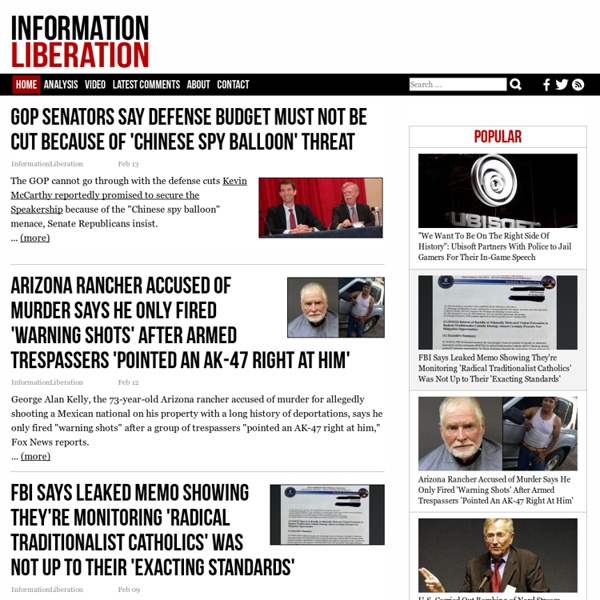 Animal Mutilation The FBI’s Reading Room contains many files of public interest and historical value. In compliance with the National Archives and Records Administration (NARA) requirements, some of these records are no longer in the physical possession of the FBI, eliminating the FBI’s capability to re-review and/or re-process this material. Please note, that the information found in these files may no longer reflect the current beliefs, positions, opinions, or policies currently held by the FBI. The image quality contained within this site is subject to the condition of the original documents and original scanning efforts. These older files may contain processing procedures that are not compliant with current FOIA processing standards. All recently scanned images posted to the Reading Room adhere to the NARA 300 DPI standard.

Top 10 Ways to Make Yourself Look (and Be) Smarter How terribly obnoxious of you. Thanks for sharing. Well, it is probably not the smartest move ever to call monolingual people dumb. But here in Europe (or at least in most countries) learning a second language is compulsory in secondary school. Therefore not speaking a second language often goes along with a lack of general education, probably leading roelroelroel to this bovine conclusion. People in Europe need only travel a few hours to encounter another language, and bi- and tri-linguality is essential to business and communication there.

Whistleblower Magazine April 2014 – THE WAR FOR THE GOP: How conservatives plan to take over the Republican Party and stop the Obama juggernaut Get special discounts on quantity purchases of your favorite Whistleblower issues. For more information or to order at quantity discounts, please call WND Customer Service toll-free at 1-800-496-3266 (1-800-4WND-COM) or email support@wnd.com. It’s a crazy situation: Conservative-minded Americans – people who a generation ago were part of the “Reagan Revolution,” and today might identify with the “tea party” – are caught up in not just one, but two civil wars. The first conflict everyone knows about: America is more polarized today than at any time in the last century.

Conspiracy Theorist conspiracy theorist » Bush and His Aides Made 935 False Statements about Iraq In the 2 Years After 9/11 Given the Republican obsession with Benghazi talking points, it’s time for a very specific flashback. The Mystery Woman Behind the Murdoch Mess Rebekah Wade was 20 years old in 1988 when she showed up at the Warrington office of The Post, a now defunct national tabloid. As Graham Ball, then the features editor, recalled to the BBC, she approached him and said, “I am going to come and work with you on the features desk as the features secretary or administrator.” He told her that would be impossible, as he was moving the next week to work in the paper’s London office.