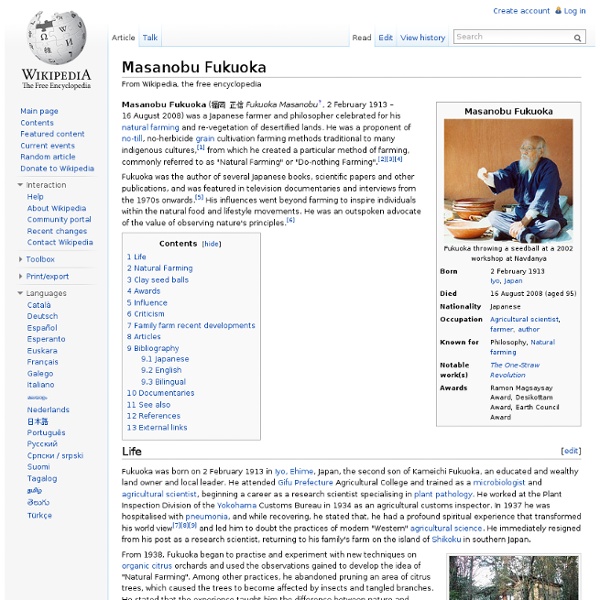 Masanobu Fukuoka (福岡 正信?) (2 February 1913 – 16 August 2008) was a Japanese farmer and philosopher celebrated for his natural farming and re-vegetation of desertified lands. He was a proponent of no-till, no-herbicide grain cultivation farming methods traditional to many indigenous cultures,[1] from which he created a particular method of farming, commonly referred to as "Natural Farming" or "Do-nothing Farming".[2][3][4] Fukuoka was the author of several Japanese books, scientific papers and other publications, and was featured in television documentaries and interviews from the 1970s onwards.[5] His influences went beyond farming to inspire individuals within the natural food and lifestyle movements. Life[edit] Fukuoka was born on 2 February 1913 in Iyo, Ehime, Japan, the second son of Kameichi Fukuoka, an educated and wealthy land owner and local leader. Iyo, Ehime. Iyo, Ehime. In 1940, Fukuoka married his wife Ayako, and over his life they had five children together. Awards[edit] Related:  Sustainable food advocates

Richard Levins Richard "Dick" Levins is a mathematical ecologist, and political activist. He is best known for his work on evolution in changing environments and on metapopulations. Levins' writing and speaking is extremely condensed. Levins also has written on philosophical issues in biology and modelling. Also with Lewontin, Levins has co-authored a number of satirical articles criticizing sociobiology, systems modeling in ecology, and other topics under the pseudonym Isadore Nabi. Biography[edit] Levins was born in New York on June 1, 1930. Levins studied agriculture and mathematics at Cornell. Levins is John Rock Professor of Population Sciences at the Harvard School of Public Health. Evolution in changing environments[edit] Prior to Levins' work, population genetics assumed the environment to be constant, while mathematical ecology assumed the genetic makeup of the species involved to be constant. [edit] Awards[edit] Selected bibliography[edit] Levins, R. References[edit] External links[edit]

Frances Moore Lappé | Small Planet Institute Frances Moore Lappé is the author or co-author of 18 books including the three-million copy Diet for a Small Planet. Her most recent work, released by Nation Books in September 2011, is EcoMind: Changing the Way We Think to Create the World We Want, winner of a silver medal from the Independent Publisher Book Awards in the Environment/Ecology/Nature category. Jane Goodall called the book "powerful and inspiring. "Ecomind will open your eyes and change your thinking. I want everyone to read it," she said. She is the cofounder of three organizations, including Oakland based think tank Food First and, more recently, the Small Planet Institute, a collaborative network for research and popular education seeking to bring democracy to life, which she leads with her daughter Anna Lappé. A small number of people in every generation are forerunners, in thought, action, spirit, who swerve past the barriers of greed and power to hold a torch high for the rest of us. —The Washington Post

Right Livelihood Award: 1988 - José Lutzenberger "...for his contribution to protecting the natural environment in Brazil and worldwide." José Lutzenberger, born in 1926, was a Brazilian agronomist who worked for 15 years with a multinational chemical corporation, but left in 1970 to start a vigorous and successful campaign against pesticides and for organic farming. What followed was great progress in Brazil among farmers large and small concerning organic crop management; increasing numbers of them began to use less poisons and turned to more regenerative methods of production. As an agronomist, interested in healthy, clean, sustainable agriculture, Lutzenberger went into sanitary engineering. Lutzenberger's activities in Brazil were combined with a gruelling international speaking schedule that took him regularly to many countries on all continents. From 1990 to '92 he was Special Secretary for the Environment to the President of Brazil. Lutzenberger passed away in 2002 at the age of 75.

Joel Salatin Salatin giving a tour of his farm Joel F. Salatin (born 1957) is an American farmer, lecturer, and author whose books include Folks, This Ain't Normal; You Can Farm; and Salad Bar Beef. Salatin raises livestock using holistic management methods of animal husbandry, free of potentially harmful chemicals, on his Polyface Farm in Swoope, Virginia, in the Shenandoah Valley. Biography[edit] In high school, Salatin began his own business selling rabbits, eggs, butter and chicken from his family farm at the Staunton Curb Market.[2] He then attended Bob Jones University where he majored in English and was a student leader. Tired of "having his stories spiked," he decided to try farming full-time after first getting involved in a walnut-buying station run by two high school boys.[5] Salatin's grandfather had been an avid gardener and beekeeper and a follower of J. Salatin with a flock of egg-laying hens that are housed in a large, portable coop, surrounded by predator-deterrent electric netting.

Jack Kloppenburg | Community and Environmental Sociology C&ES Professor Jack Kloppenburg loves to garden. But the new GreenHouse he has worked to build on campus will be growing citizens, not plants! Fall semester 2010 will see the inauguration of the GreenHouse, a residential learning community which takes sustainability as its constitutive theme. Residential learning communities are residence halls organized around the provision of diverse, integrated, curricular and extracurricular educational opportunities for the students who live there. Convinced that a residential learning community focused on sustainability would be a timely and pedagogically productive addition to campus life and learning, a group of faculty, staff, and students led by Kloppenburg have spent the last year developing a plan for its implementation. The GreenHouse is being materially underwritten by the College of Agricultural and Life Sciences and the College of Letters and Sciences. Cole Hall itself will be a key component of GreenHouse programming. Back to Index

Food Hero: Janie Simms Hipp, Founder of the Indigenous Food and Agriculture Initiative Janie Simms Hipp (Chickasaw Nation) recently left an interesting career as a Senior Advisor for Tribal Affairs at the U.S. Department of Agriculture (USDA), and Director of the USDA Office of Tribal Relations to help launch the first-ever Indigenous Food and Agriculture Initiative at the University of Fayetteville, Arkansas. She is not only incredibly smart, but she is also near-to-bursting with enthusiasm and new strategies for supporting indigenous youth in agriculture. This month I interviewed Janie about her work to support and promote indigenous agriculture in Indian Country. [Janie Simms Hipp] I come from a very rural area of the country; I’m Chickasaw and I grew up deep in Choctaw areas of Oklahoma. [Kelsey Jones-Casey] What is your personal mission statement? I don’t think I have ever sat down and identified a “personal mission statement.” What/who motivates you? What motivates me is our young people. Its finding out about things like that that keep me going and keep me excited.

Michael Pollan Michael Pollan (born February 6, 1955)[citation needed] is an American author, journalist, activist, and professor of journalism at the UC Berkeley Graduate School of Journalism.[1] A 2006 New York Times book review describes him as a "liberal foodie intellectual."[2] Early years[edit] Pollan was born on February 6, 1955 in Long Island, New York, into a Jewish family.[3][4] He is the son of author and financial consultant Stephen Pollan and columnist Corky Pollan.[5] Pollan received a B.A. in English from Bennington College in 1977 and an M.A. in English from Columbia University in 1981.[6] Career[edit] Books[edit] Pollan's book In Defense of Food: An Eater's Manifesto, released on January 1, 2008, explores the relationship with what he terms nutritionism and the Western diet, with a focus on late 20th century food advice given by the science community. In 2009, Food Rules: An Eater's Manual was published. Other work[edit] Criticism[edit] Bibliography[edit] Books Essays "Opium Made Easy".

About Marion Nestle Marion Nestle is Paulette Goddard Professor in the Department of Nutrition, Food Studies, and Public Health (the department she chaired from 1988-2003) and Professor of Sociology at New York University. Her degrees include a Ph.D. in molecular biology and an M.P.H. in public health nutrition, both from the University of California, Berkeley (continues below). For her c.v., click here. For photos, see below and click on the link to the right. Her first faculty position was in the Department of Biology at Brandeis University. From 1986-88, she was senior nutrition policy advisor in the Department of Health and Human Services and managing editor of the 1988 Surgeon General’s Report on Nutrition and Health. She is the author of Food Politics: How the Food Industry Influences Nutrition and Health (2002, paperback 2003) and Safe Food: The Politics of Food Safety (2003, paperback 2004), both from University of California Press. With Andrew Weil, October 8, 2012