Welcome to the OGC 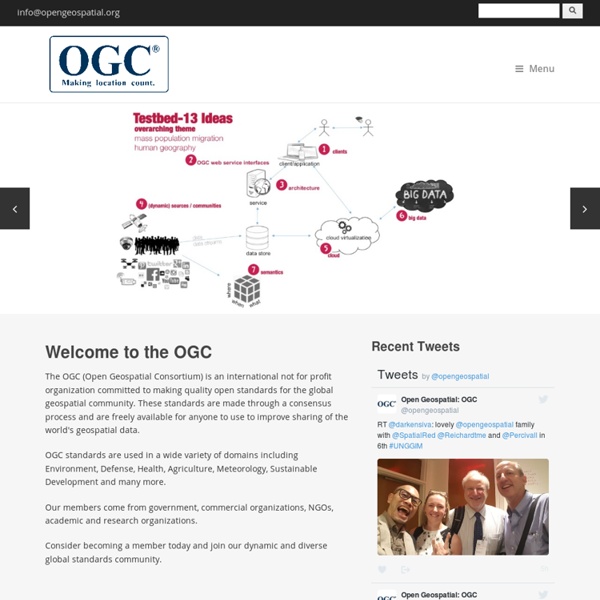 ISO 3166 Parts[edit] It consists of three parts:[1] ISO 3166-1, Codes for the representation of names of countries and their subdivisions – Part 1: Country codes, defines codes for the names of countries, dependent territories, and special areas of geographical interest. Editions[edit] The first edition of ISO 3166 was published in 1974, which included only alphabetic country codes. MapWindow.web virtual development machine MapWindow.web virtual development machine Type: Other > Other Files: Size: 2.73 GiB (2935660320 Bytes) GIS video collection I’m teaching also in Aalto University (ex-Helsinki University of Technology). More accurately in Aalto University, School of Engineering’s Department of Surveying’s Geomatics Research Group (shortly AUSoEDoSGRG ;-)). I don’t know how many people they are using for naming, but I’m sure they just do great job, aren’t they?

Using GIS to Form Resilient Public Health Plans As Negative Health Effects from Climate Change Grow, Sophisticated Technology Will Guide Preparation By Alex Philp, PhD, Upstream Research, Inc. The earth's climate is changing, and this will have a tremendous impact on human health. Geospatial Metadata Standards — Federal Geographic Data Committee Geospatial Metadata Standards and Guidelines When metadata records are formatted to a common standard, it facilitates the location and readability of the metadata by both humans and machines. NSDI Stakeholders have long utilized the Content Standard for Digital Geospatial Metadata (CSDGM). However, Circular A-119 Revised directs agencies to use voluntary consensus standards in lieu of government-unique standards. Furthermore, Circular A-16 promotes the use of international standards to advance the building of the Global Spatial Data Infrastructure (GSDI). Several ISO metadata standards are now endorsed by the FGDC and federal agencies and NSDI Stakeholders are encouraged to make the transition to ISO metadata.

DotSpatial CodePlexProject Hosting for Open Source Software Documentation DotSpatial Tutorials Tutorials Should I create an extension or an application? Why should open source geospatial software be taken seriously? It’s now the eve of the State of the Map (SOTM) and Free and Open Source Software for Geospatial (FOSS4G) events, which take place back-to-back in Denver. The OpenStreetMap and FOSS4G communities will converge to cover open data and open source software, with a focus on development tools, applications, and shared objectives. The combined audience of more than one thousand users and contributors from around the globe (200 for SOTM and more than 840 for FOSS4G) speaks to a vibrancy in tough economic times, and should make you wonder what you’re missing if you’ve brushed aside this community in the past. GIS got its start largely as open source software from academic research labs, and really got a jump start with spatial data provided openly and freely by government agencies (at least here in the United States).

Taking Maps in a New Direction Apps bridge people to the things they want and the places they want to find via their phone, tablet, or PC quickly and effortlessly. Consumers specifically, use apps for their most basic needs and desires; checking the weather, listening to music, scoping out deals, finding new venues, and of course communicating with friends. With this information readily available, consumers have a more intimate, connected and relevant experience with your business. Bing Maps allows your application to: Quickly visualize data on a map—such as geographic coordinates, employee distribution and retail locations. Make GIS data more accessible to users in your organisation and across geographies with a web services solution.