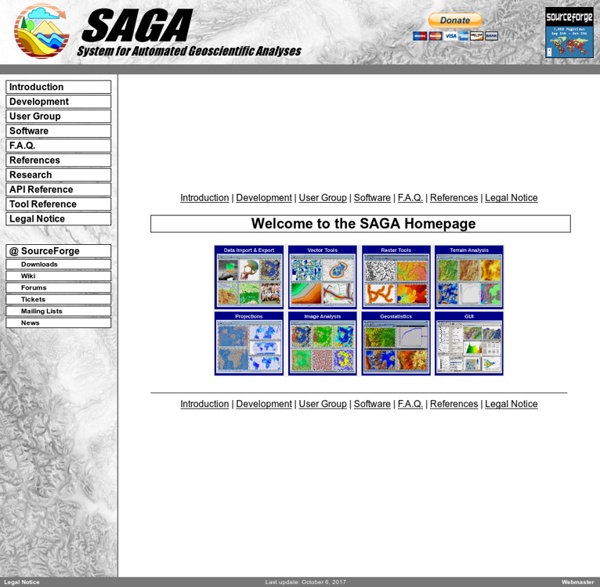 Mesh Generation and Grid Generation: Software This is a list of public domain and commercial mesh generators (click here for other sources of interest). I have listened only programs for which online information exists. There is also a section on papers that review mesh generators. If you are interested in special programs, the following links might guide you directly to interesting places: A list of public domain, downloadable and university codes: Companies offering mesh generation software: Review papers: Other sources of interest: Back to the mesh generation homepage. Kosmo-Plataforma SIG libre corporativa - Home surfit: open source gridding and contouring software OpenJUMP GIS SurGe - gridding and mapping software Introduction SurGe is a computer program which enables to generate a surface as an interpolation (approximation) function of two independent variables. The program has the following basic features: Implements the interpolation / approximation method ABOS. Basic input is a simple ASCII file containing X, Y and Z coordinates of points irregularly spaced in some region. Installation Windows SurGe was compiled under MS Windows 7 and it was also tested under MS Windows 2000 and MS Windows XP. To install the program, follow these steps: Download SurGe650.zip and unzip it to SurGe650.exe. The installation creates shortcut (link) icon to the SurGe Project Manager (SPM.EXE) at your desktop. It is also recommended to edit your AUTOEXEC.BAT and add the full name of the SurGe directory (for example C:\SURGE) into the environment variable PATH. 64-bit version The users of 64-bit Windows may try 64-bit version of SURGEF interpolation engine (SurGeF64.zip), which is about 20% faster. Registration

3D converters software - on Linux - Notes and Code Introduction : This is a page of links to 3D software files --- files that can be used to install (or develop) 3D CONVERTER programs --- on Linux systems --- especially on Ubuntu (around version 9.10 = 2009 Oct, Karmic Koala - and beyond). Many of the links are to locally stored files (source and/or binaries/packages). The code is stored locally both for convenience (especially mine), AND because some of the 3D-converter authors are going on to other projects (or to other worlds) and it is questionable whether the code will be preserved for future generations to build upon. Furthermore, the info on 3D converters for Linux is consolidated (to a great extent) on this one page --- instead of in many bookmarks in my web browsers on my various machines. In addition, many software sites go dead (or, at least, move). The 3D converter programs that I am talking about are meant to convert (on Linux) between 3D file formats like the following : - 'mm3d' Export-Model-Dialog window -

Virtual Terrain Project The GMT Home Page QuikGrid QUIKGRID 3-D rendering of a surface represented by scattered data points QuikGrid is free software released under the GNU General Public License. Version 5.4 is the most recent release. Microsoft is phasing out support for the Windows help facility (WinHLP) that QuikGrid uses. "The Help for this program was created in Windows Help format, which depends on a feature that isn’t included in this version of Windows. Further information is available from Microsoft here. Send email to: retired at galiander.ca (Replace "at" with @ and remove spaces when entering my email address). I am happy to provide what support I can. QUIKGRID is a program which will read in a set of scattered data points (x, y, z) which represents a surface. A dredged channel on a section of the Ganges river A 200 by 200 grid representing 15,000 data points may be gridded in less than 3 seconds on a 500 Mhz Pentium (actual generation times may vary depending on how the points are distributed). QUIKGRID is easy to use.