AudioMD and VideoMD - Technical Metadata for Audio and Video (Standards, Library of Congress) AudioMD and videoMD are XML Schemas that detail technical metadata for audio- and video-based digital objects. They often serve as extension schemas within the Metadata Encoding and Transmission Standard (METS) administrative metadata section or in PREMIS version 2.0 or later in <objectCharacteristicsExtension>. They are also suitable for use as standalone metadata documents or may be considered for incorporation into other structures, e.g., as embedded metadata in Material eXchange Format (MXF) files. 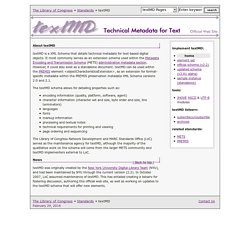 It most commonly serves as an extension schema used within the Metadata Encoding and Transmission Schema (METS) administrative metadata section. However, it could also exist as a standalone document. textMD can be used within the PREMIS element <objectCharacteristicsExtension>, as an extension for format-specific metadata within the PREMIS preservation metadata XML Schema versions 2.0 and 2.1. The textMD schema allows for detailing properties such as: encoding information (quality, platform, software, agent) character information (character set and size, byte order and size, line terminators) languages fonts markup information processing and textual notes technical requirements for printing and viewing page ordering and sequencing. PREMIS: Preservation Metadata Maintenance Activity. The PREMIS Data Dictionary for Preservation Metadata is the international standard for metadata to support the preservation of digital objects and ensure their long-term usability. 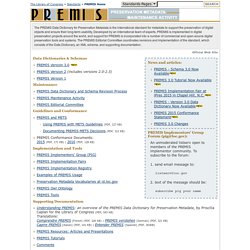 Developed by an international team of experts, PREMIS is implemented in digital preservation projects around the world, and support for PREMIS is incorporated into a number of commercial and open-source digital preservation tools and systems. The PREMIS Editorial Committee coordinates revisions and implementation of the standard, which consists of the Data Dictionary, an XML schema, and supporting documentation. Data Dictionaries & Schemas Maintenance.