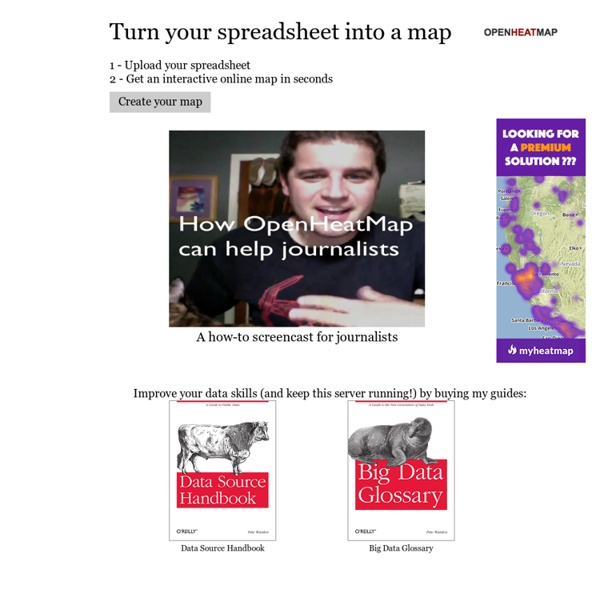 The digital journalist’s toolbox: mapping Engaging and interactive journalism is still possible even without an extensive knowledge of coding. But how? We’ve taken the guesswork out, scouring the internet to find the most accessible tools to create multimedia content. Below, you’ll find a collection of completely free applications that will do all the work for you — no coding required: Google My Maps: This tool is probably the most familiar, simply because it mimics maps seen on a phone’s GPS. With My Maps, you can create your own customizable Google map with pins, layers, text and photos. [site de carto] explication de prettymaps prettymaps is an experimental map from Stamen Design. It is an interactive map composed of multiple freely available, community-generated data sources: All the Flickr shapefiles rendered as a semi-transparent white ground on top of which all the other layers are displayed. Urban areas from Natural Earth both as a standalone layer and combined with Flickr shapefiles for cities and neighbourhoods. Road, highway and path data collected by the OpenStreetMap (OSM) project. In all there are four different raster layers and six data layers (that mean all the map data is sent in its raw form and rendered as visual elements by the browser) that may be visible depending on the bounding box and zoom level of the map.

[site] Cartographie esthétique prettymaps The short version is simply that there's a huge amount of data being sent across the network and then processed and finally rendered by your computer. We've looked at the logs for the machine hosting prettymaps and it seems happy enough serving all the requests that people are sending it. The other reason is that the data hasn't been compressed or optimized as much it could be. For example, the four separate image layers could be collapsed in to a single layer. Likewise the data layers, although we've found a few more places to tighten things up since we first launched.

Over 100 Incredible Infographic Tools and Resources (Categorized) This post is #6 in DailyTekk’s famous Top 100 series which explores the best startups, gadgets, apps, websites and services in a given category. Total items listed: 112. Time to compile: 8+ hours. Follow @DailyTekk on Twitter to make sure you don’t miss a week! Update: Be sure to check out our latest post on infographics: Infographics Are Everywhere – Here’s How to Make Yours Go Viral. I love a good infographic!

Using GIS to Form Resilient Public Health Plans As Negative Health Effects from Climate Change Grow, Sophisticated Technology Will Guide Preparation By Alex Philp, PhD, Upstream Research, Inc. The earth's climate is changing, and this will have a tremendous impact on human health. But the relationship between climate change and health is complex. Ongoing climate change observations and associated prediction models show clear evidence that significant portions of the American population are experiencing various health-related repercussions.

Better web cartography with dot density maps and new tools « News Apps Blog Between Brian, Joe, and myself there hasn’t been a time in the last six months where at least one of us wasn’t working with census data. Back in February we attacked the less-detailed (redistricting) data for print and the web. In April, May, and June we contributed to a joint effort with an esteemed cadre of news nerds to develop census.ire.org, a site intended to make it easier for journalists to report from census data. And to prepare for this recent release, we even spent a week hacking near-complete prototype maps using data that the census had already released, Kings County, New York. We learned hard lessons about the scale and nuance of the census in the last few months, and along the way, further built out our toolkit for making maps. Last week the Census Bureau released detailed (summary file) data for Illinois, and we used our new tools to produce a couple of maps we’re pretty excited about:

Taking Maps in a New Direction Apps bridge people to the things they want and the places they want to find via their phone, tablet, or PC quickly and effortlessly. Consumers specifically, use apps for their most basic needs and desires; checking the weather, listening to music, scoping out deals, finding new venues, and of course communicating with friends. With this information readily available, consumers have a more intimate, connected and relevant experience with your business. Bing Maps allows your application to: