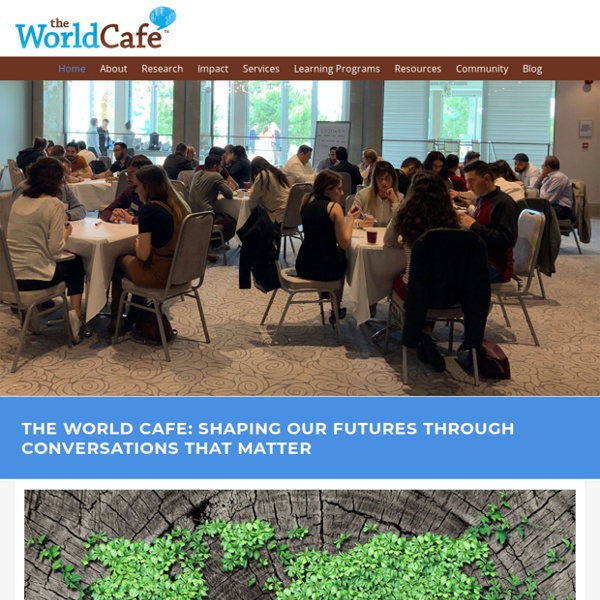 World Café Method Drawing on seven integrated design principles, the World Café methodology is a simple, effective, and flexible format for hosting large group dialogue. World Café can be modified to meet a wide variety of needs. Specifics of context, numbers, purpose, location, and other circumstances are factored into each event's unique invitation, design, and question choice, but the following five components comprise the basic model: 1) Setting: Create a "special" environment, most often modelled after a café, i.e. small round tables covered with a checkered tablecloth, butcher block paper, colored pens, a vase of flowers, and optional "talking stick" item. There should be four chairs at each table.

3 More Basic Tools For Group Conversations For those who have experience in group process, this post may seem pretty basic. Nevertheless I am including it in this series on dealing with conflict because some readers may not have that much experience leading group process. Even those who do may find something useful in this summary of 3 more basic tools for group conversation. 5 UX Workshops Cheat Sheet What Is a UX Workshop? UX workshops are intensive collaborative sessions used to solve problems and enable progress on a particular challenge throughout the design timeline. Workshops enable participants to come together for a concentrated time of idea generation and hands-on activities that allow them to achieve an actionable goal. Several variables distinguish workshops from traditional meetings:

Workshop formats: World cafe Not an original notion - but an interesting one. The World cafe concept has been around a while www.theworldcafe.com. We use this technique often in our workshops (dial-e.net), and at a recent event UTS (University of Technology Sydney) it attracted some interesting comments - so perhaps worth a reminder. You've done some input, you have some group tasks defined and the groups are all working away.

Turning to One Another: Simple Conversations to Restore Hope to the Future Conversation is innate to humans. You can rely on this as you invite people to join a conversation. Talking and listening to one another is something we remember; it’s what humans have done for thousands of years, so it’s deep in our species' memory. These 7 Questions Will Change Your Life At the end of every day or week comes the important act of self-reflection. Without this brief moment of pause, our moral and spiritual growth would be undeniably stilted. How, then, do we go about achieving such internal clarity and self-awareness? Usually through the act of self-questioning.

The World Cafe The World Cafe refers to both a vision and a method of dialogue. It evolved out of conversations and experimentation one day at the home of consultants Juanita Brown and David Isaacs. World Café Conversations are an intentional way to create a living network of conversation around questions that matter. A Café Conversation is a creative process for leading collaborative dialogue, sharing knowledge and creating possibilities for action in groups of all sizes. The challenges of life in the 21st Century require us to find new ways to access the wisdom and intelligence inherent in groups both small and large.

Resource Center » Talking Circle Talking Circle is a different kind of meeting than most modern people are used to. The focus is on deepening, exploring and learning together, not on getting things done or completing an agenda. It is possible, with expert facilitation and savvy participation, to do both linear and circular modes in one meeting. Talking Circles are also referred to as Talking Stick Circles, Listening Circles, Wisdom Circles, and the Council Process. If you have an agenda, you can often fit some circle into it. Resource Center » Socratic Seminars “Socratic Seminar” is perhaps the most widely varied and commonly known name for a class discussion model in which the teacher poses questions concerning a text or idea, and students respond. No individual or organization claims ownership of the model, and most practitioners trace its history to the Platonic Dialogues, in which Socrates engaged his interlocutors in a methodical line of questioning. The work of Mortimer Adler, Robert Hutchins, and Dennis Gray are often cited as the sources of modern Socratic Seminar models.