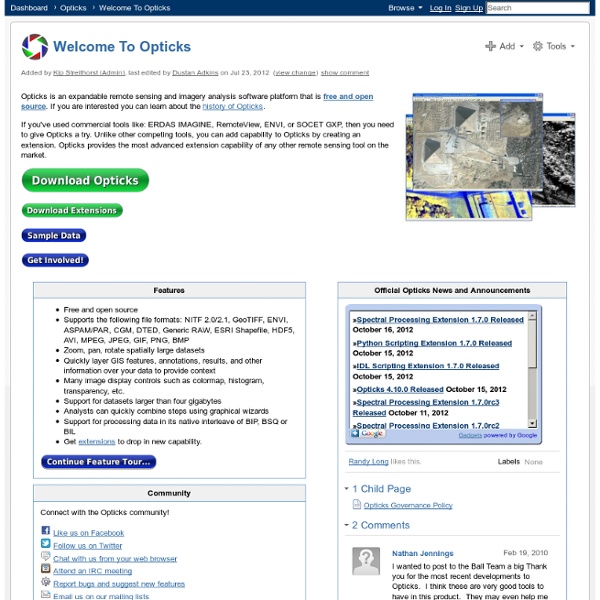 GRASS GIS - Home The TileProxy Project | Download The TileProxy Project software for free Convert, Edit, and Compose Images Home Ray Tracing and Gaming - Quake 4: Ray Traced Project Introduction to Ray Tracing Guest author Daniel Pohl shares with us his insight into using raytracing for game rendering and how the increasing power of multi-core processors are helping bring it to a reality. Imagine playing a computer game in the quality seen in the movies of the 'Lord of the Rings'-series; absolute realistic lighting, details like in real life, believable skins and much more. ('Lord of the Rings'-Movie: Rendered image with ray tracing - Copyright Newline Cinema) One technique that was used creating the images for those movies is called 'ray tracing'. OpenRT OpenRT is a ray tracing library developed by the Computer Graphics Group of Saarland University. Ray tracing So, how does ray tracing work? A basic ray tracing scenario. From a virtual camera (denoted by the eye), primary rays are shot through every pixel on the screen.For every ray the intersection hitpointprimary with the object closest to the camera is calculated. Next Page - Quake 3: Ray Traced