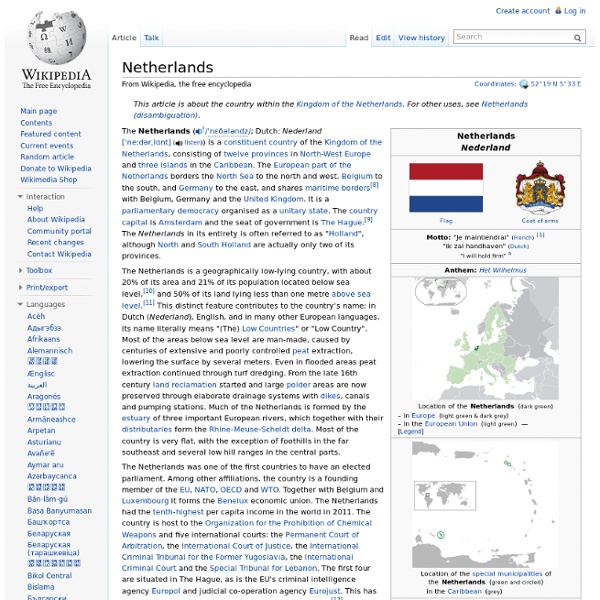 The Netherlands ( i/ˈnɛðərləndz/; Dutch: Nederland [ˈneːdərˌlɑnt] ( )) is a constituent country of the Kingdom of the Netherlands, consisting of twelve provinces in western Europe and three islands in the Caribbean. History[edit] Habsburg Netherlands (1519–1581)[edit] Under Charles V, ruler of the Holy Roman Empire and King of Spain, the current Netherlands region was part of the Seventeen Provinces of the Low Countries, which also included most of present-day Belgium, Luxembourg, and some land in France and Germany. In 1568, the Eighty Years' War between the Provinces and Spain began. Queen Elizabeth I of England sympathised with the Dutch struggle against the Spanish, and in 1585 she concluded a treaty with the Dutch whereby she promised to send an English army to the Netherlands to aid the Dutch in their war with the Spanish.[22] In December 1585, 7,600 soldiers were sent to the Netherlands from England under the command of Robert Dudley, 1st Earl of Leicester.

History of the Netherlands The history of the Netherlands is the history of a seafaring people thriving on a lowland river delta on the North Sea in northwestern Europe. Records begin with the four centuries during which the region formed a militarized border zone of the Roman empire. This came under increasing pressure from Germanic peoples moving westwards. As Roman power collapsed and the Middle Ages began, three dominant Germanic peoples coalesced in the area, Frisians in the north, Low Saxons in the northeast, and the Franks. During the Middle Ages, the descendants of the Salian Franks, the Carolingian dynasty, came to dominate the area and then extended their rule to a large part of Western Europe. By 1433, the Duke of Burgundy had assumed control over most of the lowlands territories in Lower Lotharingia; he created the Burgundian Netherlands which included modern Belgium, Luxembourg, and a part of France. Prehistory (before 800 BC)[edit] Historical changes to the landscape[edit] Iron age[edit]

m2+ Index of Economic Freedom 2008 - Netherlands The economy of the Netherlands is 76.8 percent free, according to our 2008 assessment, which makes it the world's 13th freest economy. Its overall score is 1.9 percentage points higher than last year, reflecting improved scores in five of the 10 economic freedoms. The Netherlands is ranked 6th out of 41 countries in the European region, and its overall score is much higher than the regional average. The Netherlands enjoys very high levels of investment freedom, trade freedom, financial freedom, property rights, business freedom, freedom from corruption, and monetary freedom. The average tariff rate is low; non-tariff barriers include European Union subsidies. Business regulation is efficient. The Netherlands could do better in government size and fiscal freedom. Background: The Kingdom of the Netherlands is a wealthy country and home to a number of prominent multinational companies. Business Freedom - 88% Trade Freedom - 86% Fiscal Freedom - 51.6% Freedom from Government - 38.2%

Men United Kingdom The United Kingdom of Great Britain and Northern Ireland,[nb 6] commonly known as the United Kingdom (UK) or Britain /ˈbrɪ.tən/, is a sovereign state located off the north-western coast of continental Europe. The country includes the island of Great Britain (a term sometimes also loosely applied to the whole state), the north-eastern part of the island of Ireland, and many smaller islands. Northern Ireland is the only part of the UK that shares a land border with another state: the Republic of Ireland.[nb 7] Apart from this land border, the UK is surrounded by the Atlantic Ocean, with the North Sea in the east, the English Channel in the south and the Irish Sea in the west. The UK's form of government is a constitutional monarchy with a parliamentary system,[9][10] and its capital city is London.[11] The current British monarch—since 6 February 1952—is Queen Elizabeth II. The UK has been a permanent member of the United Nations Security Council since its first session in 1946. History

LM1x Peter Galambos Péter Galambos (born 9 September 1986 in Vác) is a Hungarian rower. He won the silver medal in the lightweight single sculls at the 2012 World Rowing Championships. Galambos studies economics and management at Óbuda University in Budapest.[1] References[edit] External links[edit] Péter Galambos at RowingOne.com Men's 4 LM2X LM4X Greece Greece (Greek: Ελλάδα, Elláda, pronounced [eˈlaða] ( )), officially the Hellenic Republic (Ελληνική Δημοκρατία [eliniˈci ðimokraˈti.a] Ellīnikī́ Dīmokratía)[11] and known since ancient times as Hellas (Greek: Ἑλλάς), is a country in Southern Europe.[12] According to the 2011 census, Greece's population is around 11 million. Athens is the nation's capital and largest city. Modern Greece traces its roots to the civilization of Mycenaean Greece and is considered the cradle of all Western civilization. As such, it is the birthplace of democracy,[16] Western philosophy,[17] the Olympic Games, Western literature and historiography, political science, major scientific and mathematical principles,[18] and Western drama,[19] including both tragedy and comedy. Etymology The names for the nation of Greece and the Greek people differ from the names used in other languages, locations and cultures. History Earliest settlements to 3rd century BC Hellenistic and Roman periods (323 BC–4th century AD)

LM2- LM4- Denmark Denmark ( i/ˈdɛnmɑrk/; Danish: Danmark)[N 10] is a Scandinavian country in Northern Europe. The southernmost of the Nordic countries, it is located southwest of Sweden and south of Norway, and bordered to the south by Germany. The Kingdom of Denmark[N 11] is a sovereign state that comprises Denmark and two autonomous constituent countries in the North Atlantic Ocean: the Faroe Islands and Greenland. Denmark proper has an area of 43,094 square kilometres (16,639 sq mi),[9] and a population of 5,659,715 (January 2015).[3] The country consists of a peninsula, Jutland, and the Danish archipelago of 443 named islands,[10] of which around 70 are inhabited. The Constitution of Denmark was signed on 5 June 1849, ending the absolute monarchy which had begun in 1660. Etymology[edit] The first recorded use of the word Danmark within Denmark itself is found on the two Jelling stones, which are runestones believed to have been erected by Gorm the Old (c. 955) and Harald Bluetooth (c. 965). Government