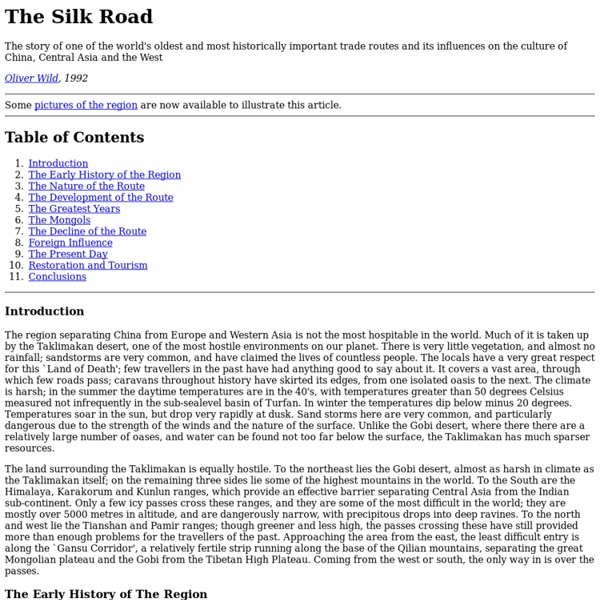 On the eastern and western sides of the continent, the civilisations of China and the West developed. The western end of the trade route appears to have developed earlier than the eastern end, principally because of the development of the the empires in the west, and the easier terrain of Persia and Syria. The Iranian empire of Persia was in control of a large area of the Middle East, extending as far as the Indian Kingdoms to the east. Trade between these two neighbours was already starting to influence the cultures of these regions. This region was taken over by Alexander the Great of Macedon, who finally conquered the Iranian empire, and colonised the area in about 330 B.C., superimposing the culture of the Greeks. Although he only ruled the area until 325 B.C., the effect of the Greek invasion was quite considerable. Close on the heels of the Parthians came the Yuezhi people from the Northern borders of the Taklimakan. The eastern end of the route developed rather more slowly. Related:  China • China

Silk Road: Map, Trade, History of Silk Road. Great Silk Road During the 6-14th century, there were thousands of large and small routes that crossed Asian Continent leading to the West. Caravans followed these routes and each was filled with exotic clothes, eastern goods and spices. These routes raised the Great Silk Road. Fascinating History of Silk Road History of Silk Road is fascinating and full of military conquest, fearless explorers, religious pilgrims and great thinkers, along with the humble tradesmen who risked life and limb for profit as they led their loaded caravans across dangerous deserts, mountains and steppes. Great Silk Road: Luxury Trade The story of silk trade is very cognitive. More Than Silk There are many other luxury goods besides silk that were transported along Silk Road. A Road of Ideas As merchants and other travellers traversed Silk Road, they also carried culture, art, philosophies and beliefs with them. More Silk Road links Silk-Road.com The Silkroad FoundationWikipedia.org Great Silk Road

ZTE ZTE Corporation is a Chinese multinational telecommunications equipment and systems company headquartered in Shenzhen, Guangdong, China. It is one of China's leading telecom equipment manufacturers.[2] It also offers products that provide value-added services,[4] such as video on demand and streaming media.[5] ZTE primarily sold products under its own name, but it is also an OEM.[6] ZTE is one of the top five largest smartphone manufacturers in its home market.[7] As with Huawei, the company has faced criticism in the United States over potential ties to the Chinese government that could enable surveillance. In 2017, ZTE was fined for illegally exporting U.S. technology to Iran and North Korea in violations of economic sanctions.[8] In April 2018, after the company failed to properly reprimand the employees involved, the U.S. History[edit] U.S. sanctions and import ban[edit] Later that month, the U.S. On 13 July 2018, the denial order was officially lifted.[40][41][42][43] PT. Zonergy[edit]

Silk Road - Introduction The Silk Road is a great East to West trade route and vehicle for cross-culture exchange started in the second century BC. It was first traveled by the adventure of Zhang Qian started the journey to the far West for the political contact with Yuezhi, a nomadic tribe, in 138 BC. But, it was only in 1870s that the geographer, Ferdinand von Richthofen gave the name by which we now know as the Silk Road. The general Zhang Qian was sent by Emperor Wudi of the Han Dynasty (206 BC- AD 220) to recruit the Yuezhi, who were the enemies of the Xiongnu in the second century BC. As Yuezhi tribe, Xiongnu was also a nomadic group who attempted to invade the Kansu province of Han Dynasty. Because the Xiongnu could not be restrained with any lasting effects, Emperor Wu decided to look for an alliance with Yuezhi who had been defeated by their enemies Xiongnu and driven to the Ili valley, the western fringes of the Taklamakan Desert.

Huawei Chinese technology company Huawei Technologies Co., Ltd. (; Chinese: 华为; pinyin: Huáwéi) is a Chinese multinational technology company headquartered in Shenzhen, Guangdong. It designs, develops, and sells telecommunications equipment and consumer electronics (mainly smartphones). [4] The company was founded in 1987 by Ren Zhengfei, a former Deputy Regimental Chief in the People's Liberation Army.[5] Initially focused on manufacturing phone switches, Huawei has expanded its business to include building telecommunications networks, providing operational and consulting services and equipment to enterprises inside and outside of China, and manufacturing communications devices for the consumer market.[6][7] Huawei has over 194,000 employees as of December 2019[update].[8] In the midst of an ongoing trade war between China and the United States, Huawei was restricted from doing commerce with U.S. companies due to alleged previous willful violations of U.S. sanctions against Iran. Name[edit]

Map of South-East Asia Southeast Asia is a subregion of Asia, roughly be described as geographically situated east of the Indian subcontinent, south of China and north of Australia, between the Indian Ocean (in west) and the Pacific Ocean (in east). Regions in South-East Asia It consists of two distinctive different geographic regions, one is mainland Southeast Asia, also known as Indochina, on the Indochinese peninsula; it comprises the countries of Cambodia, Laos, Myanmar (Burma), Thailand, Vietnam and West Malaysia (Peninsular Malaysia), the other is the Malay Archipelago, or Maritime Southeast Asia, which comprises the countries of: Brunei (on the island of Borneo), East Malaysia (with the Malayan states of Sabah and Sarawak on the northern part of Borneo), all the islands of Indonesia, the Philippines, Singapore and Timor-Leste (East Timor).

Meng Wanzhou Meng Wanzhou (Chinese: 孟晚舟; born 13 February 1972), also known as Cathy Meng and Sabrina Meng,[5] is a Chinese business executive. She is deputy chairwoman of the board and chief financial officer (CFO) of China's largest private company,[6] the telecom giant Huawei founded by her father Ren Zhengfei. On December 1, 2018, Meng was arrested at Vancouver International Airport by the Royal Canadian Mounted Police at the request of the United States for allegedly defrauding multiple financial institutions in breach of US imposed bans on dealing with Iran.[7] On January 28, 2019, the U.S. Department of Justice announced financial fraud charges against Meng.[8] Early life and education[edit] Meng Wanzhou was born February 13, 1972[9] in Chengdu, Sichuan, China.[5][10] She is the daughter of Ren Zhengfei and his first wife, Meng Jun. Career[edit] When Huawei first published the names of its top executives in 2011, Meng was already listed as its CFO. Detention[edit] Arrest and allegations[edit]