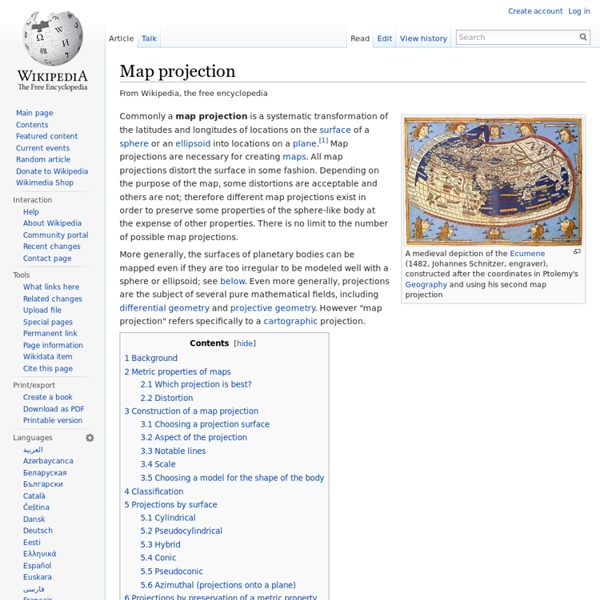 More generally, the surfaces of planetary bodies can be mapped even if they are too irregular to be modeled well with a sphere or ellipsoid; see below. Even more generally, projections are the subject of several pure mathematical fields, including differential geometry and projective geometry. However "map projection" refers specifically to a cartographic projection. Background[edit] Maps can be more useful than globes in many situations: they are more compact and easier to store; they readily accommodate an enormous range of scales; they are viewed easily on computer displays; they can facilitate measuring properties of the terrain being mapped; they can show larger portions of the Earth's surface at once; and they are cheaper to produce and transport. These useful traits of maps motivate the development of map projections. However, Carl Friedrich Gauss's Theorema Egregium proved that a sphere's surface cannot be represented on a plane without distortion. Metric properties of maps[edit]

2(a). Introduction to Maps Introduction A map can be simply defined as a graphic representation of the real world. This representation is always an abstraction of reality. Because of the infinite nature of our Universe it is impossible to capture all of the complexity found in the real world. For example, topographic maps abstract the three-dimensional real world at a reduced scale on a two-dimensional plane of paper. GPS eXchange Format GPX, or GPS eXchange Format is an XML schema designed as a common GPS data format for software applications. It can be used to describe waypoints, tracks, and routes. The format is open and can be used without the need to pay license fees. Its tags store location, elevation, and time and can in this way be used to interchange data between GPS devices and software packages.

Haversine formula The haversine formula is an equation important in navigation, giving great-circle distances between two points on a sphere from their longitudes and latitudes. It is a special case of a more general formula in spherical trigonometry, the law of haversines, relating the sides and angles of spherical triangles. The term haversine was coined in 1835 by Prof. James Inman. These names follow from the fact that they are customarily written in terms of the haversine function, given by haversin(θ) = sin2(θ/2). The formulas could equally be written in terms of any multiple of the haversine, such as the older versine function (twice the haversine).

Scavenger hunt A scavenger hunt is a party game in which the organizers prepare a list defining specific items, which the participants – individuals or teams – seek to gather all items on the list – usually without purchasing them – or perform tasks or take photographs of the items, as specified.[1] The goal is usually to be the first to complete the list, although in a variation on the game players can also be challenged to complete the tasks on the list in the most creative manner. According to game scholar Markus Montola, scavenger hunts evolved from ancient folk games.[2] Gossip columnist Elsa Maxwell popularized scavenger hunts in the United States with a series of exclusive New York parties starting in the early 1930s.[3][4][5] The scavenger-hunt craze among New York's elite was satirized in the 1936 film My Man Godfrey, where one of the items socialite players are trying to collect is a homeless man.[6]

Mercator Projection by Matt T. Rosenberg The Mercator projection was developed in 1569 by Gerardus Mercator as a navigation tool. Like the Peters map, the grid is rectangular and lines of latitude and longitude are all parallel. The Mercator map was designed as an aid to navigators since straight lines on the Mercator projection are loxodromes or rhumb lines -- representing lines of constant compass bearing -- perfect for "true" direction. Basic Uses of GIS Guest GIS Contributor Justine Nofal writes about some of the basic types of spatial analysis using GIS. A GIS (geographic or geospatial information system) allows you to record a base map with a geospatial referencing system such as longitude or latitude and then to add additional layers of other information. Importantly that information is identified using the same geospatial referencing. The GIS then allows the individual layers, or themes as they are called to be linked.

Polygon triangulation In computational geometry, polygon triangulation is the decomposition of a polygonal area (simple polygon) P into a set of triangles,[1] i.e., finding the set of triangles with pairwise non-intersecting interiors whose union is P. Triangulations may be viewed as special cases of planar straight-line graphs. When there are no holes or added points, triangulations form maximal outerplanar graphs. Polygon triangulation without extra vertices[edit] Over time a number of algorithms have been proposed to triangulate a polygon. Technological Pedagogical Content Knowledge Introduction[edit] Technological Pedagogical Content Knowledge (TPACK) is a framework to understand and describe the kinds of knowledge needed by a teacher for effective pedagogical practice in a technology enhanced learning environment. The idea of pedagogical content knowledge (PCK) was first described by Lee Shulman (Shulman 1986) and TPACK builds on those core ideas through the inclusion of technology. Punya Mishra, professor, and Matthew J.

Diving Into GIS: A Starter Guide The premise of a GIS is this: You take a basemap with features to help you visualize the geographic location, then add data layers, called "Feature Layers," that are delivered from a database. The records in the database include values and labels, as well as fields with X and Y values to geospatially tie the data into the map. More elaborate geospatial tie-ins are created with "Shapefiles." Hidden fields can be used too. Space-filling curve Three iterations of the Peano curve construction, whose limit is a space-filling curve. Definition[edit] Intuitively, a continuous curve in 2 or 3 (or higher) dimensions can be thought of as the path of a continuously moving point. To eliminate the inherent vagueness of this notion Jordan in 1887 introduced the following rigorous definition, which has since been adopted as the precise description of the notion of a continuous curve: A curve (with endpoints) is a continuous function whose domain is the unit interval [0, 1]. In the most general form, the range of such a function may lie in an arbitrary topological space, but in the most commonly studied cases, the range will lie in a Euclidean space such as the 2-dimensional plane (a planar curve) or the 3-dimensional space (space curve).

Textbook A textbook or coursebook (UK English) is a manual of instruction in any branch of study. Textbooks are produced according to the demands of educational institutions. Schoolbooks are textbooks and other books used in schools.[1][2] Although most textbooks are only published in printed format, many are now available as online electronic books. History[edit] The ancient Greeks wrote texts intended for education. The modern textbook has its roots in the standardization made possible by the printing press. How to Make an Amazing Treasure Hunt for Kids: 6 Steps Edit Article Whether it's too cold to play outside, a birthday party, or just an ordinary day, treasure hunts are a great, fun, and easy way to keep kids entertained. Here are ideas on how to stage a treasure hunt for kids. Ad